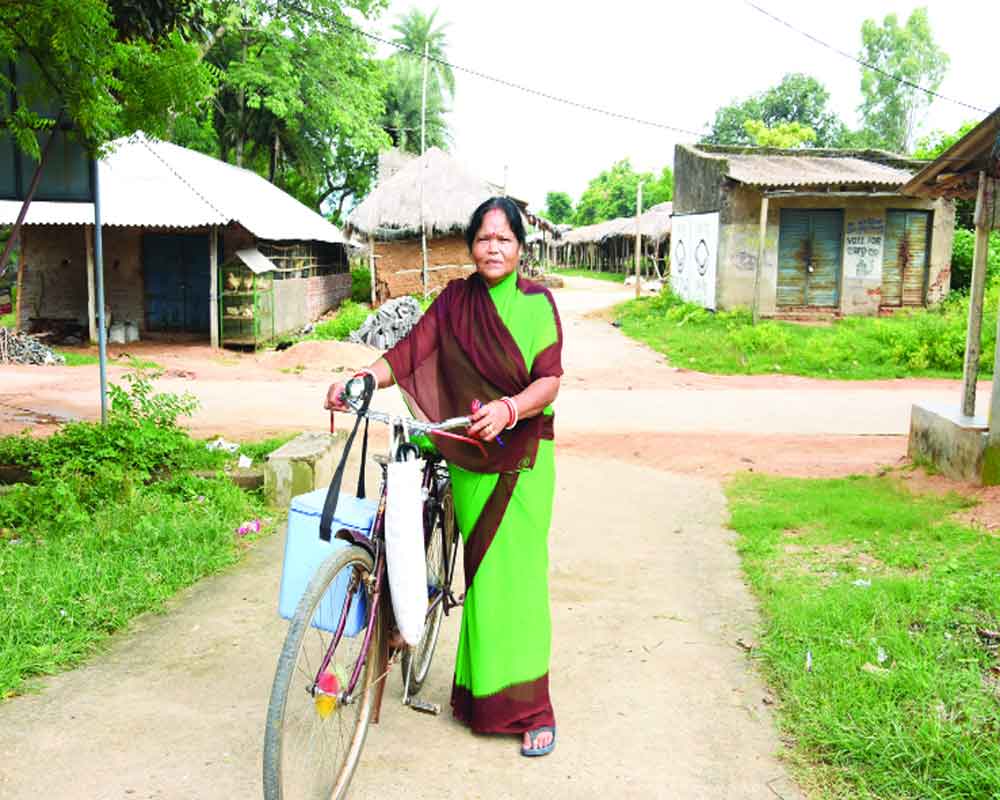 In the last ten years, there have been no maternal and infant deaths in areas under the care of ANM Naik. This is a big achievement for a State where the MMR of 180 for 100,000 live births is way above the national average of 130

It was about noon when Padmabati Naik, an Auxiliary Nurse Midwife (ANM), set off to check on a pregnant woman. It was a hot day and she was about to pull a water bottle out of her bag when she heard a noise. She quickly took refuge behind a tree and waited with bated breath as an elephant lumbered across the road. Once the pachyderm was out of sight, she breathed a sigh of relief and continued her journey.

This was not Naik’s first encounter with an elephant. As an ANM at a Primary Health Centre (PHC) located in Kaptipada block, a predominantly tribal area in Odisha’s Mayurbhanj district, Naik has to cross a forest to reach the villages scattered along the way. Although she has been traversing this path for the last 25 years, Naik still feels a bit nervous. However, this hasn’t stopped her from ensuring that all the 1,000 households under her charge receive timely health care.

It’s this dedication and determination that has brought down maternal and Infant Mortality Rates (IMR) in the areas where she works.

Over the last decade, there has been no maternal and infant death in the three villages and 33 hamlets under her care. This is a big achievement for a State where the Maternal Mortality Ratio (MMR) of 180 (for 100,000 live births) is way above the national average of 130.  Naik also steps in to conduct deliveries in the absence of a doctor. “I have received training to do so. I have conducted about 88 deliveries at the PHC. The women also feel confident as they know me. Since I monitor them from the beginning of their pregnancy, it helps me identify high risk mothers. When I feel these would-be mothers need specialised care, I give them red cards and refer them to the Government hospital in Cuttack. So far, 200 high risk mothers have had safe deliveries at the Cuttack hospital. In fact, all deliveries in my area have been in a health facility,” says Naik. Odisha has recorded a 45 per cent drop in IMR over the last 12 years. An analysis of the IMR trend over the  2005-17 period revealed that the State has reduced IMR from 75 for 1,000 live births in 2005 to 41 in 2017. However, it is still higher than the national IMR of 33.

In fact, the latest Sample Registration System survey 2017 data indicates that of every 1,000 children born in Odisha, 33 of them do not survive to celebrate their first birthday.

Sadly, Odisha has the third- highest IMR in the country behind Assam and Madhya Pradesh.

Naik is aware that her State lags behind others in the country and has made special efforts to follow up on the children. With immunisation being an important way to protect children from preventable diseases, disabilities and death, Naik has made sure that none of the 852 children in the zero to three age group, in the areas under her care, has missed vaccinations. This is why the work done by frontline health workers like Naik is vital to improving maternal and child mortality and morbidity, all key indicators of the health and well-being of women and children. Their work becomes critical especially for the marginalised communities living in difficult terrains, who often fall through the cracks.

In August 2019, Naik received the annual Plan India Impact Award for her commitment and dedication to bring down maternal and infant mortality.

“The award recognises the contribution of frontline health workers like Naik as well as volunteers and young people who have made a difference, and celebrates their roles as change makers in their communities. We wanted to honour the last mile champions who brave several challenges to bring about change. We received over 190 nominations from 21 States. After a rigorous evaluation process, nine national winners were chosen.  Naik has been honoured for her tireless efforts as an ANM to transform lives in her community,” says Anuja Bansal, Executive Director Plan India.

However, the fact remains that before transforming the community, Naik had to change herself. This came about after she realised that communicating health messages in Odia, the State language, was not having the desired effect. Naik realised that she had to learn the local language of the Santhal and Kolo tribes to build a rapport with the community.

“I could not expect them to learn Odia. So I learnt their language. It took some time but once I began speaking in their language, the awareness improved and change was quicker,” recalls Naik.

The first visible change came in the form of increased attendance at Village Health, Sanitation and Nutrition Day (VHSND). Prior to 2008, VHSND sessions had not been held in the area. But after Naik’s intervention, these sessions were started and attendance steadily increased.

“The women had never discussed reproductive and sexual health or menstrual hygiene before. They didn’t understand the importance of exclusive breast-feeding and nutrition. Child marriage is the norm among the community. But I was able to stop 15 such marriages. I am happy I could bring some change. But I want to do more,” says a beaming Naik.