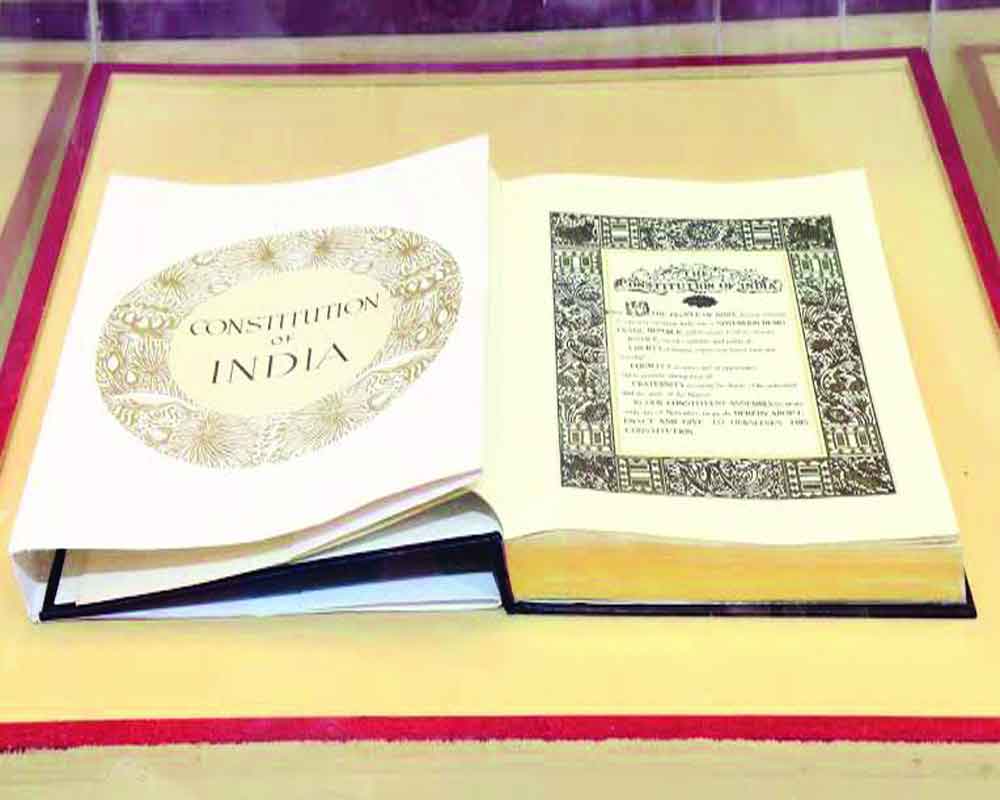 Over the past seven decades, great emphasis has been laid on fundamental rights as enshrined in the Constitution. It’s now time to turn the attention on fundamental duties

As India celebrated the Constitution Day on November 26, the country’s President, Ram Nath Kovind, Vice President Venkaiah Naidu and Prime Minister Narendra Modi drew the attention of the citizens to the chapter on fundamental rights in our Constitution.

Quoting Mahatma Gandhi, the President said, “The true source of rights is duty. If we all discharge our duties, right will not be far to seek. If leaving duties unperformed we run after rights, they escape us like a will-o’-the-wisp.” He said, fundamental duties remind the people of their moral responsibilities. “It can be said that the soul of the Constitution lies in its Preamble and in the parts pertaining to fundamental rights, directive principles and fundamental duties.”

Over the last seven decades, there has been great emphasis on Part III of the Indian Constitution, which deals with fundamental rights and rightly so. This chapter in our Constitution establishes the foundation on which our democracy rests. Several Articles in this chapter constitute the soul and substance of our democracy like the right to life and personal liberty (Article 21); the right to equality before law and the equal protection of the laws (Art 14); and the precious rights in Article 19, which give every citizen the right to freedom of expression, freedom of association, freedom of movement etc. This is the bedrock on which our democratic nation rests. The Supreme Court has stood like a sentinel guarding these rights.

While all this is welcome, the time has come for citizens to also turn their attention on fundamental duties, which is incorporated in Article 51 A. This Article, which was inserted via the 42 Amendment in 1976, was passed by Parliament during the dreaded Emergency. Ironically, this was one of the good additions and so was retained. Many of the other obnoxious provisions were removed later.

It enjoins upon all citizens to abide by the Constitution and respect its ideals and institutions, the National Flag and the National Anthem; to cherish and follow the noble ideals which inspired the national struggle for freedom; to uphold and protect the sovereignty, unity and integrity of India; to defend the country and render national service when called upon to do so; to promote harmony and the spirit of common brotherhood among all the people of India transcending religious, linguistic and regional or sectional diversities; to renounce practices derogatory to the dignity of women; to value and preserve the rich heritage of our composite culture; to protect and improve the natural environment including forests, lakes, rivers and wild life and to have compassion for living creatures; to develop the scientific temper, humanism and the spirit of inquiry and reform; to safeguard public property and to abjure violence; to strive towards excellence in all spheres of individual and collective activity so that the nation constantly rises to higher levels of endeavour and achievement; and for those who are parents or guardians to provide opportunities for the education of the child between the age of six and 14.

As can be seen from this list, while fundamental rights have strengthened our democracy, fundamental duties are essential to strengthen our society. Adherence to these duties will ensure common brotherhood, fortify India’s unity and integrity and improve the quality of life. A good understanding of fundamental duties is a must also because we are not only the world’s largest democracy but also the most diverse society in the world.

In this context, Vice President Venkaiah Naidu’s suggestion that fundamental duties must be introduced at an appropriate level in the curriculum and that these duties should be displayed at all educational institutions, offices and public spaces, is worthy of serious consideration.

Prime Minister Narendra Modi, who took the decision  four years ago to declare November 26 as the Constitution Day, has ensured that there is greater awareness of the Constitution among the citizenry. He has now added fresh vigour to this campaign by turning the spotlight on fundamental duties. He said in his address on Constitution Day that while there was great emphasis on fundamental rights over the last seven decades, the time had come for citizens to also pay attention to their duties. He is of the view that “we cannot preserve our rights without fulfilling our responsibilities.”

Few countries in the world have such an elaborate list of fundamental duties in their constitutions. But many nations prescribe defence of the country as a national duty. For example, Article 109 of the Norwegian Constitution stipulates that as a general rule, every citizen of the State is equally bound to serve in the defence of the country for a specific period, irrespective of birth or fortune. The application of this principle and the restrictions to which it shall be subject, shall be determined by law.

Under Article 81 of the Constitution of Denmark, “Every male person able to bear arms shall be liable with his person to contribute to the defence of his country under such rules as are laid down by statute.”

In fact, the foundations of the French Republic rested not only on the rights of man but also duties. It said the maintenance of society requires that those who compose it should both know and fulfill their duties.

Although they are not enforceable by writs, in several judgments, the Supreme Court has sought to creatively use the provisions in Article 51 A. For example, it is of the view that fundamental duties prescribed for citizens apply to the State as well. It has said that under Article 51 A (g), it is the duty of the Central Government to introduce compulsory teaching of lessons at least for one hour in a week on protection and improvement of natural environment in all the educational institutions in the country (MC Mehta (2) vs Union of India, 1987 SCR (1) 819).

In another case, it referred to the fundamental duty to strive for excellence and said excellence meant surpassing merit, virtue, honest performance, dignity and eminence. “Constitutional law-givers have provided that the citizens of this great nation shall perform their duties in an excellent way than performing it half-heartedly.” The performance of these duties fall within the Constitutional Law.

So, it’s now time to turn the spotlight on an important Article in our Constitution that has remained dormant for long so that the citizenry develops a balance between rights and duties.