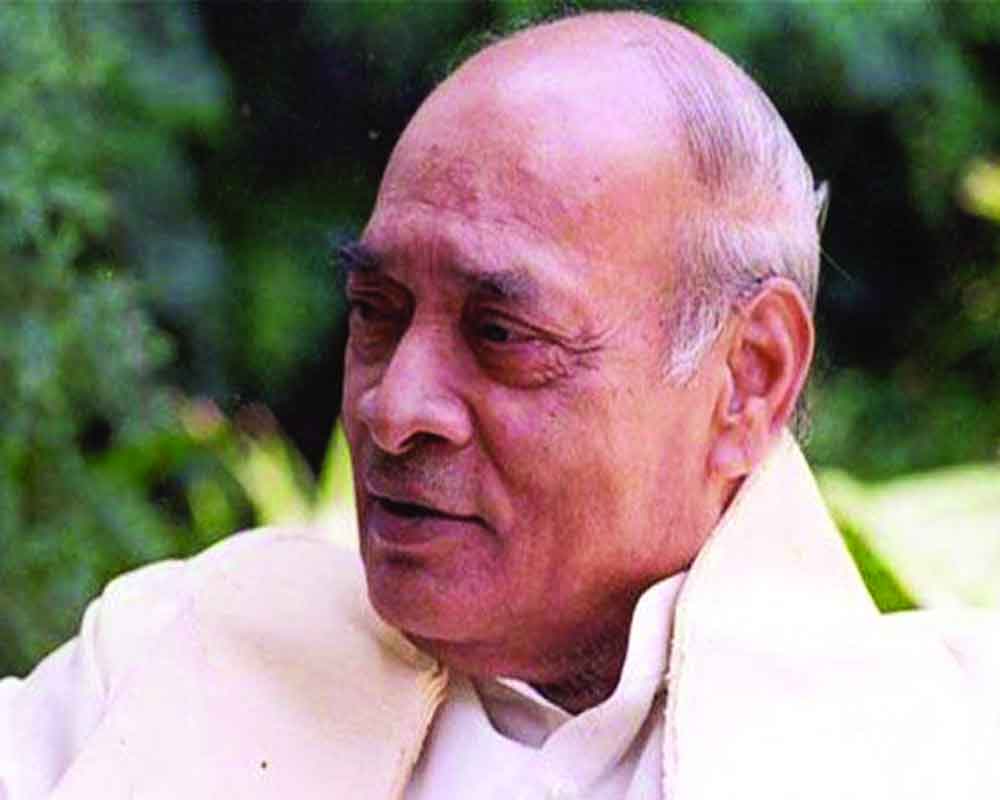 The tragic end of the Congress’ greatest intellectual leader, PV Narasimha Rao, can never erase the contribution he made to redefine the journey of a modern, powerful India

Most of us visualise PV Narasimha Rao as a frail old man but he was a firebrand activist during his youth, engaging in guerrilla-type insurgency to topple the Nizam of Hyderabad. The angry young man subsequently rose to become the Prime Minister of the world’s largest democracy. Rao’s calibre and competence can be equated with Jawaharlal Nehru’s gold standards in politics. The tale of perhaps India’s two best Prime Ministers is contradictory yet fascinating. Nehru and Rao did not have much in common except that both were intellectuals. Nehru’s intellectualism was shaped by Harrow, Cambridge and Lincoln’s Inn; by Bernard Shaw, Russell and the Fabians. He probably dreamt in English. The title of his book, The Discovery of India, is a disarming confession of his need for discovering the land of his birth. Rao’s intellectual centre, on the other hand, was India. Unlike Nehru, his knowledge of Sanskrit was profound. He was a man of learning, a scholar, a linguist and a thinker of the first order. His roots were deep in the spiritual and religious matrix of India.

Rao was a man of the soil. From humble social origins, he rose to become the ninth Prime Minister from 1991 to 1996. As a teenager, he was part of the Vande Mataram movement in the Hyderabad of the late 1930s. Rao was a polyglot — aside from his mother tongue, Telugu, he had excellent command over several other languages — nine Indian and six foreign. His political career was shaped by his involvement in India’s struggle for independence. His early mentors included Nehru and Indira Gandhi. He was the most trusted advisor to the latter, having impressed her with his intellectual prowess. Former Law Minister HR Bharadwaj acknowledged that Indira Gandhi always depended on Rao’s intellect to navigate her Government’s policies and party’s machinery. She appointed him the country’s Foreign Minister in 1980. This gave him a big break. With his penchant for picking up languages, Rao fitted snugly into the high-flying world of international diplomacy despite being a teetotaller and a vegetarian. In 1986, Rao, as Human Resources Development Minister, formulated the National Policy on Education on his newly-acquired word processor in six months. However, he was unable to push for funds to implement the ambitious policy, which included the Navodaya schools.

By the summer of 1990, Rao was preparing to retire from public life and had packed his bags to move home to Hyderabad when Rajiv Gandhi was assassinated by LTTE sympathisers. Suddenly, circumstances catapulted Rao into the country’s top job. His ascendancy to the Prime Ministership was politically significant in that he was the first holder of this office from a non-Hindi-speaking region, the South. Rao was supposed to collapse soon — if not under his advancing age, then from pressure from multiple sources. Instead, he lasted the full five-year term, turned the economy around, brought normalcy to Punjab and stamped his authority by virtually pushing detractors to the wall to be the real centre of power in the Congress. How did he manage this feat? What led to the transformation of a timid party worker more willing to follow than lead as a decisive head of Government? How did the change of heart from a Left-leaning protectionist to a free market champion happen? What techniques did he apply to have his way in a party that largely had little regard for him? This happened in a year of multiple changes and challenges. India and the world were in turmoil and grappling with change, the historical significance of which was not immediately understood by many.

Similarly, we hold Rao in high regard for his Right-wing, pro-capital reform measures for opening up the economy to liberalisation, privatisation and globalisation. But he was a fierce advocate and practitioner of socialism when he was the Chief Minister of Andhra Pradesh. His bold reforms for redistribution of land to the poor and downtrodden as also his strict enforcement of the land ceiling Act created such a strong backlash from established big landlords that Indira Gandhi had to take him back from State politics as a Minister in the Union Cabinet and declare President’s rule in Andhra Pradesh for some time. So it is extremely wrong to paint Rao as a Right-wing politician just because he was an architect of economic reforms.

The economic crisis of 1991 was the consequence of a political impasse India found itself in. A series of political and economic events of 1980s came to a head around 1990-91. India was on the verge of defaulting on its external payments obligations, with foreign exchange reserves dwindling rapidly as oil prices went up, exports went down and non-resident people began withdrawing their deposits in foreign currency accounts in India. While this situation can, in part, be attributed to unexpected and extraneous factors like the Gulf War of 1990-91, the difficulty was almost entirely on account of political brinkmanship and populism. The responsibility for the events that combined to push India to the brink of default must lie with Rajiv Gandhi, VP Singh and Chandra Shekhar and it was left to Rao to arrest the slide and clean up the mess. The credit for understanding the seriousness of the situation and acting in time goes to him alone.

Adopted to avert the impending 1991 economic crisis, the reforms progressed furthest in the areas of opening up to foreign investment, capital markets, deregulating domestic business and altering the trade regime. His Government’s goals were to reduce fiscal deficit, privatise the public sector and increase investment in infrastructure. Trade reforms and changes in the regulation of foreign direct investment were introduced to open India to foreign trade while stabilising external loans. Rao chose Manmohan Singh for the job: An acclaimed economist, he played a central role in implementing these reforms. The impact of these changes may be gauged from the fact that total foreign investment (including foreign direct investment, portfolio investment and investment raised on international capital markets) in India grew from a minuscule $132 million in 1991-92 to $5.3 billion in 1995-96. Rao began industrial policy reforms with the manufacturing sector. He slashed industrial licensing, leaving only 18 industries subject to licensing. Industrial regulation was rationalised.

Rao, who held the Industry portfolio, was personally responsible for dismantling the Licence Raj, as this came under the purview of the Ministry of Commerce and Industry. For this, he is often called the “father of Indian economic reforms” although his own party refuses to acknowledge it. He was, in fact, the author of the most radical shift in India’s economic policy since Nehru’s famous Industrial Policy Resolution of 1956. Nehru’s resolution had declared that India would strive to establish a “socialistic pattern of society.” In 1991, Rao moved away from that pattern to unleash private enterprise.

Rao increased military spending and set the Indian Army on course to fight the emerging threat of terrorism and insurgencies as well as Pakistan and China’s nuclear potential. It was during his term that terrorism in Punjab was finally decimated. It is said that Rao was “solely responsible” for the decision to hold elections in Punjab, no matter how narrow the electorate base would be. Rao’s Government introduced the Terrorist and Disruptive Activities (Prevention) Act, India’s first anti-terrorism legislation.

He even strengthened diplomacy, making overtures to Western Europe, the US and China.  Way back in1992, he decided to bring into the open India’s relations with Israel, which had been kept covertly active for a few years during his tenure as a Foreign Minister. Israel got to open an embassy in New Delhi. He ordered the intelligence community in 1992 to start a systematic drive to draw the international community’s attention to Pakistan’s sponsorship of terrorism against India and not to be discouraged by American efforts to undermine the exercise. Rao initiated the ‘Look East policy’ with three objectives in mind, namely to renew political contacts with the ASEAN member nations; to increase economic interaction with Southeast Asia in trade, investment, science and technology and tourism; and to forge strategic and defence links with several countries of Southeast Asia. He decided to maintain distance from the Dalai Lama in order to avoid aggravating Beijing’s suspicions and concerns and made successful overtures to Tehran. The ‘cultivate Iran’ policy was pushed through vigorously by him. These policies paid rich dividends for India in March 1994, when Benazir Bhutto’s efforts to have a resolution passed by the UN Human Rights Commission in Geneva on the human rights situation in Jammu & Kashmir failed, with opposition by China and Iran.

In spite of significant achievements in a difficult situation, the Indian electorate voted out Rao’s Congress party in the 1996 general elections. Soon, Sonia Gandhi’s coterie forced Rao to step down as party president. Receding into forced oblivion, he died on December 9, 2004. But the Congress insulted a loyalist even in his death, simply because he didn’t figure in the dynastic paradigm of the party. It is alleged that the closest aides of Sonia Gandhi ensured his body was not allowed inside the AICC building and moved to Hyderabad. The grand old party ignored the debt it owed to the “Brihaspati (wise man) of Andhra Pradesh.” On multiple occasions, Sonia praised contributions of all Congress Prime Ministers except Rao in her various speeches. Even today, the Congress leadership shows extreme reluctance to acknowledge the role played by Rao to bail the Indian economy out of a severe crisis.

Rao was India’s first “accidental” Prime Minister and a path-breaking one. He took charge of the national Government and restored political stability; assumed leadership of the Congress, proving that there was hope beyond the Nehru-Gandhi dynasty; pushed through significant economic reforms; and steered India through the uncharted waters of the post-Cold War world. While the Congress has distanced itself from him, the current Prime Minister Narendra Modi has acknowledged his contribution in nation-building.

A simple man, Rao deployed Chanakya like tactics and strategies in dealing with the minority status of his Government, winning over support at times through questionable means. He was a man of simple tastes but with a complex mind.

Vinay Satpati, his biographer, has done an admirable job of putting up the thought process of the original “accidental Prime Minister” and the good and bad which came from that accident. In the end, though, the good is so overwhelming that the bad must take a back seat. To quote Sitapati, “His legacy lives on…his half-burnt body continues to glow.”  To sum up PV in a line, “he had Pandit Nehru’s intellectual capacity and Sardar Patel’s administrative calibre.”

(The writer has worked closely with the late Prime Minister of India; is Editor-in-Chief of Opinion Express and a columnist with The Pioneer)