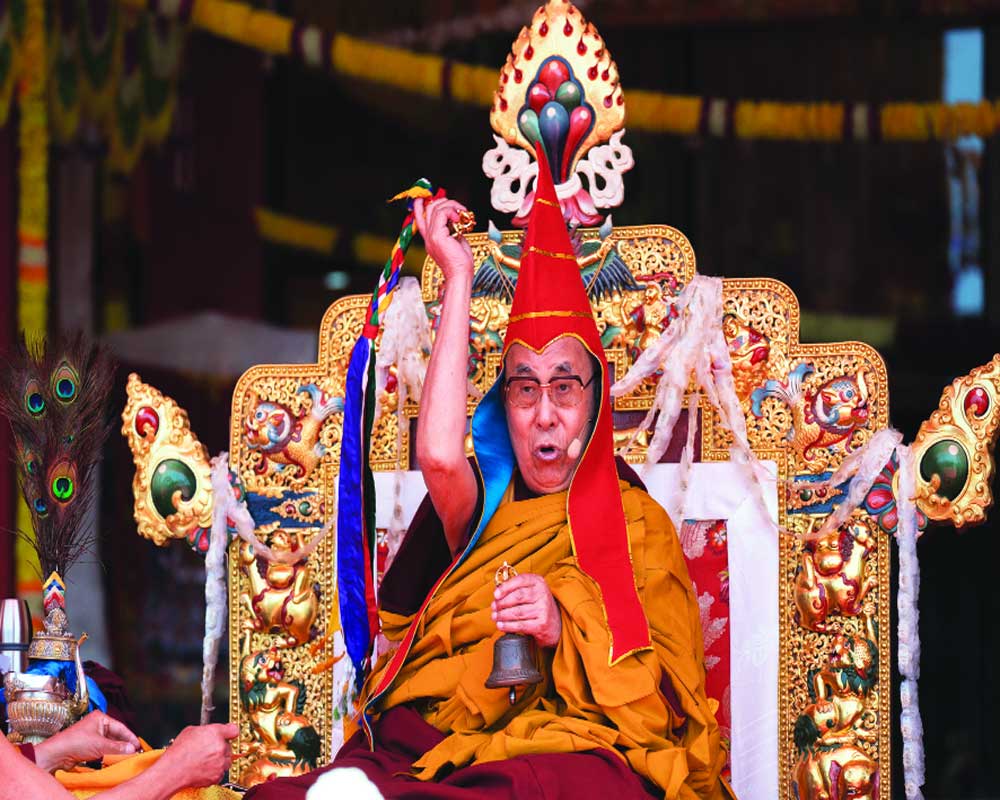 Tibetans should be left alone to decide their spiritual future but even if India does not interfere, it does have high stakes in the issue, particularly in connection with the Himalayan region

A few months ago, a board was placed outside a monastery in Tibet; it stated that Government officials and communist cadres were not allowed to enter the premises of the gompa as the Chinese State was atheistic. One can understand that the Communist Party of China (CPC), which religiously follows the precepts of its founding fathers, is not in favour of any spiritual practices. More recently, the CPC issued a notice banning retired Tibetan Government employees from taking part in any religious activities.

According to Human Rights Watch, the notice required “all Tibet Autonomous Region (TAR) Government and retired Government employees — regardless of whether those retirees are party members — to submit a list by August 18 of any ‘retired personnel performing the kora’, the Tibetan practice of circumambulating a sacred site.” Though the People’s Republic of China is atheist by definition and does not believe in the return of a soul, it now wants to control the reincarnation of the Tibetan Lamas. Read the “management measures for the reincarnation of living Buddhas in Tibetan Buddhism” notified by the State Council on July 13, 2007, and you will understand.

Article 1 spoke of “protecting religious concord and social harmony and protecting the normal order of Tibetan Buddhism.” It asserted: “Reincarnating living Buddhas should respect the religious rituals and historically established systems of Tibetan Buddhism.” It insists on an old ritual rarely used, the Golden Urn, which can easily be manipulated. Further, “Reincarnating living Buddhas shall not be interfered with or be under the dominion of any foreign organisation or individual.” In other words, the Dalai Lama is not allowed to be reborn in India.

Is China an atheist or a religious State? The answer is: It depends on the interests of the party. When it is convenient, it follows the Marxist orthodoxy but when its interests differ, the CPC becomes an expert in religious practices, particularly in the “reincarnation” process. Already in 2015, Padma Choling, the then Chairman of the Standing Committee of the TAR People’s Congress and then the only “ethnic” Tibetan and a member of the CPC’s Central Committee, created a flutter when he declared: “It’s not up to the Dalai Lama to decide about his own reincarnation.” He objected to an announcement by the Lama that “his traditional religious role should cease with his death.” Choling affirmed that the Lama’s renouncement was against “the Tibetan Buddhism tradition as the soul of a senior Lama is [always] reincarnated in the body of a child on his death.”

Marx would have shuddered in his tomb had he heard Choling utter this blasphemy. But this does not disturb the Communist leaders “in the new era.” Today, they argue that one can be Marxist and capitalist at the same time. A recent development brought some clarity. On November 29, the Dalai Lama addressed the issue of his reincarnation at a three-day Tibetan Religious Conference, a gathering of 117 Tibetan Buddhist and Bon senior leaders, in Dharamsala. During the closing ceremony, the Tibetan spiritual leader told the Rinpoches that there was no hurry to talk about his reincarnation. He affirmed, “I am fine physically and mentally — is there any hurry to talk about my reincarnation?” He added that he will consult his advisors to decide on his reincarnation when he turns 90.

This is a welcome change from some contradictory statements he had made earlier, particularly those like he was not keen to “return”, that the system was “medieval” or that he would come back as a woman.

On the first day of the conference, the assembled Lamas passed an important three-point resolution to counter China. The first point mentioned was the Karmic bond between the Dalai Lamas and the Tibetan people, which is “unbreakable.” It added that all Tibetans “genuinely wish for the continuation of the institution and reincarnation of the Dalai Lama in the future.” The Lama was supplicated to “come back.”

The second point made it clear that “the authority of decision concerning the way and the manner in which the next reincarnation of the 14th Dalai Lama should appear solely rests with His Holiness, the 14th  Dalai Lama himself. No Government or otherwise will have such authority.” It was the best way to counteract Beijing’s stance (and new religious “skills”).

The third point the monks’ gathering urged was that “the same unique Tibetan traditional method, which has been continuously used until now, will be followed.”

Though it says that this method conforms to “the basic philosophy and tenets of the Buddha dharma and originated in Tibet over 800 years ago,” no details were provided, leaving the door open to possible manipulation by China. Incidentally, it is regrettable that among the 117 senior monks, the feminine gender was not represented. This is probably one of the reasons why the Dalai Lama terms the system as “medieval.”

The Chinese are aware that the reincarnation system is not purely a religious affair; it has always had a political angle. One historical example is the strife between the ninth Panchen and the 13th Dalai Lama, which revolved around taxes to be paid by the Panchen Lama estate to the Dalai Lama’s Government. As a result of the dispute, the Panchen took refuge in China in 1923; he was well-looked after by the Kuomintang, who had an eye on Tibet. A Chinese scholar recently wrote that “the treatment of the ninth Panchen Lama was further enhanced in response to [China’s] needs on the border [with India]. In June 1931, the National Government appointed the ninth Panchen Lama as an Ambassador and set up an agency which was given a hefty monthly budget of 15,000 yuans.”

The Panchen Lama himself received 120,000 yuans monthly. It was not a salary, said the scholar, but “for his personal expenses and the living expenses of his followers and monks.”

The fact that the US Congress recently passed a Bill on the succession or reincarnation of the Dalai Lama and other Tibetan Buddhist leaders shows that it is still a highly political issue today. The Tibetans should be left alone to decide their spiritual future but even if India does not interfere, New Delhi does have high stakes in the issue, particularly in connection with the Himalayan region where Buddhism has so far played a stabilising role. The Dalai Lama is hopefully aware of this.