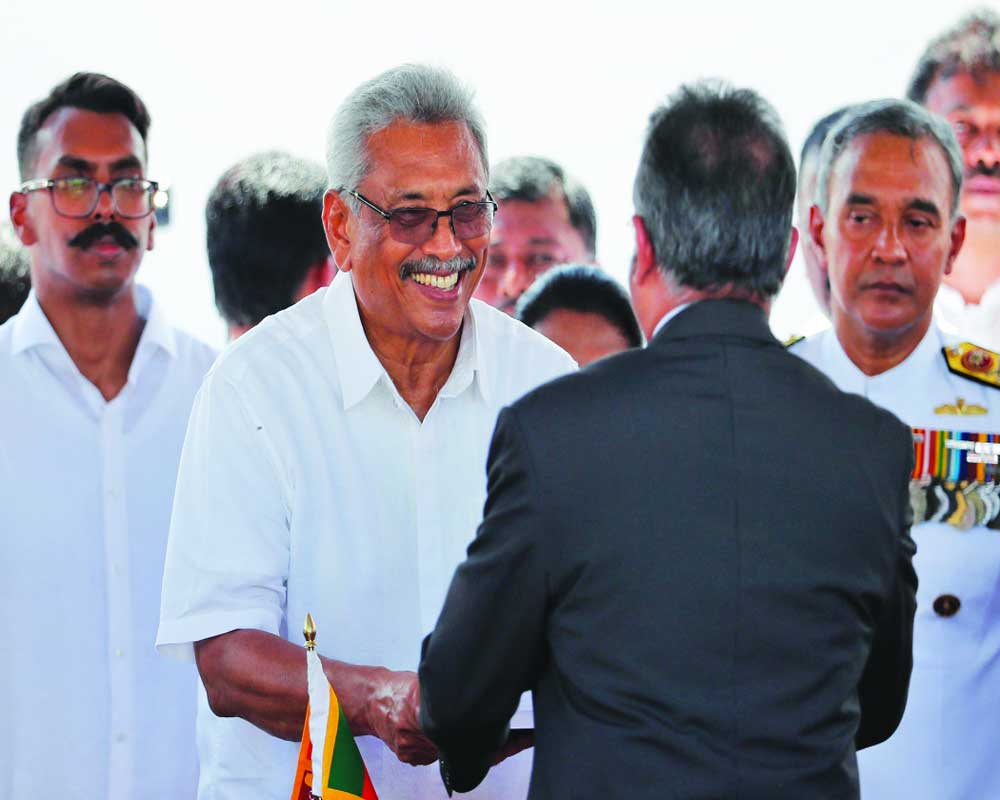 Sri Lanka’s new President Gotabaya has vowed to maintain neutral but friendly relations with foreign powers. He must be judged by his deeds, not words

Gotabaya (Gota) Rajapaksa’s decisive victory in the presidential election was not entirely surprising though it has shocked the liberals in Colombo, becoming the most ethnically polarised verdict. Gota has shown that presidential elections can be won without the ethnic minority vote. Ever since the Mahinda Rajapaksa regime was voted out  of power in 2015 and following the passage of the 19th Amendment, Gota’s choice was natural as 19A had ruled out a third term for the President and raised the bar for age to 35 years, thus rendering Mahinda and his son Namal Rajapaksa ineligible for contesting the presidential election.

For an Army Colonel, Gota’s decade as the Defence Secretary to elder brother and former President Mahinda Rajapaksa facilitated the straightening of many wrinkles in defence and national security, though many of his Army colleagues and friends had turned adversaries. By the time Gota became a presidential hopeful, he was accused of corruption, human rights violations during the war, “white van” disappearances, murder of the editor of a newspaper and linkages to a Buddhist extremist group targetting Muslims. But his image as a war hero endured.

Gota won exclusively on the plank of national security. The catastrophic Easter Sunday bombings by radical Islamists linked to Islamic State (IS) were the result of infinite bungling by an incumbent Government already charged with lackadaisical performance. The clamour for  return of the Rajapaksas, who had ushered in a decade of peace, began to pick up. Gota sensed his moment. He blamed the Government for dismantling the intelligence apparatus he had established across the country for surveillance and early warning. The bombings were a clear systemic failure.

As President, Commander-in-Chief of the armed forces, Defence Minister or whichever portfolio he assigns to himself, Gota’s first task will be to ginger up the intelligence network and reinstate the intelligence grid and to eliminate the residual sleeper cells of the IS linked to radicalised Muslims in Sri Lanka. The reorganisation of higher defence management, which had become esoteric under his predecessor, is bound to be revamped. The post-Easter Sunday appointments of the chief of national intelligence, Inspector General of Police and Defence Secretary, who report directly to the President, will be reviewed.

Gen Shantha Kottegoda, whose term as Army Commander was prematurely terminated in mid-2000 to accommodate Gen Sarath Fonseka, is current Defence Secretary. The extended term of Chief of Defence Staff, Admiral Ravi Wijegunaratne, a war hero who had to go to jail, ends next month and he may get an extension. Army Chief, Lt Gen Shavendra Silva, another war hero whose appointment in August attracted Western criticism on account of alleged human rights violations, will certainly get an extension beyond December.

As pledged, Gota will likely arrange the release from jail of military intelligence officials under trial. Similarly, he will end speculation over any domestic or international investigation about alleged war excesses and also close the United Nations Human Rights Council (UNHRC) resolution dated January 30, 2015, co-sponsored with the US — which has already quit the council — on post-war transitional justice and reconciliation. Most of the military is jubilant about Gota’s return. So excited was the Army that it reportedly endorsed Gota’s presidential candidature in a newspaper advertisement.

Simultaneous with alterations in defence and security architecture, Gota will use his executive and persuasive powers to change the Government and make Mahinda the Prime Minister. This can happen in two ways: First by Prime Minister Ranil Wickremesinghe and his Cabinet resigning in the aftermath of his party’s electoral defeat. Ministers aligned with the presidential loser Sajith Premadasa have already resigned and have urged Wickremesinghe to quit, who  said he will consider. A snap election could follow.

Second, according to the 19th Amendment, the President can dismiss the Government four-and-a-half years into its term, which is sometime in February 2020 to pave the way for a new Parliament by August 2020.

Either way, Mahinda will now certainly be the next Prime Minister. And as he recently told a Tamil newspaper: “PM is the real power.” The last and only time two brothers have been President and Prime Minister together was a decade ago in Poland with twins — the Kaczynskis. By abolishing the 19th Amendment with a two-thirds majority, the Rajapaksas and the Sri Lanka People’s Party (SLPP) may rule, preferably by  taking minorities along, till kingdom come.

Gota must also attend to the declining economy crippled by the IS-linked terrorist attacks. Soon after the war, the economy was zipping at eight per cent growth. The central bank bonds scam under the Wickremesinghe Government was the proverbial last straw that broke the people’s confidence in the Government.

Multi-lateral financial agencies are uniformly predicting GDP slipping below the International Monetary Fund’s (IMF) growth forecast of 3.5 per cent for 2019.

The Governor of the Central Bank of Sri Lanka has warned of a Greece-like crisis unless deep structural reforms are implemented. Colombo’s total indebtedness to Beijing is unknown but is estimated at 60 per cent of all foreign borrowings. Mahinda had given very generous concessions to China, resulting in both Hambantota and the Colombo Port City projects being leased to Chinese companies for 99 years. China and Sri Lanka decided last month to establish an international financial

centre — to rival India’s planned international financial centre in Gandhinagar — halfway between Dubai and Singapore. Notwithstanding its viability, the financial centre will give China another foothold in Sri Lanka.

Where does the landmark regime change in Sri Lanka leave India given that it was instrumental in dislodging Mahinda in 2015? This time around, India’s non-interference is impeccable. With the Rajapaksa redux, it is easy to paint doomsday scenarios. The Rajapaksa’s indebtedness to Beijing started  during the war when New Delhi rejected several requests from Colombo for military hardware to fight the Liberation Tigers of Tamil Eelam (LTTE). It was China and Pakistan, who bailed them out. Upon which India had mocked Lanka for approaching these countries when it was willing to supply only non-lethal stores in deference to domestic political compulsions in Tamil Nadu. The strategic cost of India’s hedging lingers though that constraint is gone. Gota famously described New Delhi’s non-interference in the war as “management” of India. China’s ingress in Sri Lanka predates Rajapaksas. Hambantota was offered twice to India. The rest is history.

It will be unwise to go by the track record of a feisty  wartime defence secretary, who as part of the famed troika with brother Basil and Secretary to President Lalith Weeratunga, dealt with an intransigent India. Now President Gotabaya Rajapaksa, who has said he will be “neutral but friendly” in foreign relations, must be judged by his deeds not words. Like Nepal, geography and history militate against Sri Lanka being hostile to India.