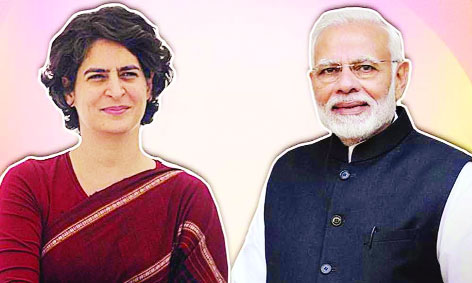 Priyanka Gandhi Vadra may have taken the political plunge but the million dollar question is, will the Congress field her against Prime Minister Modi? It will make for a tantalising contest but will the party take the risk?

The buzz in the Congress’ circles is that general secretary Priyanka Gandhi Vadra may make her electoral debut by contesting against Prime Minister Narendra Modi in Varanasi. The Congress’ leadership is tight-lipped about it although Priyanka has herself kept the mystery alive. When party workers in Rae Bareli recently urged her to contest the elections, she responded by asking if she should contest from Varanasi. Reports that the Congress could field Priyanka from Varanasi have been doing the rounds since the last few days. The party on Saturday said that it would not comment on hearsay and that media would be informed if any such decision was taken.

The question is: Will she take the electoral plunge? After all, it took so many years for her to enter politics. The Gandhi family is very cautious about when to enter politics and from where. The family is quite calculative about these matters. These things are choreographed well. Even Sonia Gandhi took seven years to decide and she took the plunge only in 1998 when the party was almost withering away and needed a charismatic leader. She was bold enough to enter politics when the party was languishing in the Opposition with no chances of immediate revival. Though she joined the electoral fray in 1999 and became the first woman Leader of Opposition, she took on the BJP on issues despite being a novice. She developed a reasonable understanding with former Prime Minister Atal Bihari Vajpayee and then surprised every one by leading the UPA, which came to power for two consecutive terms, thus shattering the BJP’s “India shining” dreams.

Similarly, Rahul Gandhi entered politics in 2004, contested from Amethi and won the family’s bastion. He has been in politics since then and was made the general secretary in 2007 and vice president in 2013. Last year, he took over as party president. This will be the first time he will be leading the party to the polls and, therefore, it is crucial that he does well.

Priyanka’s entry into politics was also a calculated move and the timing was a surprise; though people had been wanting since many years that she join the party. Seen as a more charismatic leader than Rahul, it was speculated that she was staying away for fear of overshadowing her brother. Anyway, now that Sonia Gandhi has decided to take a back seat, Priyanka has taken the plunge.

The decision to contest is entirely left to the family. Whether it is a good move to field all the three Gandhis is a question that the family will consider. But the chorus from Uttar Pradesh is becoming shrill day by day. Party leaders and workers from the State argue that the move will enhance the Congress’s poll prospects.

Initially, it was believed that if Sonia Gandhi bowed out, her daughter would contest from Rae Bareli. The party’s Allahabad unit had passed a formal proposal, urging the Congress’ leadership to field Priyanka from Phulpur, which was represented by her great grandfather and India’s first Prime Minister Jawaharlal Nehru. This might still happen as Priyanka is likely to fare better in Phulpur. Defeating Modi may be difficult as he is still popular in Varanasi. Also, traditionally, barring once in 2004, the BJP has won Varanasi comfortably since 1991. Then came the speculation strengthened by Priyanka herself. Responding to a frequently asked question whether she would contest, Priyanka surprised the media with a direct “why not” “even you can” and added, “If my party wants me to contest polls, then I will definitely do so.” Congress workers believe that she has a striking resemblance with her grandmother Indira Gandhi and would be a good vote-catcher. Priyanka is more connected to the people in her interactions and she is a crowd puller.

A section in the party also believes that if Priyanka contests from Varanasi, Modi can be pinned down to campaigning in this seat. Second, since there is no Modi wave, it may be easier for Priyanka to face him. Third, about four lakh votes were split against Modi in 2014. If Priyanka is fielded as a joint candidate of the Congress, Samajwadi Party, Bahujan Samaj Party and Rashtriya Lok Dal, a division of votes can be avoided. Fourth, she would be a fresh face with the Gandhi mystique. The party has not announced any name so far for both Varanasi and Phulpur. Incidentally, both Rahul and Priyanka are building the ground for the 2022 Assembly polls and seems like she could be its Chief Ministerial candidate. “We are preparing the ground for 2022 Assembly elections” Priyanka clarified herself.

Prime Minister Modi’s response to Priyanka contesting against him was: “In a democracy, anyone can contest from anywhere. I don’t fear about who is contesting from where, it doesn’t matter to me.” Modi versus Priyanka would be a tantalising contest but will the Congress risk it? This is a million dollar question.