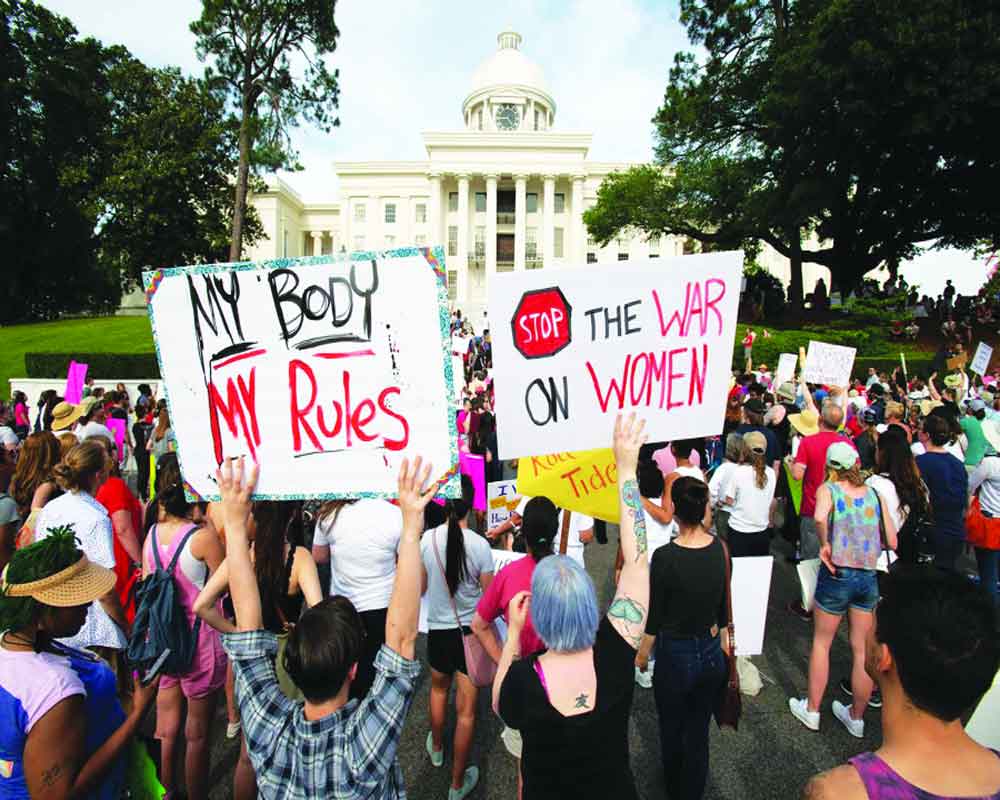 There’s a strong need to present counter-narratives to voices in the US calling for restricting access to safe abortion services. The discourse must be shaped keeping the woman and her alone at the centre

A group of people walking the red carpet at the Cannes film festival this year turned heads and made headlines — not for their peculiar outfits but for the green scarves they were waving. Repeating chants of “solidarity for women,” this bunch comprised campaigners. They were drawing attention to the urgent need being felt to preserve women’s reproductive rights.

This and similar protests have become even more critical in the face of an accelerated trend in many States in the US, advocating a ban on abortions. Since early this year, several provinces in America have proposed and successfully passed what they call a “Heartbeat Bill”, that restricts women’s access to safe abortion services.

While Mississippi signed a Bill to ban all abortions beyond five to six weeks, Georgia and Missouri passed Bills to ban abortions after six and eight weeks respectively. Most recently, Alabama passed a draconian Bill that bans nearly all abortions, including in cases of rape and incest, making it punishable for the providers by up to 99 years in prison.

In a country where abortion so far is legal, women’s rights have come under serious threat and would cease to exist if these Bills become laws. Such bans will have more profound ramifications for young women, and those from poor backgrounds. Their access to safe abortion services will be constrained due to their inability to travel to other States to seek abortion, with detrimental impacts on their health and rights.

These recent developments in the US’ policy environment on reproductive health and rights is a well-orchestrated, concerted move by the anti-choice groups to eventually overturn the Roe vs Wade judgement, which guarantees the right to abortion. The Supreme Court of the United States classified the right to choose to abort as a “fundamental right.” The judgement requires courts to evaluate challenged abortion laws under the “strict scrutiny” standard — the highest level of judicial review in America.

These amendments could set a wrong precedent for countries across the world reviewing their abortion laws, potentially restraining and reversing the progress made in women’s reproductive rights historically. It has been well documented that restrictive abortion laws can only have one consequence — increased unsafe abortions and maternal deaths. If a woman decides to get an abortion, she will get it no matter what. Whether it is through safe means or clandestine and unsafe methods, depends on its legality and accessibility. Banning abortion, contrary to common misconceptions, would not lead to a fall in abortion rates but more unsafe abortions and subsequently, higher maternal deaths.

As a result of the narrative shaping up in the US, supported by the global gag rule, one could expect reverberations in the delivery of safe abortion services across the world. The withdrawal of funds for the provision of abortion care, coupled with the counter-narratives creeping in have an impact on the attitudes of health systems and abortion providers, with an increased fear or reluctance among them to terminate pregnancies. The alternative can have a particularly dampening effect by way of confusing and hampering the efforts of organisations and providers, who have been working on safe abortions globally.

The language and positioning of the issue also have a vital influence in shaping discussions and debate across the abortion eco-system.

To cite an example, the emotive use of terms like “fetal heartbeat” rather than the clinical term “cardiac activity” is a deliberate attempt to imply personhood of the foetus and is a medical inaccuracy as the term “fetal heartbeat” is used in pregnancies beyond eight weeks.

A Missouri Republican State Representative used the term “consensual rape” when arguing in favour of a proposal that would ban abortions in the State after eight weeks of pregnancy — even in cases of incest or rape, though he apologised later. The abortion discourse must be shaped keeping the woman and her alone at the centre. It is a humiliation if in this day, women feel the need to fight for their rights to control their own bodies.

It is imperative to recognise and call out such an ultra-conservative and regressive mindset with complete disregard for women’s rights and health that is behind this concerted moment to curb abortion access and shield ourselves from the insidious consequences of the legal changes happening in the US.