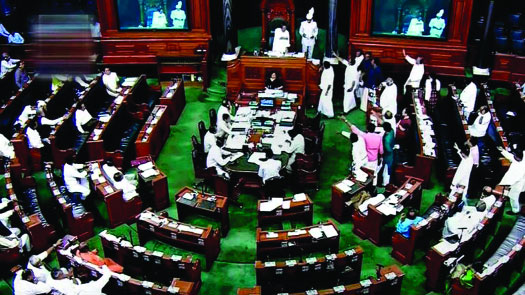 The new Bill has opened a Pandora’s box. Can the Opposition wrest the pre-poll narrative from the BJP yet?

Clearly, the Opposition has been stumped by the BJP’s googly in the form of the quota Bill for economically weaker classes, which is all set to become a key narrative of the Lok Sabha polls without the government having to do much but dangle another carrot instead. And a fat one at that. Touted as a revolutionary, caste-agnostic measure for the poor, the BJP did not do anything original really. It just borrowed something that the Opposition, including the Congress, could not venture into legislation-wise though keeping it part of their promises, and claimed it as its own. In the process, it also trapped parties which expressed the intent to deliver but in one masterstroke reduced their promise to empty rhetoric and left them with no option but to pass the Bill in the Rajya Sabha. Who wants to appear anti-poor when garibi hatao has been a banner campaign of eternal sunshine through the decades for all political parties concerned? Obviously, the Opposition can now count on the judiciary for stalling the quota on grounds that it breaches the 50 per cent reservation barrier set by the Supreme Court and that economic criteria alone don’t quite make the cut unless seen in totality with social histories. But the BJP clearly has nothing to lose as it has scored a much-needed legislative win and an implied benefit for its core upper caste votebase. Even the TDP of Andhra Pradesh and TRS of Telangana, despite being the only two parties in the country running special corporations for minority Brahmins for two years now, couldn’t make political capital out of their novel plan. Moreover, once they have supported the passage of the Bill in principle, what face would they have in criticising it? This is the dilemma that the Opposition is currently caught in. However, it is hoping that the cascading debate over particularities, the judicial intervention and the rather illogical and arbitrary assumptions in the Bill would give its leaders a chance at mounting counter-campaigns.

But can the quota Bill reap anything at all? The legislation undoubtedly has been hastily sewed up without proper debate and discussion for it to be effective. Even the Mandal Commission recommendations came after years of study and impact assessment. In this Bill, there is no empirical data collection or benchmarking of cutoffs, which makes it rather amorphous. Also there is no detailing on where and by how much would the quotas apply in higher educational institutions and jobs. The Opposition could draw up a charter demanding specifics and go to the people rather than calling it a mere jumla for the polls, considering the BJP had failed to create two crore jobs per year as promised in 2014. Though our economy can pull up a decent growth rate, job creation is still at its lowest with a manufacturing push hardly delivering the result. Also what of existing educational and job quotas that remain unfulfilled? Although the BJP has promised 180 Central institutes, including IIM and IITs, an additional 10 lakh seats for a higher student intake, would there be enough available talent to qualify given the meritorious nature of these institutions? Or would nobody talk about meritocracy anymore considering that almost 95 per cent of the population has been covered by the markers of the new bill and there’s no general category left whose hurt feelings need to be assuaged. Some parties like the Samajwadi Party are demanding proportional quotas with Ram Gopal Yadav insisting the category for OBCs be enhanced to 54 per cent, keeping in mind the increase in their population, since the government had decided to break the 50 per cent barrier any way. The BSP is asking why the NDA did not not introduce another amendment to introduce reservation in promotion, its long pending demand. Meanwhile the Trinamool Congress is questioning the Rs 8 lakh per year in the quota bill, saying it straightaway moves the poverty line to Rs 2,100 a day and makes the tax payer (anybody earning more than Rs 2.5 lakh per annum has to pay taxes) poor in a blunderous swathe of populism. Then the Rs 8 lakh cut-off is the same for OBCs and the creamy layer among them. This flat plane criteria means that the upper caste poor would easily be preferred. The real challenge for Opposition parties is to coalesce their points and expose the jumla the Bill can become rather than appear as clever nitpickers.