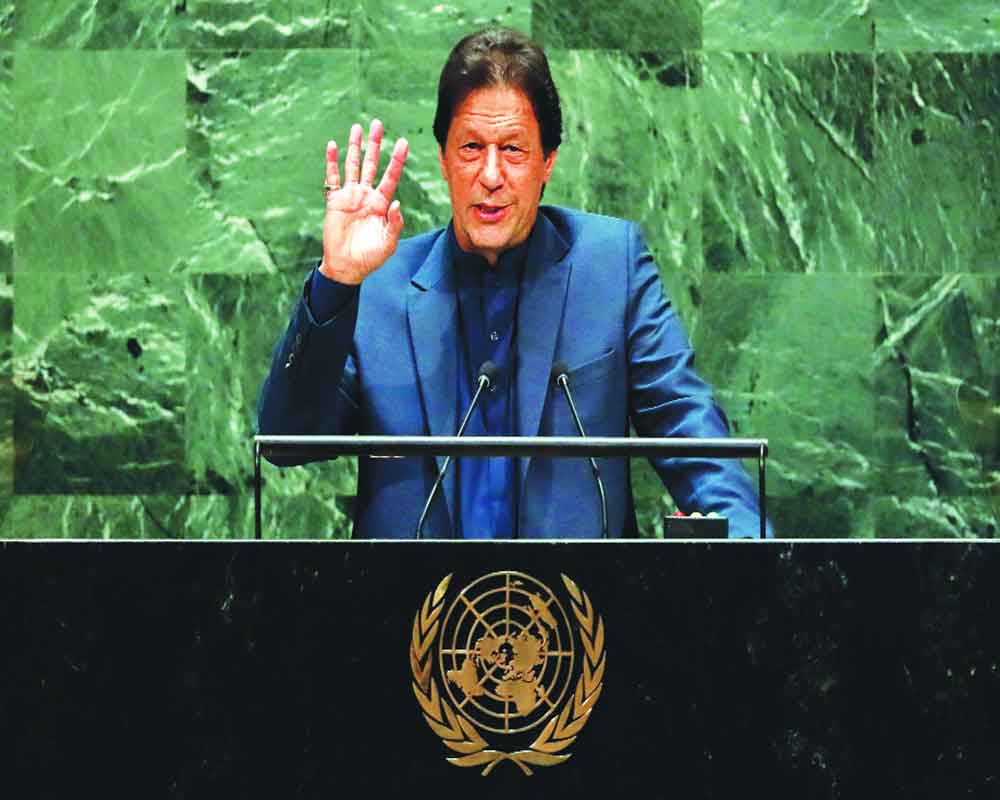 Pakistan Prime Minister Imran Khan’s impotent rage over the abrogation of the special status given to the former State of Jammu & Kashmir under Article 370 and his childish threats of a “blood bath” and “nuclear carnage” is not going to frighten anybody. India has heard such threats and abuses from the Pakistani leadership for many decades since Independence and has generally tended to ignore them as the fulminations of uncivilised individuals who have dominated politics in that country.

Khan lamented recently in his speech at the United Nations General Assembly (UNGA) and elsewhere in media interviews that the world was not taking cognizance of the abrogation of the special provisions because the “suffering people” in Kashmir were all Muslims. If those, who were locked down like this, were “Europeans, Christians, Jews or Americans and not Muslims”, the world would not have been silent.

Khan’s attempts to paint the Western world as being made up of Christian communalists, racists and sympathisers of the Jews is just not going to wash because Europe has opened its arms to lakhs of impoverished Muslims, who are escaping from Africa and Arabia and risking their lives on the high seas to reach sanity and hope. Second, unlike in the past when confused Nehruvians ruled the roost in New Delhi, it appears as if the Narendra Modi Government has succeeded in explaining the Kashmir issue to the world. Other nations now know that the former State of Jammu & Kashmir acceded to India just the way the other 563 princely States did in 1947 and, thus, became an integral part of the country. Although the Kashmir Valley was a Muslim-majority area, demographics in other parts of the State were different. In any case, India had rejected the two-nation theory and, therefore, agreed to the accession of this State. Pakistan, however, was disappointed and sent its troops to capture certain parts of the State, which are now called Pak-Occupied Kashmir (POK). India wants vacation of those territories by Pakistan. In light of these facts, other nations are wondering what all the fuss is about. This is purely India’s internal matter also because the Constitution empowers the federal Government to alter the status and boundaries of the States.

Finally, Khan belongs to a country that has no respect for secular traditions and has, in fact, specialised in ethnic cleansing. On August 14, 1947, the day Pakistan was born, Hindus constituted about 25 per cent of its population. Over the last seven decades, the Hindus are reduced to just 1.64 per cent. They were either converted to Islam or killed. Similarly, the population of Christians and other minorities like the Ahmedias have been reduced to a miniscule minority. In all, they constitute just about three per cent of that nation’s population. For how long can Pakistan hide these facts? As against Pakistan’s dismal record, India had 35 million Muslims on August 15, 1947. Their numbers have now swelled to 175 million.

The Preamble to the Pakistan Constitution says: “Wherein the principles of democracy, freedom, equality, tolerance and social justice as enunciated by Islam shall be fully observed.” Article 2 states that “Islam shall be the State religion of Pakistan.” Article 41(2) deals with the office of President and says, “A person shall not be qualified for election as President unless he is a Muslim and not less than forty-five years of age…”

The Third Schedule lists out the oaths to be administered for those entering various offices. The oath to be taken by an incumbent Prime minister says, “In the name of Allah, the most beneficent, the most merciful, I...do solemnly swear that I am a Muslim and believe in unity and oneness of Almighty Allah…”

Having hounded out religious minorities in this manner since its inception, Pakistan wants the world to believe that the Muslim minority is being persecuted in India. That is why nobody believes Khan.

There is yet another reason why the Pakistan Prime Minister’s arguments will not wash. The former State of Jammu & Kashmir comprised of three distinct areas — the Muslim-dominated Kashmir Valley, the Buddhist-dominated Ladakh region and the Hindu-majority Jammu region. While Muslims live and thrive in all the three regions of this former State, over four lakh Hindus, who lived in the Valley — the Kashmiri Pandits — were hounded out 30 years ago and the Muslim majority and its political leadership did nothing to stop this exodus.

Terrorists were let loose on this religious minority and as bloody attacks mounted, the Kashmiri Pandits fled the Valley and took refuge in Jammu, Delhi and other areas. Also, since the Valley Muslims dominated the politics of the erstwhile State, the people of Ladakh felt persecuted and alienated and were demanding independence from the former State. They had been pleading for autonomy for decades. The recent decision of the Union  Government to turn Ladakh into a Union Territory has been wholeheartedly welcomed by the people of that region.

The Hindus of Jammu were also feeling alienated because of the unfair approach of the politicians of the Valley and their unwillingness to give the people of Jammu a proper share of power. Pakistan is largely responsible for vitiating the secular, democratic credentials of the Valley people over the years.

This is the fallout of the two-nation theory that Mohammed Ali Jinnah propounded to divide India and establish a separate Muslim nation. That is why when Khan talks of Kashmir, he just speaks about the Muslims in Kashmir. He has no concern for people of other denominations. Prime Minister Modi, on the other hand, kept the focus on the big issue — terrorism — during his UNGA address. His call for global unity against terrorism, therefore, had greater resonance.

In light of all this, one wonders how any Pakistani can raise his/her voice and become flag-bearers of democracy and secularism. In any case, this time around, India has succeeded in alerting the world to Pakistan’s divisive agenda and consequently ensured that other nations do not fall into its trap once again.