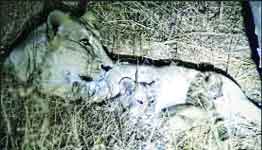 A feel-good image of a lioness nursing and feeding a two-month-old leopard cub, who got separated from its mother, along with her two new-borns in Gir made for a touching act of compassion, showcasing the maternal and protective instincts of the animal world and restoring our faith in the laws of the natural world to take care of itself.

The lioness has been protecting the cub for six days now, feeding it with milk and taking care of it as that of her own cubs who are three-month-olds. While friendly interactions between species are relatively common, the uniqueness of this alliance lies in the fact that the adoption happened between two felines who are believed to be enemies. Lions and

leopards are not exactly friends and stay away from each other. In fact, the pride of the lion, as it is known, lies in it being a predator — killing any animal, including the leopards — to eliminate any future competition for food or to ensure that their own progeny survives to adulthood. Social as they are by nature, the pride of their grouping, that can range from a collation of two or more than 20 male or female related species, lies in protecting their territory and offspring. Their relationship is such that they can recognise any of their kind by sight or roar. So resilient they are that they can distinguish their cubs from others, which once in the king’s sight, is most likely to be killed. Females, on the other hand, remain close to each other to do the most gruelling task: To give birth and nurse their cubs communally. It is this psychology primed in their minds, to take care of baby cats, that helped the baby leopard find a shelter among the lioness’ own cubs. Physically, the cubs can hardly be distinguished. The lioness has also been taking care to ensure that the big alpha males do not prey on the cub as is their given behaviour. Though cats are not offensive when their prey base is not an issue, constricted and broken forest corridors and human depredations have resulted in changes in their behaviour. Which is why the lioness’ act stands out in a hostile wildlife climate.

A similar pairing was also witnessed in Tanzania two years back when a five-year-old lioness, who had lost her own cubs, was seen nursing a week-old leopard cub. Further, the King of the Jungle may not be the only ones to form odd alliances. Similar has been the story between a dog nursing a squirrel and that of a deformed dolphin being welcomed into the whale family. The lion-leopard story also offers lessons in humanity, especially in times when we are increasingly witnessing human-wildlife conflict that has resulted in the disappearance of these rare species. We, being humans, must also be empathetic towards protecting wild creatures. There can be no better a legacy as remarkable as that of inter-species coordination in protecting creation.