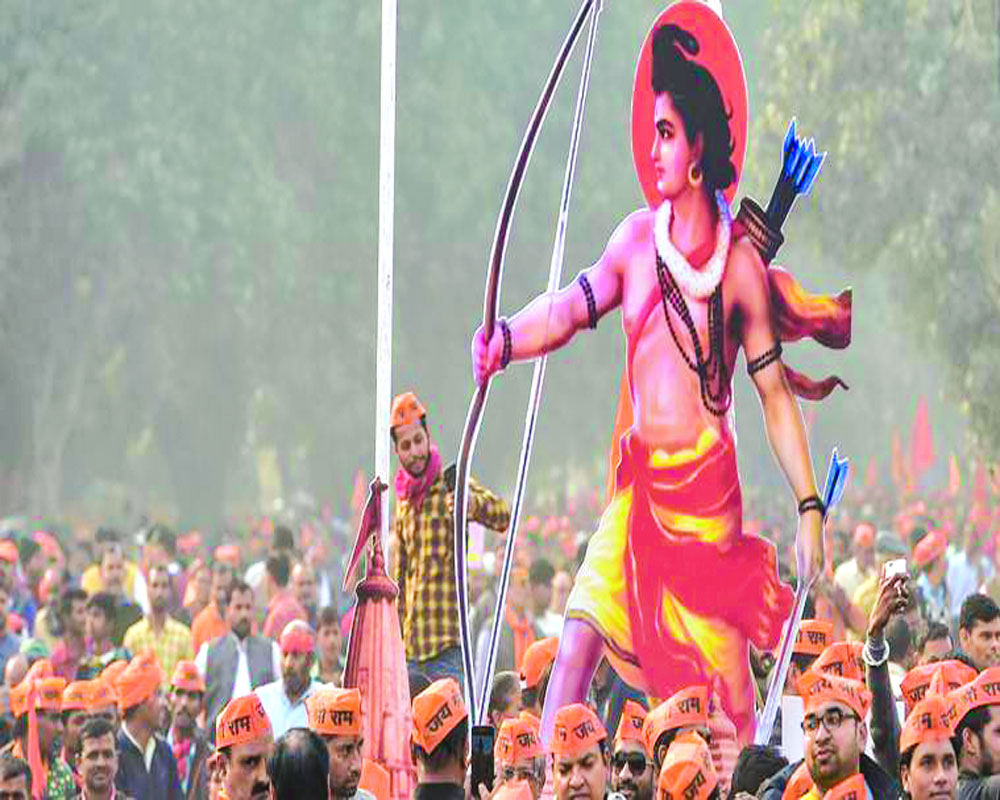 The lack of will has allowed a non-disputed issue like the Ram Janmabhoomi to acquire such dimensions. It’s high time we get over old complexes and act as free citizens

Many an onlooker would be laughing at the manner in which India has dealt with the Ram Janmabhoomi issue. Until 1947, it was understandable that the Hindus held no trumpcard to win at Ayodhya, but why the lackadaisical handling of the issue thereafter? In 1949, the local court allowed the mahants to place the idol of Rama on the chabutara so that the worshippers would have access to the deity. That was sufficient to delight most devotees until 1983 when the Vishwa Hindu Parishad (VHP) appealed to every village to send a brick or Rama shila to Ayodhya. This was symbolic of their desire to build a Rama temple. Other members of the Sangh parivar kept aloof until 1989, when the Bharatiya Janata Party (BJP) included the temple in its manifesto. On December 6, 1992, the demolition of the Babri edifice took place. A fortnight later, the BJP distanced itself from the demolition. Thereafter, the All India Muslim Personal Law Board claimed ownership of the land and dragged the dispute to court and still after 27 years, it remains unresolved. This despite the Archaeological Survey of India testifying that there was a stone temple below which the Babri structure had stood.

This writer’s associates overseas are amazed at the lack of will which allows everybody to make a mockery of a non-dispute. Experts have identified about 3,000 temples, which over the centuries, were either converted or recycled into mosques. Hardly a single place of worship has been restored to the Hindus despite seven decades of our Independence. On the contrary, over 100 temples have been desecrated in Kashmir over these seven decades. It is distinctly possible that easy conquest, again and again over centuries, introduced a sadistic habit into the psyche of the conquerors, who then perpetrated a variety of crimes and cruelties on the conquered. They acquired an inclination to obtain pleasure out of inflicting pain on others. Nearly seven centuries of the invaders’ rule may have reduced the vanquished to acquire a slave mentality. Such a state of mind could well have affected the conquered people in the absence of any alternative source of political pressure.

To obtain pleasure by being subjected to pain has been classified by psychologists as “masochism.” This is a psycho-sexual disorder in which erotic release is achieved through having pain inflicted on oneself. The term derives from the name of Chevalier Leopold von Sacher-Masoch, an Austrian, who wrote extensively about the satisfaction he gained by being beaten and subjugated. The amount of pain involved can vary from ritual humiliation with little violence to severe whipping or beating. While pain may cause a certain amount of excitement in many people, for the masochist, it becomes the chief end of activity. The term is frequently used in a looser social context in which masochism is defined as the behaviour of one, who seeks out and enjoys situations of humiliation or abuse. More commonly, the association of pain with sexual pleasure takes the form of both masochism and sadism, the latter obtaining sexual pleasure through inflicting pain on others. Often, an individual will alternate roles, becoming aroused through the experience of pain in one instance and through the infliction of pain in another. Perhaps, this explains why we have yielded ground so easily.

Ever since Professor Max Mueller, German philosopher, delivered his lecture in Westminster Abbey, London, in 1873, the six great religions of the world have been broadly classified into two categories. Missionary religions: Buddhism, Christianity and Islam; and non-missionary religions: Hinduism, Zoroastrianism and Judaism. In the case of the missionary religions, it is a sacred duty cast on the followers to spread faith among the non-believers until, as it were, it is accepted by all members of the human family. It is only in the case of Islam that its followers have resorted to forcible means to convert non-believers.

For example, Professor Sir Thomas Arnold, who was the principal of Muhammadan Anglo-Oriental College, Aligarh, Uttar Pradesh in the 19th century, recorded the following: “India is a country where Islam owes its existence and continuance in existence to the settlement of foreign conquering Muhammadan races, who have transmitted their faith to their descendants and only succeeded in spreading it beyond their own circle by means of persecution and forced conversions.”

Ever since Islam was born in Arabia, it came into conflict with Judaism and Christianity. The clash mainly occurred because of the common characteristics of the two faiths rather than the differences. One book of faith; one leader; one religion and, in the latter, a similar missionary zeal. Professor Bernard Lewis, the eminent American scholar, observed: “The see-saw attack and counter-attack between Christianity and Islam had begun with the crusades and they ended with a conclusive Christian defeat.” Besides, for almost a 1,000 years, from the first Moorish landing in Spain to the second Turkish siege of Vienna, 1682, Europe was under constant threat from Islam. In the early centuries, it was a double threat not only of invasion and conquest but also of conversion. Having conquered large parts of southern Europe, Muslims imposed their Sharia on Christians.

For a millennium, from the Arab invasion of Sind in 712 AD till the death of Aurangzeb in 1707, Hindu society was equally under the threat of conversion and conquest. This happened because after the death of Harsh Vardhana in 647 AD, Hindu rulers of north India generally embraced one idea: Self-aggrandisement, which spelt but only ruin.

It is well-known that Mahmud Ghazni had led several expeditions into India but Hindus seemed to think that history teaches but one lesson, namely, there are no lessons to be learnt from history. Alberuni, the distinguished astronomer, who had accompanied Mahmud, wrote that Anand Pala, after his own defeat at the hands of Mahmud, wrote to him. “I learn the Turks have rebelled against you. If you wish, I shall come to you or send my son with 500 horses, 1,000 soldiers and 100 elephants. I have been conquered by you and, therefore, wish that another man should not conquer you.” Such examples of Hindu mindset abound. In this context, an eminent Indian historian said, “The people en masse seldom act except as they are led. Given effective leadership, they are capable of achieving almost anything.”

Prime Minister Jawaharlal Nehru had invited the distinguished historian, Sir Arnold Toynbee, to deliver the Maulana Abul Kalam Azad memorial lectures. In the course of them, he expressed surprise that two prominent mosques stood on the bank of the Ganges at Benaras so many years after Independence.

He went on to quote the example of Warsaw, whose biggest church had been converted from Catholic to an Eastern Orthodox place of worship when the Russians conquered

Poland. When, however, a century later, the Poles were able to free themselves, they demolished the Russian church. They promptly replaced it with a Roman Catholic edifice of worship. That is what Sir Arnold expected of Indians too. Indeed, it is high time, Hindus got over their old complexes and became self-confident free citizens.