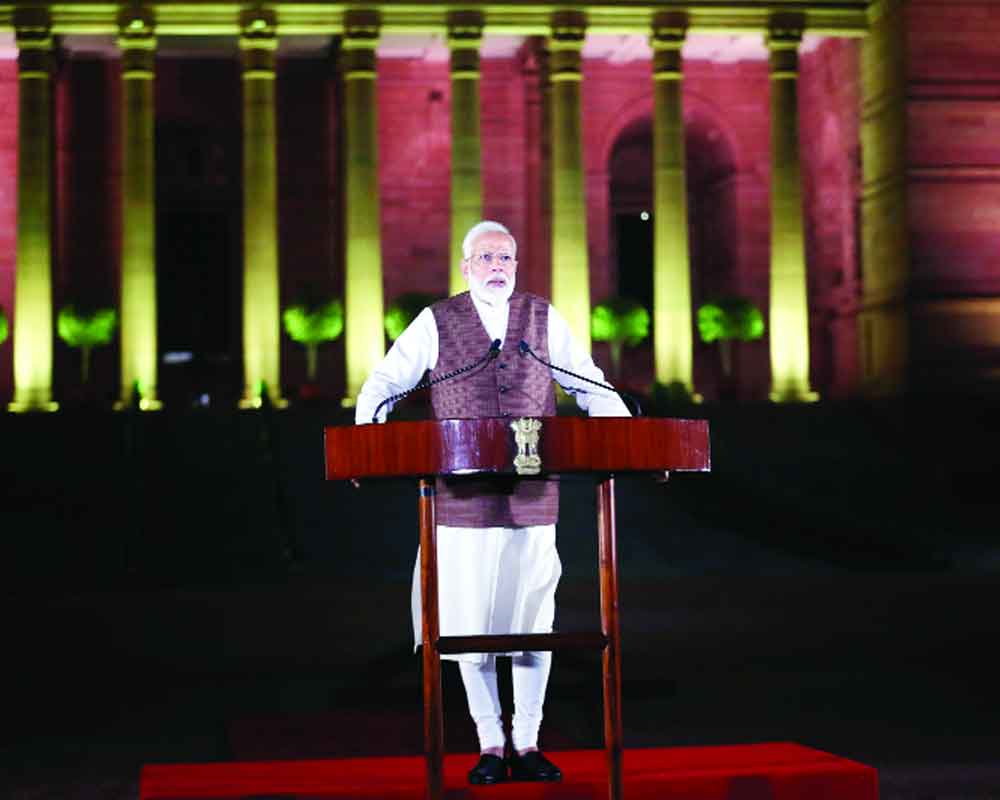 Modi’s victory marks a tectonic shift in the history of the republic. He may have seemed presidential but the spirit was republican

Prime Minister Narendra Modi is accused of making the 2019 general election a presidential race centred on his formidable personality and powerful oratory, thus ensuring the landslide victory of the Bharatiya Janata Party (BJP) 303; NDA 353. However, his principal challenger, Congress chief Rahul Gandhi, made the contest monarchical with his family-driven rhetoric and entitlement brigade — scions of political families close to the Nehru-Gandhis, who owe their eminence to proximity. Rahul Gandhi’s closest colleague is sister, Priyanka Vadra, and his political advisors and mentors (Digvijay Singh, Sam Pitroda) are also inherited.

The Congress was hobbled by this baggage. In an age of soaring aspirations and quest for equality, it was clueless how to appeal to rural or urban voters, women, youth, farmers, traders, entrepreneurs and professionals among others. Decision-making within the party has shrunk to closed door meetings with unknown membership and little regular communication with the rank and file. In contrast, BJP president Amit Shah kept the party on its toes round the year and gave tasks to every booth worker.

The more disturbing news for Congress is that it has been reduced to a fringe party, with a decent presence only in Punjab and Kerala. It drew a blank in Arunachal Pradesh, Andhra Pradesh, Delhi, Gujarat, Haryana, Himachal Pradesh, Jammu and Kashmir, Manipur, Mizoram, Nagaland, Odisha, Rajasthan, Sikkim, Tripura, Uttarakhand, Daman Diu, Dadra Nagar Haveli, Lakshadweep, Andaman & Nicobar Islands and Chandigarh. A comeback would take a miracle. Meanwhile, the BJP vote share rose to over 50 per cent in several States.

The Left collapsed with the Congress, given its deep symbiotic relationship. The Leftist stranglehold over the media got huge coverage for Kanhaiya Kumar (CPI, Begusarai, Bihar), who was trounced. But public fatigue with the Left’s shrill and negative rhetoric caused its fall from 59 seats in 2004, 26 in 2009, 10 in 2014 and five in 2019; recovery is unlikely.

Modi’s success lay in shifting the electoral template away from the Nehruvian paradigm of default Muslim vote bank plus sprinkling of castes to fill the electoral kitty towards more inclusive voter participation. The process began in 2014 but was largely ignored by analysts. Fine-tuned and implemented with greater vigour in 2019, it is being maligned as the rise of “majoritarianism.” Western newspapers and their Indian echo chambers are warning of danger to minority groups. Yet none of these eminences ever criticised minority religious leaders, who asked their flocks not to vote for the BJP, thus tampering with the free will of voters and perverting the democratic system.

Simply put, Modi has removed the minority veto in the polity, a Nehruvian aberration that denied equality to the myriad groups comprising the non-monolithic Hindu community. Henceforth, minorities, like others, must vote as individuals on the issues of the day – nationalism, terrorism, farmer distress, budget and employment among others. The ancien régime, which pressured citizens to “vote your caste/community”, while lampooning them for doing so, has made way for “vote your nation/issue”. This caused the rout of the Samajwadi Party despite its pact with the Bahujan Samaj Party in Uttar Pradesh. The Congress won only Sonia Gandhi’s seat, which means Priyanka Vadra (who failed to retain Amethi) may not win Rae Bareli if Sonia Gandhi vacates it.

With hindsight, it seems amusing that Sonia Gandhi, Sharad Pawar and Telugu Desam Party’s Chandrababu Naidu were so oblivious of the simmering Modi wave that they proposed a grand Opposition alliance in the event of BJP-NDA failing to win a clear majority and even wanted the President to call the post-post alliance before the pre-poll pact. They cast aspersions on the integrity of the Electronic Voting Machines (EVM) even after dodging a previous challenge by the Election Commission to publicly demonstrate that the machines could be hacked. Sadly, former President Pranab Mukherjee joined this chorus and blotted his copybook.

The truth is that EVMs cannot be tampered without physically handling each machine (which is impossible). Each machine is an independent recording device with no internet connection and cannot be hacked via internet/Wi-Fi. The VVPAT trail found no discrepancies. Anyway, Chandrababu Naidu vanished after the TDP’s rout; Trinamool Congress chief Mamata Banerjee was chastened. At its working committee meeting, the Congress agreed not to question the EVMs.

In Jammu and Kashmir, the National Conference won Anantnag (Hasnain Masoodi), Baramulla (Akbar Lone) and Srinagar (Farooq Abdullah) and the BJP won Jammu (Jugal Kishore), Udhampur (Jitendra Singh) and Ladakh (J.T. Namgyal). The People’s Democratic Party’s rout is a message to the BJP to fulfill its promise to abolish Articles 370 and 35-A, which only needs a Presidential order and political will. In Assembly elections later this year, if a coalition is necessary, the BJP must cut a deal equal to that crafted by the Congress when it gave the Chief Minister’s post to Omar Abdullah. In Delhi Assembly elections, the BJP must field leaders with an electoral base and shun paratroopers who ruined the party in 2015.

Modi has promised cooperation to the new Governments of Odisha, Sikkim, Andhra Pradesh and Arunachal Pradesh; they will naturally reciprocate in Parliament. For India as a whole, some urgent priorities include updating the National Register of Citizens, passing the Citizenship Amendment Bill to protect Hindus fleeing persecution or instability in the neighbourhood, giving equal rights to Hindu refugees languishing in Jammu and Kashmir and scrapping the discriminatory Right to Education Act or applying its provisions equally.

Above all, Modi must give priority to the economy by securing investments and increasing the pace of infrastructure development. Agriculture needs a rethink outside the discredited paradigm of costly fertilisers, pesticides and depleted water tables. The growing health consciousness in society will make organic farming feasible and remunerative.

Modi’s victory marks a tectonic shift in the history of the republic. Unlike Rahul Gandhi, who embodied elected monarchy and had little to offer the citizen, Modi wove city and chaupal together in a grand narrative of nationalism, national resurgence and regeneration. He may have seemed presidential but the spirit was republican.