Return of a friend

Return of a friend 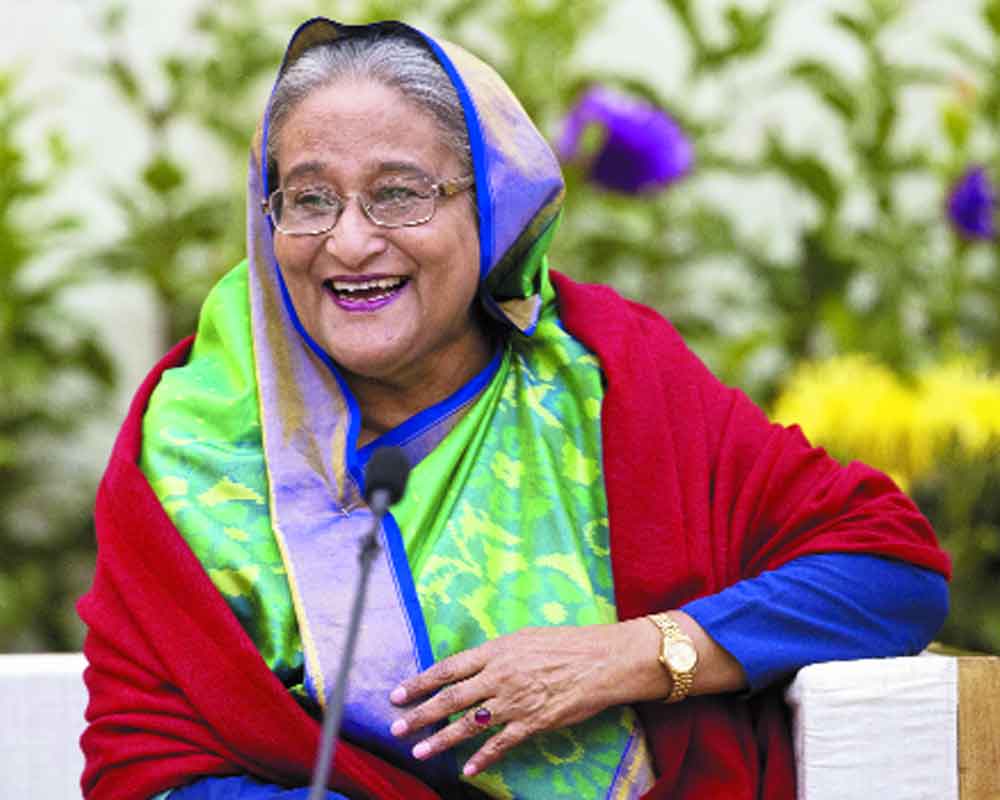 India has every reason to be happy over the Awami League’s overwhelming victory in Bangladesh’s recent parliamentary elections. Sheikh Hasina has been a steadfast friend. She has unfailingly recognised India’s critical contribution to Bangladesh’s liberation in 1971 and honoured Indians for it. Her Government posthumously conferred the Bangladesh Freedom Honour to Prime Minister Indira Gandhi for “her contribution to Bangladesh’s Liberation War” which “will be remembered for ever.” She has been the only recipient of the honour which is the highest state award for any foreigner. Former Presidents Pranab Mukherjee and Fakhruddin Ali Ahmed, former Prime Ministers, Atal Bihari Vajpayee and IK Gujral, and former Union Home Minister and twice acting Prime Minister, Gulzarilal Nanda, have been among the Indian recipients of the Bangladesh Liberation War Honour given to former Heads of State or Government or people who have held key Government offices.

Besides, Sheikh Hasina honoured the families of seven martyrs of the Indian armed forces in the 1971 war during her visit to India in April 2017; the families of 12 more were honoured by the Bangladesh Government in Kolkata on December 16 — celebrated every year as Vijay Divas (Victory Day) — 2018. More honour and recognitions are on the cards.

The Bangladesh Government under Sheikh Hasina has institutionalised the grant of awards with a committee headed by a well-known historian, Professor Muntassir Mamoon of Dhaka University, which selects the recipients after meticulously examining each case. There are also individual efforts. For example, Lt-Col (Retd) Quazi Sajjad Zahir, Bir Protik, founder and executive director of Shudhui Muktijuddhao (only the Liberation War), has a project for writing about the martyrdom of every Indian soldier. He tries to locate and keep in touch with their families and ensure that they are honoured by the Bangladesh Government. Simultaneously, he documents the roles of Liberation War fighters, experiences of civilians and investigates war crimes of Pakistanis and their Bangladeshi collaborators.

In sharp contrast, the military dictatorships headed by Generals Zia-ur Rahman and HM Ershad and the civilian Governments led by Begum Khaleda Zia as Prime Minister, were intensely anti-India and pro-Pakistan, and had tried strenuously to minimise — if not totally ignore — India’s contribution to the Liberation War. They had, besides allowing several secessionist insurgent groups of north-eastern India to establish camps in Bangladesh, helped them with funds, arms and training. Sheikh Hasina has destroyed these camps and handed over to India several notorious and wanted ULFA leaders.

A striking example of the bitterly anti-India sentiment of the BNP-Jamaat coalition Government, that ruled Bangladesh from 2001 to 2006 with Begum Zia as Prime Minister, was provided by the then Foreign Minister, Morshed Khan’s outburst against this country while inaugurating the ‘India-Bangladesh Dialogue of Young Journalists’ at Dhaka on September 7, 2004. Debunking India’s claim that North-East Indian insurgents had 195 camps in Bangladesh, he had said, “The list of insurgent camps from their side increases at every meeting between us. But they have not been able to provide a single telephone number or address of these camps.” Threatening India, he had said in the same speech that though Bangladesh was “India-locked”, Delhi had “also to remember that its North-Eastern States” were “Bangladesh-locked.”

Further, reflecting the Khaleda Zia-led Government’s policy of fomenting discontent and secessionism in India, he had said, “It costs 40 per cent more for North-Eastern India’s States to buy most construction goods from Kolkata or other western cities than it would have cost them to buy those from Bangladesh.” He also blasted the “Central Bank of India” (the Reserve Bank of India?) for acting unilaterally against the interests of the common people of North-Eastern States by imposing non-tariff barriers such as not allowing individual States to open Letters of Credit without Delhi’s permission.

The BNP-Jamaat Government also tried to blame India for the dastardly grenade attack on an Awami League’s rally in Dhaka on August 21, 2004, addressed by Sheikh Hasina, then president, Awami League, and the leader of the Opposition in Bangladesh’s Jatiya Sansad or National Parliament, and attended by all important leaders of the party. In the final count, the attack, a cold-blooded slaughter, killed 24 people and wounded over 300. The aim was to hobble the Awami League by wiping out its top leadership. Sheikh Hasina had a close shave but her hearing was impaired.

Facing sharp criticism at home and abroad, the BNP-Jamaat Government ordered an inquiry. Joinul Abedin, a former High Court judge and BNP leader, was appointed to head it without any consultation with the Opposition. His report was never made public. He, however, said at a Press briefing just before submitting it that neither the BNP nor the Awami League nor Jamaat, nor any other fundamentalist Islamist organisation, was responsible for the attack; agents of a foreign country were. Abedin did not identify any country or its agents but suggested, through innuendoes and false associations, that it was India.

Subsequent investigations concluded that the terrorist organisation Harkat-ul-Jihad-al-Islami (HUJI) Bangladesh had carried out the attack, which, according to the chief prosecutor in the case that followed, was orchestrated by Pakistan’s Inter-Services Intelligence (ISI) Directorate and the BNP-Jamaat coalition Government, which used the Bangladesh’s Ministry of Home Affairs, Directorate-General of Forces’ Intelligence (DGFI), National Security Intelligence (NSI) and the Bangladesh Police, to implement the plot.

The BNP-Jamaat alliance was routed in the parliamentary elections of 2008, in which Awami League and its allies won 263 out of the 300 directly-elected seats. Sheikh Hasina could not fully implement her secular and democratic agenda and bring to justice the war criminals and collaborators, who had perpetrated the most horrific atrocities, during her first tenure as Prime Minister from 1991 to 1996; she lacked adequate parliamentary majority and was hamstrung by the administration which was heavily staffed by BNP and Jamaat supporters.

She could not only do so post-2008 elections and bring war criminals to belated justice but also take strong action against fundamentalist Islamist terrorist organisations in Bangladesh and fulfill her promise of not allowing her country’s territory to be used for terrorist strikes against any other country. India-Bangladesh relations have soared and economic, strategic and security-related ties between the two countries have become deeper since then. Bipartite agreements have led to cooperation in a number of areas like security, trade, connectivity, energy, defence, civil nuclear agreement and bus and train services. Mutual ties are now set to become even more fruitful.