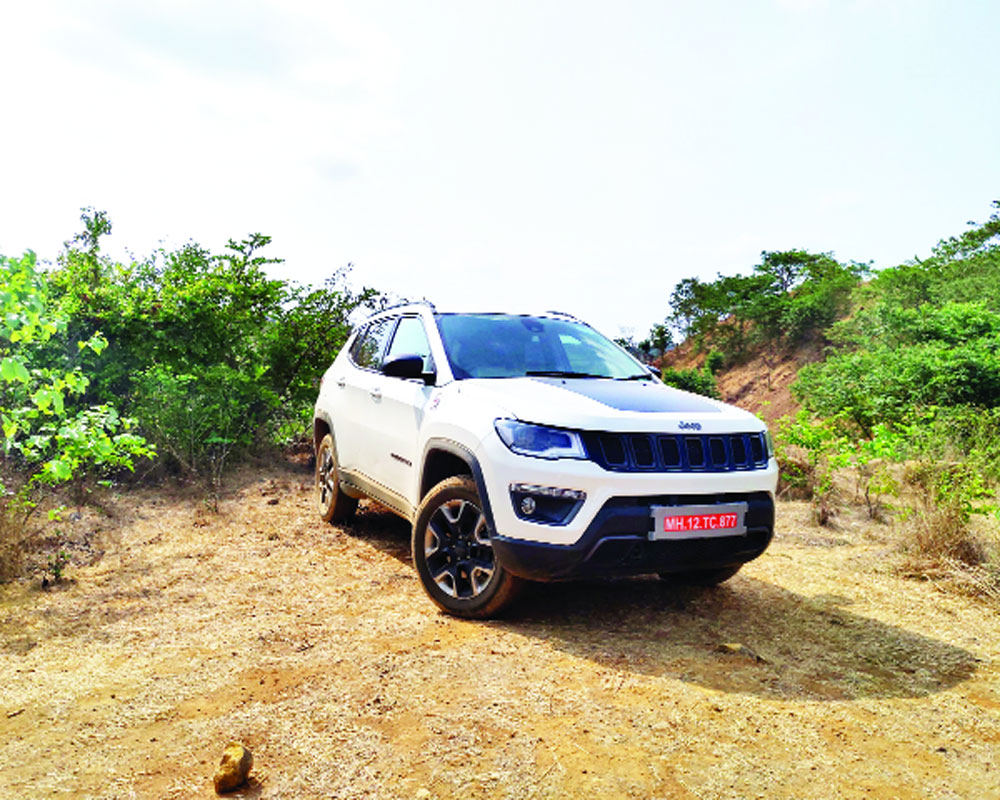 The new Jeep Compass Trailhawk is ‘Trail Rated’ by Jeep. What does that mean? Well, we climbed up and down some hills in the Sahyadris to find out

In the two years since the Jeep Compass has been launched, Fiat-Chrysler Automobiles (FCA) has sold close to 35,000 of them, coupled with the close to 20,000 units it has exported to right-hand drive markets across the world, the Compass can be judged a relative success. It is undoubtedly a success when it comes to a global product being manufactured in India and should be a showcase for the government’s ‘Make In India’ programme. That said, sales for the Compass have tapered off slightly over the past few months with other manufacturers upping their game. But one thing was never in doubt, the Compass was always the best off-road performer in its class, especially if you got the full-fledged 4x4 variant. But now, FCA India has made it even better, with the introduction of the Jeep Compass Trailhawk.

The ‘Trailhawk’ and ‘Trail rated’ badges that this new variant of the Compass gets, marks it out as special. Jeep has launched possibly the most capable off-roader available in India today and if you are someone who likes getting down and dirty, climbing over mountains, fording rivers and making your way through slush, the Compass Trailhawk is an incredibly capable car with some special modifications to the suspension and the addition of a low-ratio four-wheel drive gearbox, several bodywork changes that have improved approach and departure angles, a raised ground clearance which also improves water wading capabilities. The surface mode selector also gets a new ‘Rock’ mode that can be engaged in four-wheel low-ratio that makes the Trailhawk’s computer brain know how to react to low grip situations.

Those are not the only changes to the car, the two-litre turbodiesel engine on the Trailhawk now meets Bharat Stage 6 emission norms and has been slightly re-tuned. More important, the Trailhawk now comes with a nine-speed automatic gearbox, the first diesel automatic on the Compass range. You also get a bigger touchscreen inside, along with some trim items to mark the car out. Unfortunately, the Trailhawk does lose some features from the Limited Plus specification of the Compass as it will have a slightly higher price-point thanks to the BS6 engine and automatic gearbox.

This is a car made for off-road enthusiasts and it is extremely capable. Jeep does not give out the ‘Trail rated’ badge easily, cars have to prove their abilities on rough trails, everything from their maneuverability, wheel articulation, climbing and descent abilities. And in the Sahyadri hills between Mumbai and Pune, I found out that the Compass Trailhawk deserves those badges. In a course designed by Jeep Jamboree, an off-road enthusiast group in the United States that works with Jeep vehicles, you discovered the great climbing powers of the car and the fact that it could deal with mud, sand, rocks and some water.

Towards the end of the drive, we had to go down a very steep incline, which at the middle was over 60 degrees. Approaching the crest, you could not see down, just noticing the black matte glare protector on the bonnet. This is not something you would do in most SUV’s and the fact that I was doing this with Hill Descent Control switched off, where the car handles the braking itself on a steep incline was a bit crazy but rising the brake pedal and the wheels almost locked, it went down without much of a complaint, thankfully the track was slightly rutted but there was no point of time that I felt that I would lose control. When you know a car like Trailhawk, which is so capable, you begin to trust it immensely.

But the Trailhawk, frankly, is only something for the greatest of enthusiasts. The regular Compass four-wheel drive is more than capable enough for some soft off-roading, even though it lacks a low-ratio gearbox and automatic transmission. That said, if you believe that you want to go serious off-roading, the Trailhawk can literally go almost anywhere and keep you in relative comfort. There are several enthusiast groups across the country such as Terrain Tigers in the NCR, where you can learn the ins and outs of it.

This is a fun car and the experience on rocky roads was one that I will not forget. But the question that you have to ask when looking at a car like the Trailhawk is whether you need so much ability?