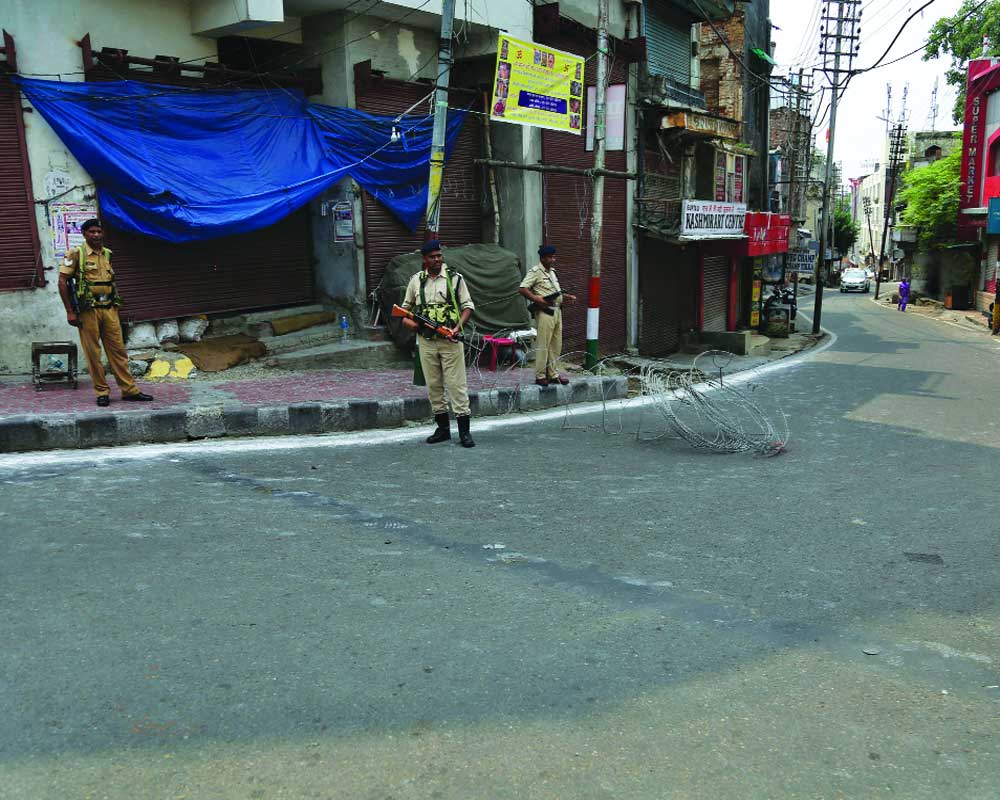 With Article 370 being revoked, the writing on the wall is clear: The Government is discarding old guard in the State and building a new leadership at the grassroot level

Think Kashmir without the families of Raja Hari Singh, Sheikh Abdullah, Mufti Mohammad Sayeed in today’s context and delete Jawaharlal Nehru and MA Jinnah’s personal love for the place; surely, the political landscape of the State would have been completely different.  It is axiomatic that Jammu & Kashmir became independent as soon as it was released from its allegiance to the British crown under the Indian Independence Act. The Maharaja of Jammu & Kashmir became the repository of all power under this Act, which created the two dominions of India and Pakistan. He was free to decide whether he would accede to any one of the two dominions.

Meanwhile, Jinnah visualised Kashmir as part of Pakistan and dreamt of bracing its climate and Mughal Gardens as the Governor-General of Pakistan. He thought it was almost in his pocket: Whether it came to him willingly or was taken by force was immaterial. The British had promised it to him: It was a majority Muslim area and it had no approach to India except through Pakistan. Being sure of his ground, Jinnah first made an approach to the Maharaja for accession of the State to Pakistan in a very persuasive and friendly manner. In fact, he lured the then Prime Minister of Kashmir, Ram Chandra Kak, to bring Kashmir to Pakistan. But the Maharaja remained firm on the ground that either the State would enjoy independent status or it would emerge with the Indian dominion.

As far as India was concerned, it was indifferent on the subject, though it would have been happy if Kashmir had acceded to India. Mahatma Gandhi visited Kashmir before August 15, 1947, to persuade the Maharaja to accede to India but he remained non-committal. If the Maharaja had decided to accede to India or to Pakistan before August 15, 1947, much of the trouble and bitterness may well have been avoided. But he was toying with the idea of independence and was relying on his Dogra forces to achieve this end. However, he was completely averse to the idea of acceding to Pakistan as it would have involved the complete destruction of the Hindu population of the State and seizure of all that they had, including abduction of women. Meanwhile, Sheikh Abdullah along with his deputy, Bakshi, took over the leadership of the National Conference (NC) as it was the only political party of the State. NC leaders were favorable to the State’s accession to India. The Maharaja felt that there was no option for him but to accede to India. However, India continued maintaining an indifferent approach towards Kashmir. Mahatma Gandhi and Sardar Patel preferred the situation where Kashmir accession must come voluntarily to India. Being a liberal democrat, Pandit Nehru was keen on the Maharaja handing over the power to Sheikh Abdullah than about accession. In his view, once the State administration had gone to popular hands, the question of accession could be appropriately discussed with the popular Government.

The biggest hurdle to resolving the Kashmir issue has been the business of “plebiscite”, which Pakistan as well as other India-baiters, including the so-called liberals, has often raised. The origin of that apprehension can be traced to the letter of October 27, 1947, which Lord Mountbatten wrote to Maharaja Hari Singh after the latter had signed his acceptance on the Instrument of Accession on October 26, 1947. That letter of Mountbatten was personal and it was in reply to the Maharaja’s letter of October 26, stating that “'a grave emergency” had arisen in his State and acknowledging that the Indian dominion “cannot send the help asked for” without his State acceding to India. Accordingly, on October 26, the Maharaja attached the Instrument of Accession for acceptance. In his letter, Mountbatten wrote, “...my Government has decided to accept the accession of Kashmir State to the dominion of India. In consistence with their policy that in the case of any State, where the issue of accession has been the subject of dispute, the question of accession should be decided in accordance with the wishes of the people of the State. It is my Government’s wish that as soon as law and order have been restored in Kashmir and its soil cleared of the invader, the question of the State’s accession should be settled by a reference to the people.” This statement of Mountbatten was to evoke an almost violent reaction from MC Mahajan, who was the then Prime minister of Kashmir and later became the Chief Justice of India.

In his Accession of Kashmir to India (The Inside Story), the learned judge wrote: “The Indian Independence Act did not envisage conditional accession. It could not envisage such a situation as it would be outside the Parliament’s policy. It wanted to keep no Indian State in a state of suspense. It conferred on the rulers of the Indian States absolute power in their discretion to accede to either of the two dominions. The dominion’s Governor General had the power to accept the accession or reject the offer, but he had no power to keep the question open or attach conditions to it.” What is also not in dispute is the Himalayan bungle created by Nehru’s Government of the time. On January 27, 1948, India and Pakistan submitted a draft proposal to the president of the United Nations Security Council on the appropriate methods of solving the Kashmir dispute. According to the Security Council verbatim reports cited by Justice Anand, the Indian representative on the floor of the Security Council made it appear that the final status of Kashmir was to be determined by plebiscite although the legal nature of Kashmir’s accession was the foundation of India’s case.

Years later, the problem in Kashmir is often represented primarily as a matter between India and Pakistan and framed around the issues of the legitimacy of Kashmir’s accession to India during independence. But this is not the problem today as circumstances since the accession have changed such that insurgency is now largely fuelled by an increasingly hardliner Pakistan state. The ethnic and religious diversity in Jammu & Kashmir, which is divided into three regions, has contributed to the complexity of the Kashmir problem.

The current violence cycle of the insurgency was started in late 1980s — it began as an ethnic issue. However, over the years, insurgency has been carefully and deliberately cultivated into a religious one. This created an environment of intolerance, intimidation and ultimately, violence throughout the Valley that only exasperated other existing tensions: A situation that led to the exodus of the Kashmiri Hindu pandits from the region. With Prime Minister Narendra Modi securing a majority in the second term and Union Home Minister Amit Shah at the helm of affairs, the Central Government will now take on the Kashmir issue much more assertively than it did in its first term.

One of the key shifts in the new Government’s approach to Kashmir is that while prior to May 2019, the focus was on dealing with the separatists with an iron hand, the focus now is to make the Kashmiri separatist and dynast leaders irrelevant altogether. National Security  Advisor Ajit Doval has pushed for a muscular policy in dealing with the present crisis in the Valley with fair success but India was missing a bold Home Minister in Modi 1.0 to translate Doval’s initiative at the legislative platform. Shah has bridged this gap with Modi 2.0 leading to appropriate legislation in the Parliament to address the Kashmir issue, seeking permanent solution from an Indian perspective.

On the domestic front, the first part of the policy involves scaling up military action against terrorists in Kashmir. The second part of this policy involves the relentless pursuit of individuals and outfits, who claim to be self-styled representatives of the Kashmiri Muslims and support radicalism — directly or indirectly. No one will be spared, no matter how much influential. The National Investigation Agency has already seized assets worth Rs 1,400 crore and has launched an investigation in 21 cases. The Central Board of Direct Taxes and the Enforcement Directorate are working overtime in the State, identifying, tracking and shutting down all means to fund terrorist activities. A massive crackdown on the Jamaat-e-Islami has begun. The outfit has a strong influence in south Kashmir and is largely held responsible for turning the four districts in the region into a hub for terrorism. This crackdown is going to get stronger in the days to come until the outfit is made completely redundant. Similarly, tougher action is being taken against separatists, not just cosmetic ones. Many leaders have been shifted to prisons outside Srinagar so that the Valley does not come under their influence.

The writing on the wall is clear: Narendra Modi and Shah are discarding the old guard in the State and building a new leadership from the grassroot. The abrogation of Article 370 and 35A shall facilitate larger integration of Jammu & Kashmir with the rest of the country. As India is marching ahead towards becoming a $5 trillion economy, policy-makers must not exclude Jammu & Kashmir State from the fruits of development just to please a few feudal families threatening the State of India of false repercussions. Jammu & Kashmir has been a victim of protecting the rights of a few political families rather than the people and then one of the tallest Indian leader Syama Prasad Mukherjee has correctly predicted in 1952 that the Indian State must abandon Prince and Czars of Kashmir to let it freely integrate with the Union of India to blossom in a prosperous integrated society. The historic decision to abrogate Article 370 and re-organisation of the State by the Modi Government shall facilitate faster development of the State with the nation.