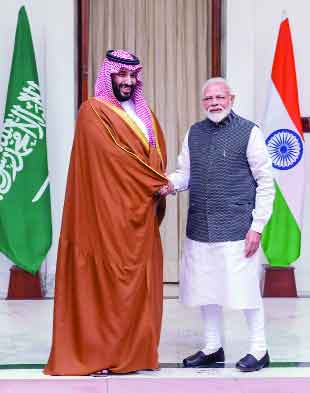 For some, it might seem incongruous that Prime Minister Narendra Modi received Crown Prince of Saudi Arabia, Mohammed bin-Salman (MbS), at the airport when the de facto ruler of the world’s largest oil producer and effective leader of the Muslim world landed in India. MbS, as a young leader who styles himself in an attempt to be cool with young Saudis, had after all just gone to Pakistan merely days after the Pulwama attack and not even rapped the Pakistanis. But then, screamed critics in India, why was Narendra Modi going to receive MbS at the airport? He should have been given the same treatment that Justin Trudeau, the Canadian Prime Minister, got during his official visit last year thanks to the Khalistani links of that government.

The problem is that this is a complicated geopolitical issue that cannot really be brought down to simplistic arguments. The close ties between Saudi Arabia and Pakistan go back a long way, to the formation of Pakistan as a theocratic Islamist state. Saudi Arabia provided Pakistan with money and weapons during the 1965 and 1971 wars, and it was rumoured to have even provided fighter pilots. Pakistan plays a role for Saudi Arabia as well, it channelised Saudi money and citizens such as Osama bin Laden into Afghanistan where they fought as mujahideen against the Soviet Army in what became a “Holy War” of sorts. Given the shortage of Saudi citizens wanting to be enlisted soldiers, Pakistani citizens make up large numbers in that nation’s army. And it was Pakistani special forces that finally helped the Saudi state and the ruling al-Saud family during the dramatic 1979 rebellion in Mecca when the Kaa’ba itself was stormed. Today, Pakistan is a pawn in Saudi Arabia’s undeclared war with Shia Iran. So when MbS says that Pakistan has the potential for $20 billion in investment, he is in essence repaying a debt to Pakistan.

Therefore, some might ask why India should entertain a man so obviously allied with Pakistan. Of course, India’s huge Muslim population is the most obvious reason, so keeping MbS and the Saudi state at least partially on one’s side is the intelligent thing to do. And it is no secret that Modi has received very few leaders at the airport, MbS and previously Benjamin Netanyahu, Prime Minister of Israel, being two of them. India plays a critical role between those two nations, in fact that is why Air India got overflying rights over Saudi Arabia for its Tel Aviv flight. And then there is the simple fact that Saudi Arabia is home to millions of Indians and the remittances they send here are still important to our economy. MbS wants to encourage the ‘Saudisation’ of the job force in his country which will be detrimental to Indian workers, so keeping him on our side is strategic. Of course, Saudi Arabia is and will remain one of the largest suppliers of oil to India and now as it prepares for a post-oil future, its funds to India’s start-up economy matter as well. MbS is no hero, his role in the brutal murder of columnist Jamal Khashoggi and the way he went after his rivals in the Saudi court should worry people. But we have little choice but to keep Saudi Arabia happy. However, it is plainly clear that MbS is learning on the job and has realised that prickling India is not the way to go even for him.