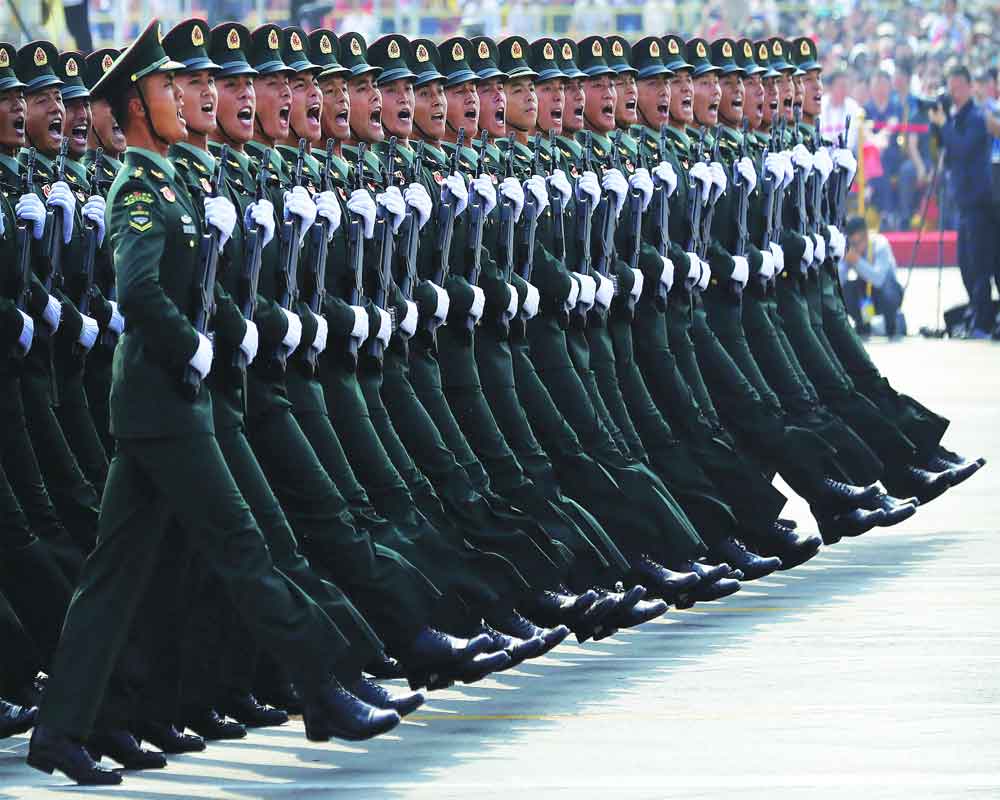 While President Xi Jinping has promised ‘New Era’ that sees China as a top global power, many in China feel what the Communist Party is projecting to the world is an incomplete narrative of the progress

China is celebrating its 70th year of the Communist revolution this week. On October 1, 1949, Mao Zedong, the first President, better known as “Chairman Mao”, proclaimed the birth of the People’s Republic of China. Since then, and particularly after the death of Mao, China has taken the road to world stage, brick by brick. And, equally and forcefully, its only ruling Communist Party has established its mark as the “heart and soul” of the Chinese people.

The celebration showcased China’s long march to global superpower status with a military parade involving more than 15,000 troops and weapons, including new hypersonic drones and intercontinental ballistic missiles. But against this backdrop, what is more discernible is the strong word of warning from China’s eternal President Xi Jinping: “No force can shake the status of this great nation”.

It reminds the international community of China’s global aspirations and its ability to counter the Western hegemony. Undoubtedly, China has grown at an extraordinary pace since its independence unlike any other developing nation. But it must be noted that it’s considered one of the most authoritative states of the world. Its severe curb on civil liberties, political freedom, and, particularly, the flow of information epitomises the modern Chinese leadership’s extreme caution about any impending danger from any quarter. For them, a modern liberal state is a threat to the state, especially the Communist Party’s survival. But despite its hard-earned success, the party and its successive leadership have to encounter the predominant West, Japan and India.

China’s carefully choreographed show of strength and unity at 70 is largely dampened by violent protests in Hong Kong. Ceaseless efforts of the demonstrators for nearly three months show no sign of retreat. Hong-Kongers’ demand for the resignation of Carry Lam  has now intensified for full autonomy from Beijing. Clamour for freedom is growing louder every passing day.

Looking at global insecurity and violent warfare around, what Xi should have longed for is “Heping jueqi” i.e. peaceful rise, (later known as peaceful development i.e. heping fazhan). Further, he should surely be guided by the prophetic words of great Chinese war strategist, philosopher and writer Sun Tzu, who rightly said, “A leader leads by example, not by force.”

Simmering disputes in Taiwan and over South China Sea demand a conciliatory approach rather than showcase of the sheer military strength. Besides, the reported suppression of basic rights in Xinjiang and in Hong Kong could have been dealt by the Communist leadership in a peaceful manner. These instances will spark more violence in Hong Kong. It’s not simply the failure of Carrie Lam’s leadership; it also indicates indecisiveness on the part of the Communist leadership in Beijing.

All of them (both Beijing and Hong Kong’s mainland proxies) have moved much before the coming of the historic year of 2047. A few of us are aware about or talk about the Article 5 of the Basic Law. This Article clearly promises that Hong Kong’s existing since 1997 way of life will remain unchanged for the coming 50 years. It says, “The socialist system and policies shall not be practiced in Hong Kong Special Administrative Region, and the previous capitalist system and way of life shall remain unchanged for 50 years.” But at the current rate of erosion and imposition of the Communist system, nothing is left to speculate about what will happen after 2047.

At the moment, for Xi and the future generation of leaders, it is better to acknowledge the problems first and try to fix them through massive political and economic reforms. Anyone closely monitoring the crumbling liberal order will agree that it’s time for China to rise to the occasion and offer to the world a new system wherein development continues with a huge free market economy, but without any political reform. Many Western pundits predicted that with the arrival of globalisation, the Chinese system would be giving way for a democratic set-up. But belying all these predictions, China has moved as it was, only by opening the door for a liberal economic order.

However at 70, what global political observers say about China is that in 2017 itself Xi had positioned himself as “globalisation’s most vocal champion” in his speech to the world leaders at the World Economic Forum in Davos, Switzerland. Since then, the global leadership void created by US President Trump’s leadership is only growing stronger around the world. By January 2018, the party’s top newspaper called on China to seize this “historic opportunity” to reshape the world order. It says, “The world has never focused on China so much and needed China so much as it does now”. However, during the last year’s Davos Summit, Xinhua put it bluntly, “The world should choose from Xi’s ‘Shared Future Vision’ and Trump’s ‘America First’ policy — two opposite outlooks for the state of the world.”

With this, what we can foresee is that China will tread, whatever happens, to make the world realised that there is an alternative to the Western political system. Indeed, it’s time now to see a new kind of political and social engineering wherein nations will have options in their platter to choose either a Western or an Asian political system.

However, chartering a new world order could be a Herculean task for China. As other emerging powers such as India, Brazil, Argentina, Japan, South Africa, etc, are equally claiming their space in the world stage, Chinese leadership will have to accept the reality of a multi-polar world.

But then, what Xi proclaims is entirely a new world. He himself declared a “New Era” that sees China as a top global power. He says, “It will be an era that sees China moving closer to centre stage and making greater contributions to mankind.”How “Socialism with Chinese characteristics” under Xi will steer the world in the 21st century would be worth watching. Many in China feel what the Communist Party is projecting to the world is an incomplete narrative of progress. How Chinese society has been affected by various global and glocal actors in the last seven decades could be witnessed across the country. It’s not well for all the Chinese people; and its political leadership has not been able to respond to all sections of society. Chinese socialist Guo Yuhua says, “For several generations, people have received a history that has been falsified, faked, glorified and whitewashed.”

On the face of such critics, Xi needs to reach out to its populace more than reaching out to the world. It’s important and critical to provide a sense of equality to all sections of society. His big and bold “China Dream” would need to be more realistic so as to offer China much stronger and free atmosphere at home than the world knows now. His world of ideas should have less of Mao and more of Deng or else a fine balance of both the legends.