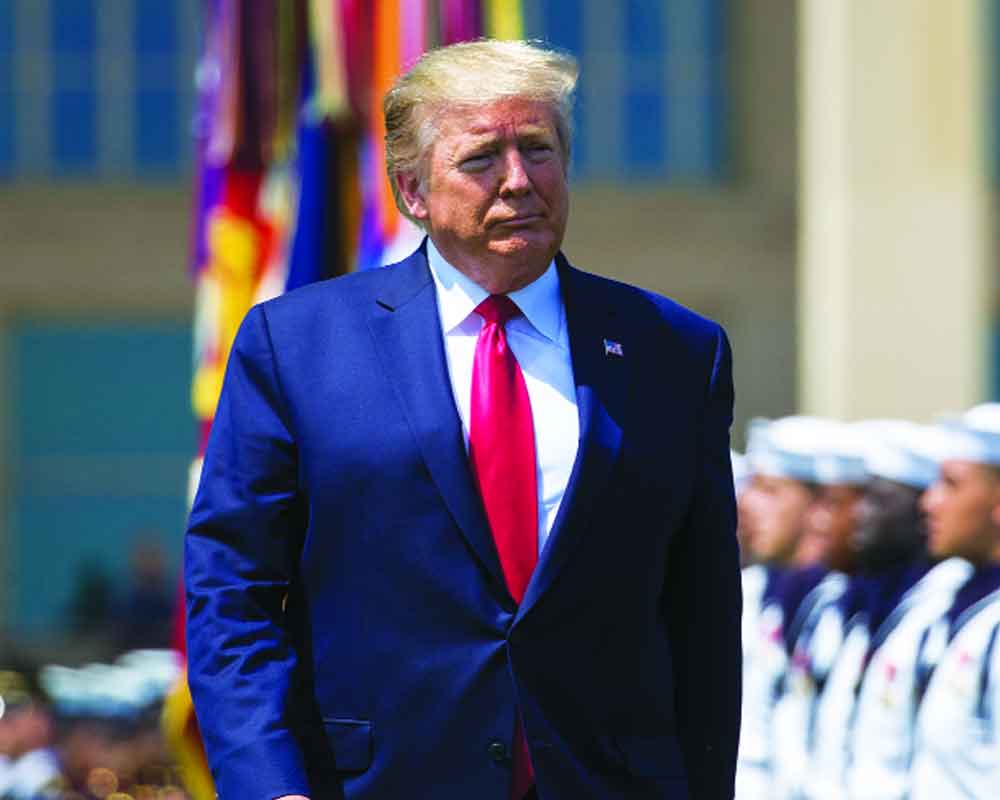 Trump’s short-term tactic of intruding into the hallowed precincts of military order is to play with fire in the long term. It is sure to dilute the culture within the rank and file

Participative or liberal democracies are predicated on the concept of civilian control over the military. In his book, The Soldier and the State,  Samuel P Huntington expands on the idea as “the proper subordination of a competent, professional military to the ends of policy as determined by civilian authority”, wherein the State apparatus of the armed forces is constitutionally subordinate to the civilian-elected politicians or the constitutional heads. Various democracies have wired this uniquely within their own political frameworks, with the President assuming the role of the supreme commander of the Indian armed forces. In the UK, the reigning monarch is referred to as the commander-in-chief of the armed forces of the Crown. In the US, Article II of the Constitution establishes the President to be the commander-in-chief.

However, the healthy deference to the professional, doctrinal and experiential realm of necessities and skills has ensured that there is minimal interference on military matters.  Only in exceptional cases has the “commander-in-chief” exercised that power to intrude — other than ensuring the overall direction and deployment of the armed forces — in line with the national plans, objectives and vision. This delineation of day-to-day functioning has resulted in the discipline and efficacy of the armed forces, as indeed in the fruition of the democratic culture in such countries.

Instances where a US President intervened in the affairs of the military are far and few and such occasions entailed a certain seniority and issue-of-magnitude, wherein the direction of the military was seen to be going in contravention with the declared sovereign preference. For example, Abraham Lincoln dismissed General George B McClellan in the American civil war; Harry S Truman relieved Gen Douglas MacArthur during the Korean war. More recently, former US President Barack Obama accepted Gen Stanley A McChrystal’s resignation. These are instances, which had stakes of policy or strategic dissonances.

However, the recent act of US President Donald Trump intervening churlishly in the proceedings against the chief petty officer, Edward Gallagher, the Navy Seal, had all the hallmarks of undercutting professional authority, systems and culture of American armed forces. Gallagher was initially accused of murdering a wounded Islamic State (IS) militant (for which he was acquitted by a military court) and for posing with the dead prisoner’s body (for which he was found guilty). A US Navy had initiated a probe to determine the suitability of Gallagher continuing to serve in the elite Navy Seal team, which earned Trump’s attention and ire. In a shocking callous manner, Trump tweeted against his own Navy and ordered a probe by the Trident Review Board. He ranted, “The Navy will not be taking away Warfighter and Navy Seal Gallagher’s Trident Pin. This case was handled very badly from the beginning. Get back to business!” This unnecessary interference with the military-judicial proceedings led to the resignation of the Secretary of Navy, Richard Spencer, who stated dignifiedly, “Unfortunately, it has become apparent that in this respect, I no longer share the same understanding with the commander-in-chief, who appointed me.” Spencer’s comment was eerily similar to the parting comment made by James Mattis (former Secretary of Defence), who, too, met with a frustrating roadblock in explaining military matters to the whimsical Trump.

Both Spencer and Mattis are former Marines, who understand the command structures of the military realm where the authority to exercise and enforce discipline ought to be respected, uninterrupted. No amount of professional counsel by the “uniformed” staff or experienced veterans in the Trump regime — about the larger impacts on discipline, morale, authority-command structures, as also setting a dangerous precedent — could convince him to backtrack his ill-thought decision.

Navy Seals are acknowledged as the “cream of the crop” in terms of combat efficacy that is born out of superhuman training, discipline and skills in combat operations. Yet, concerns have been expressed lately by none more relevant than  the Commander of Naval Special Warfare Command (in-charge of Seals), Rear Admiral Collin Green. He warned bluntly, “We have a problem. I don’t know yet if we have a culture problem.  I do know that we have a good order and discipline problem that must be addressed immediately.” He noted the importance of accepting the same to “recalibrate culture and regain credibility.” While the importance of discipline, ethics and character can never be overstated for the sort of sensitive and high-profile operations that the Seals undertake, the heft of the same is completely lost on Trump. He milks any opportunity towards his populist, reckless and divisive politics.

This latest slight in the ongoing civil-military relations is not just about Spencer but the entirety of the Naval “uniformed” staff (including Rear Admiral Collin Green), who were in favour of restoring discipline and professionalism. The psychology behind Trump’s intransigent and irascible politics is rooted in his supposedly “muscular” actions that seem to allay the manufactured fears of various supposed “dangers.” Towards the same, positing such deviant Seals as “heroes” is the sort of Ramboism that goes down well among a large section of the ignorant and polarised society.

All of Trump’s actions are part of the uber-nationalism drive that necessitates fear mongering, extremist military reactions and unashamed disdain for decorum. This gives him the bullet-proof image to emerge as the all-American superhero in the heartland of the proverbial “rednecks.” It is an approach that the late military veteran, Senator John McCain, lamented towards his supporters, “What he did was he fired up the crazies.”

However, this short-term tactic of intruding into the hallowed precincts of the military order, traditions and ethos is to play with fire in the long term. It is sure to dilute the culture within the rank and file of the military with the infusion of partisan politics, interference and the diminishment of the existing command structures.

This unprecedented precipice risks undoing the proud steel of the US military and its accompanying culture that has persevered for centuries, especially that of the Navy Seals who pride in saying, “The only easy day was yesterday” — all for vote bank politics.