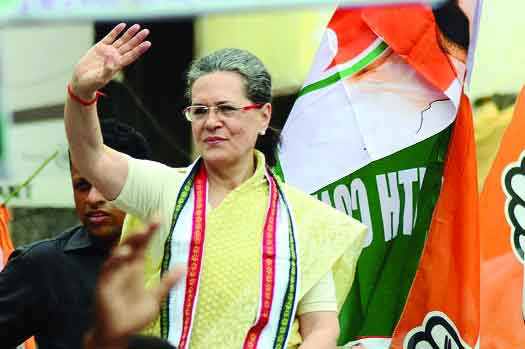 As election results draw closer, with some predicting the possibility of a reduced tally for the Bharatiya Janata Party (BJP) and a strong showing by federal players, the Congress has decided to croak with right-sounding noises. And though it played a spoiler rather than being an enabler in stitching a pre-poll alliance, appearing selfish about its own organisational gains than being a responsible Opposition entity, it fears a backlash and wants to make palliative amends. That’s why senior Congress leader Ghulam Nabi Azad sought to calm doubters that the party was downplaying this Lok Sabha election only because it did not have a shot at prime ministership with placatory statements that should have been made a long time ago and could have made a difference. He has said the party would not make it an issue if the Prime Minister’s chair was not offered to it. This is being read as a message to allies and prospective federal partners — some of whom are more qualified in terms of depth of political experience and leadership than Congress chief Rahul Gandhi — that they do not have to pay obeisance to the grand old party simply because it had a bigger national footprint. Everybody knows a Congress-led government rather than a federal front-led one has been the deal-breaker of the mahagathbandhan. So this change of tack regarding territorial might means the Congress has realised that it needs props or could well find itself on crutches. While leaders such as MK Stalin, Tejashwi Yadav and even Arvind Kejriwal have said they were ready to support Gandhi, stalwarts such as Sharad Pawar, West Bengal Chief Minister Mamata Banerjee and Bahujan Samaj Party (BSP) chief Mayawati consider themselves better claimants. This is the reason why UPA chairperson Sonia Gandhi, too, has stepped out of the shadows to begin confabulations with allies and neutral players like Biju Janata Dal (BJD) chief Naveen Patnaik and Telangana Chief Minister K Chandrashekar Rao. The last has been particularly in the news for pushing a non-BJP, non-Congress third front and making his entry to the grand alliance conditional on not surrendering control to the Congress. Sonia is reported to be making the best efforts for a rapprochement for she realises that the Congress would be considered a villain in the event of a decisive win of the BJP-led coalition and the party could be further reduced in significance and perhaps would have to abandon hopes of winning any other Lok Sabha in the future. So she and her trusted aides have already begun working the phone lines to kingmakers like Andhra Pradesh Chief Minister Chandrababu Naidu and also YSR Congress’ Jaganmohan Reddy. By widening the umbrella and assuring that she was still the power centre, Sonia wants to keep a UPA III ready in case of a fractured mandate.

Rahul Gandhi and sister Priyanka may have breathed fresh life into the Congress and built a youth-driven machinery but are still not ripe enough to deal with challenges of realpolitik and the oversized egos of veterans. Sonia is still the bridge for both the Opposition and the generational divide within her own party. She has the better experience of being an adhesive of multi-party interests, having negotiated the troublesome journeys of UPA I and II. Many alliance partners and potential ones prefer to deal with her directly, given past associations, than Congress president Rahul Gandhi. This was evident during the Karnataka alliance with HD Kumaraswamy last year. Even Trinamool Congress chief Mamata Banerjee has said she was more comfortable with Sonia. She is the only reassurance and voice of reason for the old guard, who see their continuity through hers. This is why she gave the chief ministerial posts in Rajasthan and Madhya Pradesh to seniors like Ashok Gehlot and Kamal Nath, who in turn have favourable inter-personal relationships across the political spectrum. Question is if she can diagnose the ills now, why didn’t she seize the alliance initiative earlier? For no doubt, if the Opposition does come within hand-shaking distance of power and fails because of the split in the anti-BJP vote, the Congress would be wholly to blame. It could have supported a federal front from the outside and still prepare itself for 2024. It can forget a comeback with an emboldened BJP return.