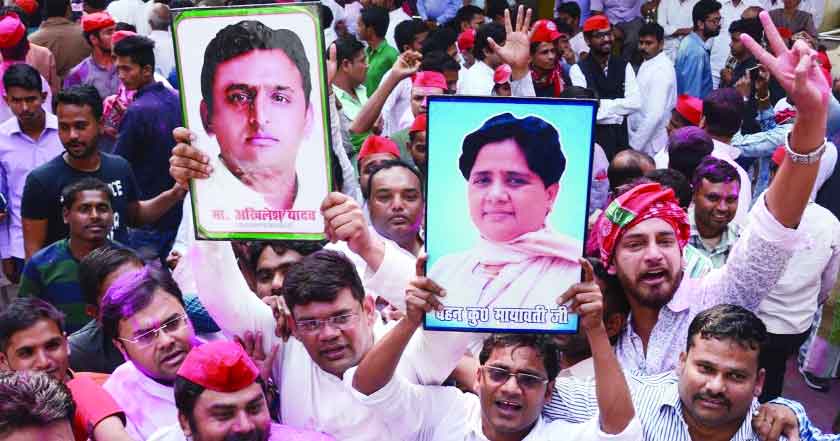 SP, BSP are in sync with the number game, making Uttar Pradesh a three-cornered fight by isolating Congress

If anybody had any doubt about the absurdness or the incompatibility of the Samajwadi Party-Bahujan Samajwadi Party (SP-BSP) alliance, then their leaders did some straight talking from the word go minus theatrics to show that they mean business. Really mean it. So if it was Akhilesh Yadav warming up the pitch for the grand announcement, it was Mayawati who took charge at the press conference, a perfect choreographed act of the junior making way for the senior. First, she explained in great detail why there were more reasons to join hands with the SP, even cited history and clarified she had forgotten and forgiven the infamous guest house case, where SP supporters assaulted her men after BSP withdrew support from the then Mulayam Singh Yadav government (1995). So no thorns in the flesh here. Second, she assured the alliance would have a long life, beyond the Lok Sabha and even Assembly elections, instantly dissolving rumours of it being an opportunist survival tactic. And finally, she explained why they had shut the Congress out from their group while courteously  leaving its two family seats of Rae Bareli and Amethi. The Congress votes simply didn’t get transferred or bolster either party’s bottomlines as Akhilesh had learnt it the hard way during the last Assembly elections. But as the bypoll results showed, the SP-BSP votebase convergence had robbed the sheen of the freshly minted win of BJP’s Yogi Adityanath. Scientifically, none could afford the deadwood or risk losing vote shares. In fact, both pushed the Congress completely out of the arena, equating it with their common enemy, the BJP. They also deflated the Congress balloon on Rafale, saying it was as guilty as the BJP in creaming off defence deals. Congress could wait as they had the arms.

Besides, both leaders gave an assurance of watching out for each other, she calling the rival SP group by Akhilesh’s uncle as a BJP plant and promising to stand by him in CBI probes, he declaring her “insult as my insult.” In fact, Akhilesh has been mature enough to take a step back and field her as a Prime Ministerial candidate and give her pride of place as the more experienced leader. But seat-sharing wise, both had a 50:50 parity. Both strategically sounded the bugle of them being the leaders of a formidable alliance that would not settle for half measures or play second fiddle to anybody. Additionally, they have left two seats for other caste parties too to keep them away from the BJP poachers. Of course, there are challenges of compatibility at the ground level of combining Yadavs with Dalits and ensuring both vote for each other’s candidates in seats forgetting historical bitterness, turf comfort and candidate personalities. Still the loyalist BSP cadre ensures almost a hundred per cent vote shift in alliance agreements and Akhilesh has to charge up his cadres to reciprocate. Not impossible though considering SP patriarch Mulayam Singh Yadav had helped BSP leader Kanshi Ram win his first Lok Sabha elections from Etawah, defeating the BJP which was cresting the Ram temple tide back then. So it is not an impossibility. Very deftly, they have described themselves as a coming together of Ambedkar and Lohia followers as seekers of social justice against the oppressive upper caste, Thakur raj of Yogi Adityanath.

The Congress has clearly been left out in the cold and the SP-BSP made it clear which side needs the other more. The Congress vote share in UP is still in single figure, nor are its voters loyal enough to migrate to caste-based parties. The Muslims are not with it. In such a situation the Congress as a vote-cutter works for the SP-BSP combine and prevents the BJP from polarising a simple two-way fight. Therefore, the leaders completely lumped it as an equal enemy with the BJP by raking up Bofors and Emergency. But they stayed away from personal attacks on Congress leaders or family, leaving the door ajar for a possible post-poll arrangement. But right now the Bua-Bhatija duo would love to be frontline warriors, confidently taking down the guru-chela team of Narendra Modi and Amit Shah on their own.