The fatal game of opportunistic politics

The fatal game of opportunistic politics 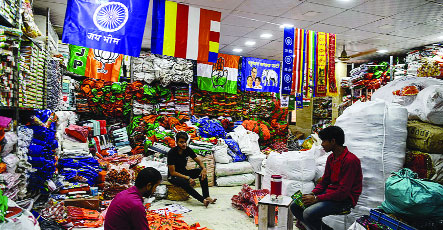 The odds of the BJP stealing the narrative from real issues like jobs and farmers’ crisis to build its campaign on the twin planks of nationalism and terrorism are not lost on anyone. The Opposition has a lot of catching up to do

With elections round the corner, the Opposition still seems to be groping for a solid and cohesive poll narrative against the Modi Government, while the ruling BJP has identified terror and nationalism as its main theme. The Opposition had been concentrating on a basic plank, essentially on livelihood issues. It was confident of taking on the Government with issues like jobs, agrarian crisis and demonetisation — all of which determine the outcome of the polls as it affects the common man.

However, this was the scenario till the Pulwama and Balakot incidents happened last month. Also, until then, the Opposition was in an advantageous position after the BJP lost three States to the Congress in the Hindi heartland — Rajasthan, Madhya Pradesh and Chhattisgarh in December last year. Momentum was gradually shifting from the BJP to the Opposition. An upbeat Congress began its campaign with high spirit during the New Year.

West Bengal Chief Minister Mamata Banerjee and her Delhi counterpart, Arvind Kejriwal, organised two impressive rallies to show off Opposition unity in Kolkata and Delhi respectively. The Opposition became aggressive and the BJP, until six weeks ago, seemed to be the only responding to its campaign on Rafale deal rather than setting the agenda.  There’s no doubt that last month’s unprecedented events — Pulwama terror attack, the retaliatory Balakot air strikes, the capture and release of Wing Commander Abhinandan Varthaman by Pakistan — have made ‘security’ and ‘terrorism’ the key poll issues, thus bringing nationalism to the forefront.

The Opposition lost the momentum it briefly acquired to put the BJP on the defensive. The saffron party quickly snatched the advantage and began to build its poll campaign on the twin planks of ‘nationalism’ and ‘terrorism’. All earlier issues like the building of the Ram temple in Ayodhya and triple talaq were pushed to the backburner.

Obviously, the BJP has regained the political narrative for the electoral battle while the Opposition is still twiddling its thumbs as to how to bring back the livelihood issues to the forefront as they cannot criticise the Government on intelligence failure beyond a limit.

The Opposition is also not doing a united campaign at the national level. The BJP is taking full advantage of its disunity and appears to have successfully projected itself as the party best suited to guard the country against terrorism, sponsored by Pakistan. On the ground, each Opposition party has been doing its own campaign. The Opposition claims that though there is not one single narrative at the national level, individual parties will campaign on the common theme that the BJP must be removed because of its failure on various fronts, including unemployment and farmers’ issues. “Every party has to stick to its own platform,” claimed a Left leader.

As for the Congress, the principal Opposition party, its president, Rahul Gandhi, is running a sustained campaign on the Rafale deal for the past few months but it is not catching up. Also, the Congress fell into the BJP’s trap when it changed the poll narrative to Pulwama and ‘Chowkidar’  baits instead of focusing on bringing the real issues back.

The BJP is happy to dwell on these issues as it diverts attention from other subjects like jobs and agrarian crisis where the Modi Government has really not lived up to the expectations. The BJP is going all out with its latest mass campaign — ‘Main Bhi Chowkidar’ and ‘Namumkin ab Mumkin Hai’, slogans showing Modi as the supreme leader who can solve India’s problems. The BJP hopes to win the elections mainly on the weakness of the Opposition, whose much-touted ‘Mahagathbandhan’ at the national level still remains an idea and not a reality; although there are State-specific coalitions.

The second is Modi’s presidential style of campaigning. It is Modi versus no Opposition face, which can limit the Opposition’s chances. Third, it is the failure of the Opposition to come up with a credible and effective narrative, capitalising on the Government’s weaknesses. On the other hand, the BJP has been able to determine its agenda by getting away with its diversionary tactics. Fourth, the BJP has stitched alliances in various States, even ceding space to the allies; whereas the Congress is still dilly-dallying.

However, the BJP also knows that it will be difficult to sustain the Pulwama and Balakot themes for the next two months; though it got a big boost to its campaign in the past few weeks. As time passes, it would get further diluted. Therefore, the BJP needs a winning narrative. The Opposition, too, needs an effective counter-narrative. All these in an electoral background where there is no ‘hawa’ for or against any party, no highly emotional issues, not much of anti incumbency against Modi and unlike 2014 no ‘Modi wave’. The results will show who has the right narrative this time — the NDA or the UPA.