The intolerance of Time

The intolerance of Time 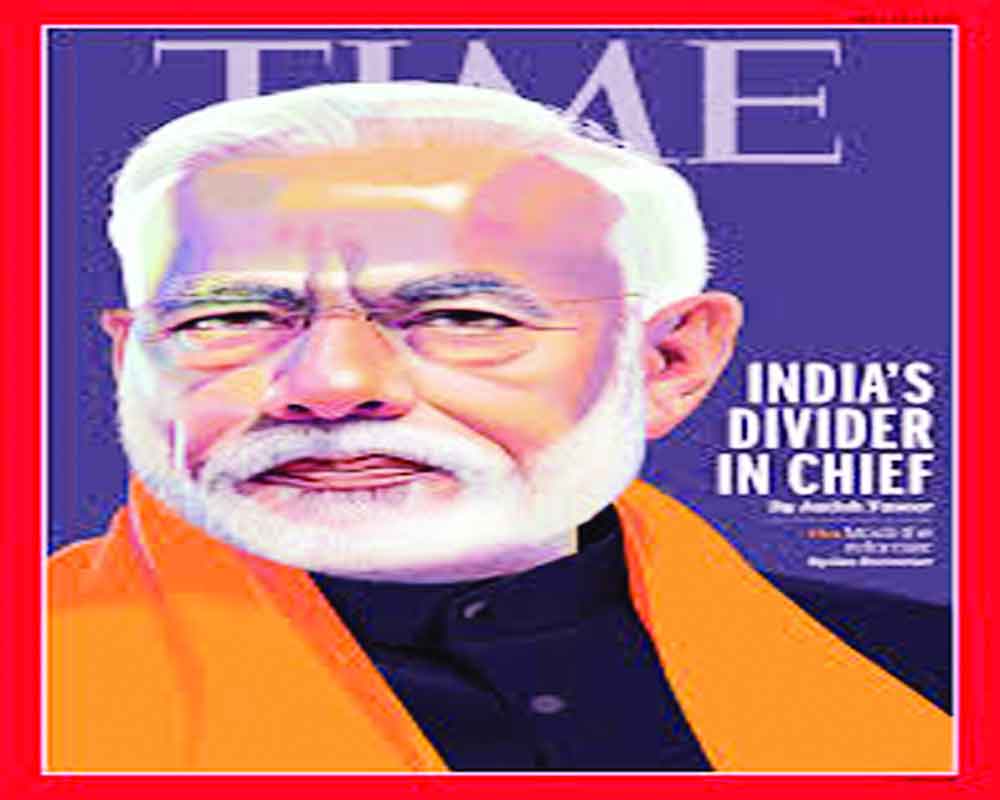 Nation-centric leaders like Putin and Modi are being subjected to a dominant Western narrative of leadership. Modi’s rise is actually a revolt against the Nehruvian order

It is unproductive to speculate why but a vocal section of the Western commentariat is showing an increasing intolerance towards strong and nation-centric leaders in the rest of the world. Three notable examples are Russian President Vladimir Putin, Chinese Premier Xi Jinping and Indian Prime Minister Narendra Modi. Putin won in May 2018, Xi can’t be toppled and Modi is currently fighting for re-election. This is, therefore, an opportune moment for venomous attention from underworked writers.

Smack in the middle of a heated election, the burdened White men of The Economist, London, intoned, “Under Narendra Modi, India’s ruling party poses a threat to democracy. Voters should turf it out, or at least force it to govern in coalition” (May 2, 2019). The magazine asserted that while Modi had not been as good for India as his cheerleaders had promised, nor as bad as his critics had imagined, “today the risks still outweigh the rewards. Indians, who are in the midst of voting in a fresh election, would be better off with a different leader.”

India’s swift retaliation for the Pulwama massacre of Central Reserve Police Force jawans seems to have provoked of The Economist’s ire. It notes, “… sending warplanes to bomb India’s nuclear neighbour earlier this year was not so much an act of strength as recklessness that could have ended in disaster.” Predictably, it disapproves of anti-terrorist actions in Jammu and Kashmir.

A week later, Time, New York City, the US, published a cover story titled, “Can the World’s Largest Democracy Endure Another Five Years of a Modi Government?” (May 8, 2019). A portrait of a grim, unsmiling Modi frowns at viewers even as writer Aatish Taseer describes India’s ruling dispensation as “rabble.” Glossing over the unequal treatment of communities under Nehruvian secularism, he says, “Nehru’s political heirs … established a feudal dynasty, while outwardly proclaiming democratic norms and principles. India, under their rule, was clubbish, anglicised and fearful of the rabble at the gates. In May 2014, those gates were breached when the BJP, under Modi, won 282 of the 543 available seats in Parliament, reducing the Congress to 44 seats, a number so small that India’s oldest party no longer even had the right to lead the Opposition.”

Modi, claims Taseer, belongs to the brand of populists, who are of the people they represent, like Erdogan (Turkey) and Bolsonaro (Brazil). Son of a tea seller, “his election was nothing short of a class revolt at the ballot box… [it revealed] a cultural chasm. It was no longer about left or right, but something more fundamental”. Worse, “The cherished achievements of independent India —secularism, liberalism, a free Press — came to be seen in the eyes of many as part of a grand conspiracy in which a deracinated Hindu elite, in cahoots with minorities from the monotheistic faiths, such as Christianity and Islam, maintained its dominion over India’s Hindu majority.” Taseer dubs Modi’s victory an expression of that distrust.

Actually, non-deracinated Hindus from the same educational and professional backgrounds led the revolt against the Nehruvian order. We may call it the return of the heirs of Tilak, Aurobindo, Bose and others given short shrift by the historians and hagiographers of independent India’s new masters. There is no yawning economic chasm between supporters of the Bharatiya Janata Party (BJP) and Congress, as Taseer insinuates; no French Revolution-style upsurge of have-nots against feudal lords. Beginning with the founder  of the Rashtriya Swayamsevak Sangh (RSS), KB Hedgewar, from which most BJP leaders come, the party has comprised largely urban middle class professionals (doctors, lawyers, teachers and engineers) — not exactly an under-proletariat.

But the Time article seems to have an agenda. One objective is to exonerate the Congress for the targetted killing of Sikhs after the assassination of Prime Minister Indira Gandhi. It says, “The Congress leadership, though hardly blameless, was able, even through the selective profession of secular ideals, to separate itself from the actions of the mob.” This is simply untrue. Rajiv Gandhi took HKL Bhagat and Jagdish Tytler (named in many citizens’ reports) into his Cabinet. However, Taseer blithely blames Modi for the Gujarat riots of 2002, even though he had been sent to the State only months ago to supervise relief and reconstruction after the Bhuj earthquake (2001). This is the context in which Modi arrived in Gujarat; any analysis that ignores this is intrinsically flawed.

For honest reporting, Taseer could have asked the Union Ministry of Human Resource Development for statistics regarding the special scholarships for minority students, including for study abroad; and the free coaching for minority (read Muslim) aspirants for IAS. Above all, he could have checked their mark sheets to see how many made the grade through (inflated) marks during interviews.

India’s majority community had some legitimate expectations from the Government in 2014. One was scrapping the atrocious Right to Education Act imposed by the erstwhile regime, under which the State refused to improve education in Government schools and made the Hindu middle class pay for underprivileged children in private schools. Worse, the then government exempted minority-run institutions from giving free education to Economically Weaker Section (EWS) children from their own community, leaving them free to mint money.

The free education quota for EWS forced the closure of thousands of small, cash-strapped private schools that catered to aspirational EWS families. Their children were pushed into non-functional Government schools, while only a miniscule number could be admitted to private schools. In all honesty, the idea of a minority institution is defeated if it does not cater to the community to which it belongs; in fact this should be a condition of minority educational institutions.

Taseer laments that Modi may win again because, “the Opposition, led by Rahul Gandhi, an unteachable mediocrity and a descendant of Nehru, is in disarray.” The Congress has little to offer other than the dynastic principle: “India’s oldest party has no more political imagination than to send Priyanka Gandhi — Rahul’s sister — to join her brother’s side.” Modi, he concludes, “is lucky to be blessed with so weak an Opposition — a ragtag coalition of parties, led by the Congress, with no agenda other than to defeat him.” It is astonishing that Time published these incoherent ramblings as a cover story.