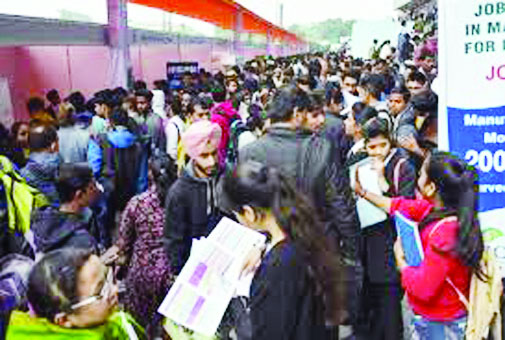 Yes, new ones are being created but the problem is that they are far too less to solve a crisis

Like a wounded lion bristling with pride at those who want to usurp his turf, Prime Minister Narendra Modi made an unusually combative speech in Parliament where he denied that India is in the midst of a jobs crisis. Quoting figures, he said that 3.76 lakh new jobs were added in the Government sector and looking at growing contributions to both the provident fund and the National Pension Scheme, one could see that several million new jobs had been created, at least in the formal sector. While there is no need to doubt Modi, his numbers, tallied with growth in the informal sector, would likely mean that at least ten-twelve odd million jobs have been created in India in the past five years. But here, two problems arise. First being that even though there might have been an improvement in the pace of job creation, it is plainly not enough and in India, like many other parts of the world, there is a challenge in creating middle-class jobs with the appearance of a clear dichotomy of a few high-paying, high-level jobs and millions of low-paying jobs. As Manish Sabharwal of the staffing agency, Teamlease, wrote a few years ago, there are a few Rs 25,000 per month jobs and little prospect for growth for low-level employees. Clearly, the situation hasn’t changed and this is just increasing the wealth and education divide in India. The problem is that neither Prime Minister Modi nor the Opposition has any solutions to this. The core problem is the much-ballyhooed “demographic dividend” in India, which now appears to have been an economy-crushing combination of lower maternal and infant mortality rates without a drop in fertility rates in large swathes of northern and eastern parts. At the same time, dramatic improvements in agricultural technologies and yields have reduced manpower needs. Further, large agricultural families are unsustainable, which has led to mass urban migration with a subsequent realignment in a manner of speaking of traditional caste structures. All of these are huge challenges that have been dealt with by politicians through either quota politics, again not sustainable without enough jobs, or cash doles. But neither of them is enough.

China’s stunning turnaround happened because it moved its people from unsustainable subsistence agriculture to factories and as much complaints as the weather had about China’s factories, they are a whole lot better than the ones in the West when they made the huge leap to the industrial revolution. The problem is that India seems to have missed the manufacturing bus. And while domestic demand has kept the economy afloat, the key consuming class is still around 20-25 million families. India’s ‘great middle class’ as The Economist magazine put it, is “ephemeral.” This is almost circular logic and the only way to boost jobs growth and, thus, demand, is to provide stimulus to the private sector not just to the small-scale industry, but encourage foreign investment with rational policy decisions. This should be the main job for whoever gets the hot seat come May end because we cannot dilly-dally any longer.