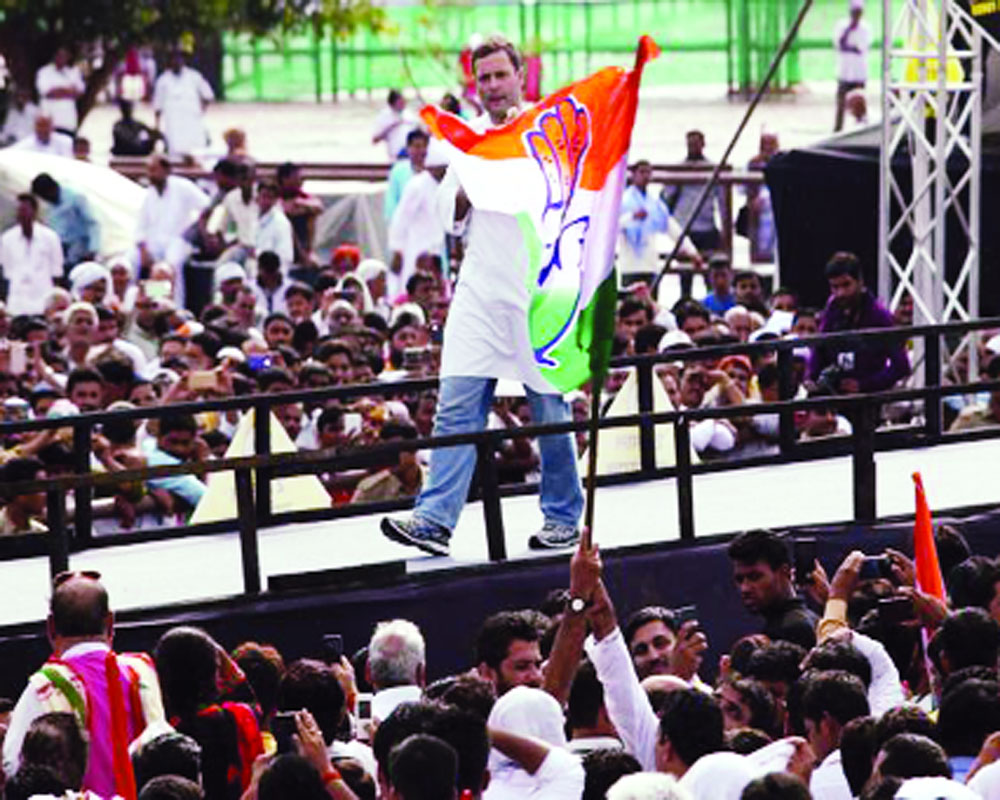 With the Congress remaining dysfunctional and unable to take leadership of regional parties, the BJP can make gains in several States this election season

One of the most remarkable features of this year’s general elections is the failure of the Opposition parties to stitch a “grand alliance” to challenge the Bharatiya Janata Party (BJP)-National Democratic Alliance (NDA). Even more inexplicable is the Congress’ sudden dysfunction, when it should have been upbeat after staving off the BJP challenge in Karnataka (May 2018) and wresting its strongholds of Rajasthan, Madhya Pradesh and Chhattisgarh (December 2018).

Far from seizing leadership of the regional parties, Congress president Rahul Gandhi has failed to set the narrative and lacks the “winning momentum” that the firm, Cambridge Analytica, expected him to gain if his party won in Karnataka, Madhya Pradesh and Chhattisgarh. In fact, Congress also won Rajasthan but it is already so outclassed that a feisty Smriti Irani sent Rahul Gandhi scuttling for a safe seat in distant Wayanad, Kerala.

It remains a mystery why regional parties cold-shouldered Congress after promising, soon after the Karnataka election, that the BJP-led NDA would face a united Opposition candidate on every seat. While the BJP sealed alliances (party workers said it conceded too much to please allies), the Congress failed to have serious dialogues with major parties and was shocked when confronted with the Bahujan Samaj Party-Samajwadi Party (BSP-SP) alliance in Uttar Pradesh. The duo left Rae Bareli and Amethi for the Congress and later gave three seats to Rashtriya Lok Dal; Congress had no choice but to contest all seats (barring seven out of courtesy for SP leaders). However, there are doubts if BSP-SP can successfully transfer their votes to each other.

The Congress is unhappy with its alliance with the Rashtriya Janata Dal in Bihar. It has an understanding with the Nationalist Congress Party in Maharashtra  but the alliance with the Dravida Munnetra Kazhagam (DMK) in Tamil Nadu has yielded only nine seats and one in Puducherry. Adjustments are being worked out with smaller parties in some places but there is no bounce in its gait as it has been pushed to the corner of the stage. In Gujarat, its firebrand new faces — Alpesh Thakur, Jignesh Mevani and Hardik Patel — have crumbled.

Analysts say the regional parties wanted to maximise their own Lok Sabha seats to stake claim to the Prime Minister’s post later, or improve their bargaining position. If true, this is unwise. In 1977, when large sections of the Opposition united behind Jaya Prakash Narayan, it was largely held that Morarji Desai had the foremost claim as he had been “denied” his due after the death of Lal Bahadur Shastri. Charan Singh had his dreams and some felt Babu Jagjivan Ram was the most astute but Desai had the weightage. Similarly, 1989 tilted towards Vishwanath Pratap Singh, though Devi Lal nurtured ambitions.

Currently, major Opposition parties have concluded that Rahul Gandhi lacks the gravitas to be primus inter pares. If this assessment is correct, it is a major blow for the Congress. Moreover, while the BJP is contesting around 450 seats and the NDA plans to contest all 543 seats, the Congress seems likely to contest only around 230 seats. In the unlikely event of Narendra Modi not winning a clear majority, Rahul Gandhi will have to jostle for supremacy with leaders of parties that contested only at the State level, namely, SP (37), BSP (38), Trinamool Congress (42), Telugu Desam Party (25); only the DMK and the Rashtriya Janata Dal are committed to Rahul Gandhi. Further, regional parties may not win all the seats they are contesting; the alliance with the Congress could have strengthened some.

It follows that if the Opposition parties cannot agree on Rahul Gandhi in principle, there is no guarantee they will accept him later. The Janata Dal (Secular) insisted on the Chief Minister’s post in Karnataka in 2018, forcing the Congress to play second fiddle. These parties would also have to thrash out a common minimum programme before collecting letters of support and approaching the President. A single hold-out could bring the whole process crashing down — should it even reach that point.

As of now, the BJP seems slated to make gains in West Bengal, Odisha, Madhya Pradesh, Rajasthan, Chhattisgarh, Karnataka, Haryana, Jharkhand, Maharashtra, Delhi, Tamil Nadu, Kerala, Assam and the North-East; Gujarat remains a stronghold. More pertinently, as the NDA is the only pre-poll alliance in this election, the President would have to first invite Narendra Modi as the leader of this alliance, to form the Government. Anyway, the BJP doesn’t lag when it comes to staking claim.

Rahul Gandhi’s greatest failing is his inability to build a cogent narrative and excessive reliance on slogans and sundry activists. Rafale has no money trail to the accounts of cronies, as Ottavio Quattrocchi had in the Bofors deal. Refusal to drop it after Pulwama shows lack of imagination. As for his trailblazing Nyuntam Aay Yojana (NYAY) scheme, there is zero clarity on what it involves. A US-based advisor, who probably conceived it, has scared the middle class with the threat of higher taxes to fund it. The BJP has neatly countered this with the promise to reduce taxes further. Meanwhile, farmers are angry that the new Congress State Governments have reneged on loan waivers.

The Congress has side-stepped the contemporary narrative over Pulwama, Balakot, terrorism and national security and hopes the Supreme Court will pass strictures on the Rafale deal and help it electorally. The apex court often takes up matters in the domain of the executive but it will remember how the Congress tried to impeach a Chief Justice of India to ensure that the court did not take up the Ram Janmabhoomi case; it will not oblige the party.

More pertinently, the Congress’ promise to remove the Armed Forces Special Powers Act (AFSPA) has shocked the entire military constituency and embarrassed Lt Gen DS Hooda, who heads its panel on national security. Modi has already responded, “Removing AFSPA from Jammu & Kashmir is the same as sending our soldiers to the gallows. I will never let this happen to our soldiers”.

For the Congress, this is a battle of diminishing returns. None of its State Governments have achievements to showcase to the nation (Shivraj Chouhan’s Ladli Lakshmi Yojana became the precursor to many Modi schemes for the girl child).  Hence, it is difficult to see how the party can dramatically improve upon its 2014 performance of 44 seats. Whatever the Cassandras may say, the BJP has no cause for pessimism.