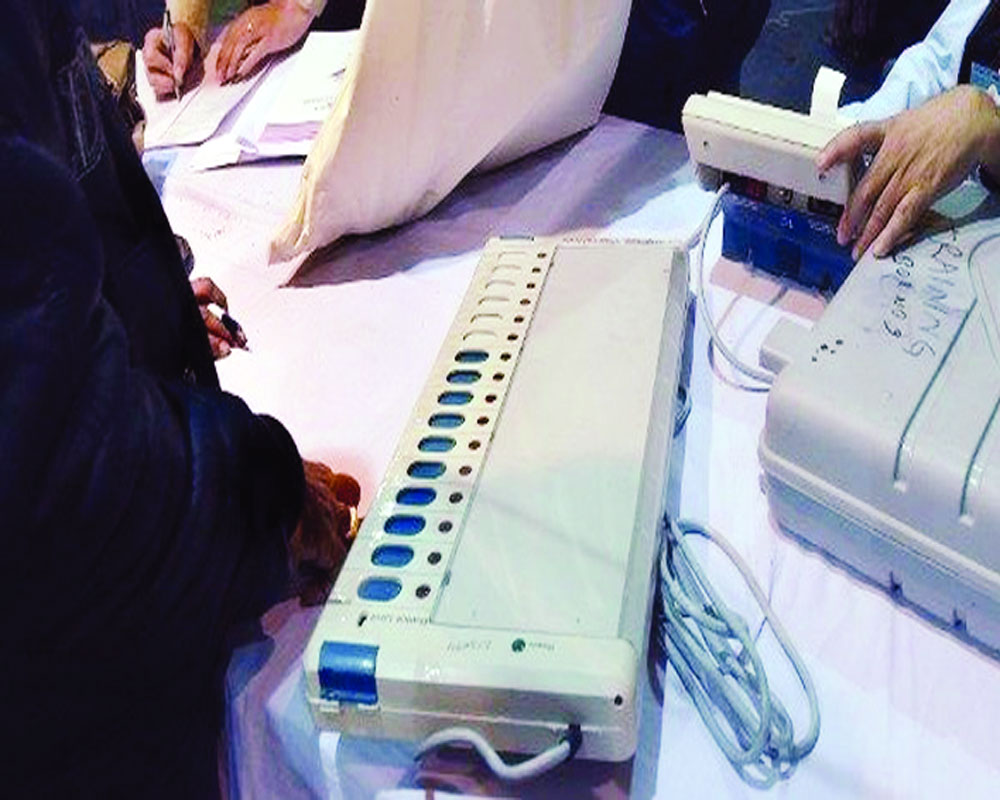 Like the poorly trained handyman always blames his tools, sensing imminent defeat, the election cartel formed by Opposition parties has begun to raise the bogey of EVMs

The concern expressed by Opposition leaders during West Bengal Chief Minister Mamata Banerjee’s United India Rally in Kolkata on the use of Electronic Voting Machines (EVMs) is not only perplexing but confusing as well. The Opposition is so serious about the misuse of these poll devices that it has appointed a four-member panel comprising Abhishek Manu Singhvi of the Congress, Akhilesh Yadav of the Samajwadi Party, Satish Misra of the Bahujan Samaj Party and Delhi Chief Minister Arvind Kejriwal to make a case for the Election Commission of India for wider use of voter-verified paper audit trails (VVPATs) and campaign against the malfunctioning of EVMs. While many Opposition leaders have raised the issue of the trustworthiness of these machines,  the loudest of them came from none other than National Conference (NC) chief Farooq Abdullah, who has earned the reputation of being one who “changes colour with each season” and is hardly even taken seriously by the voters. “The EVM is a chor (thief) machine. Honestly speaking, it is so. Its use must be ended,” he thundered at the above-mentioned rally.

However, the Chief Election Commissioner Sunil Arora was very critical of the claims by the Opposition parties and blamed them for treating EVMs like a “football” by using them as an alibi for their poor electoral performances. He further emphasised that the EVMs were foolproof as far as fears of manipulation were concerned. According to his predecessor, OP Rawat, political parties only question the EVMs when they lose the elections. “Generally this has been the trend. When they win, they don’t give credit to EVMs but when they lose, they blame the EVMs,” Rawat had said.

Though Opposition parties have formed an election cartel in the form of a mahagathbandhan, they are not sure of victory in the impending 2019 general election. Hence, they are trying to create a public perception about the EVMs by stating that they can be easily hacked and, hence, misused by the ruling party. In doing so, they are not only casting aspersions on the independent functioning of the Election Commission but also creating an adverse international opinion about Indian democracy. They are also casting doubts on the nation’s judicial system since numerous courts, including the Supreme Court, have ruled in favour of the fairness of elections conducted with EVMs. The reality is that Opposition  unity is not guided by any ideological glue but the urge to survive. It is somewhat similar to the Panchtantra story about animals of all hues, who formed the cartel against the king of the jungle, the lion.

There are inherent contradictions among the mahagathbandhan, which the people of this country understand because similar endeavours in the past have proved disastrous and weakened our nation and its well-defined institutions. Our country can ill-afford to hand over its reins to ambitious regional satraps, whose vision is limited to vote-banks in their respective States, and for whom, national interests or a nation’s economy is only secondary to their regional interests. Ironically, the Congress is willing to play a second fiddle because it sees no future in the coming elections. Like the poorly trained handyman always blames his tools, the election cartel formed by regional parties, sensing imminent defeat, has begun to raise the bogey of EVMs.

It would be interesting to note that EVMs were introduced in India by the Congress Government in 1982 for a by-election in Kerala and were used for the first time in the State of Goa during the 1999 election, which was won by the Congress handsomely. The 2004 Lok Sabha election was held using only the EVMs and with their introduction, chances of rigging through booth capturing, that had been mastered by the Congress to remain in power, were minimised. Though the Congress won the 2004 and 2009 general elections, it failed to gain absolute majority of its own and had to opt for alliances to form the Government. But the grand old party made no noise since it was able to form the Government on both occasions. The popularity of the Congress plummeted to an all-time low in 2014 and it started to blame the EVMs for its electoral loss thereafter. The Modi wave, which swamped the nation like a tsunami, swept away the regional parties as well, who like the Congress, began to blame EVMs.

Isn’t it perplexing that the party, which introduced the EVMs and hailed them as the biggest electoral reform, found nothing wrong with them till 2014, when all of a sudden it became their biggest critic? The reason is obvious. As long as the going was good, everything was hunky dory but unable to swallow the disgraceful defeat of 2014 and the subsequent State elections, it started blaming the EVMs rather than respecting the peoples’ verdict gracefully. The Congress saw a glimmer of hope when it managed to win the election in the three BJP-ruled States towards the end of 2018. However, a detailed analysis of the polls revealed that the BJP’s loss was not due to a popular vote shift towards the Congress but due to the provision of NOTA (None of the Above). Unsure of the NOTA coming to its rescue once again in the 2019 general election, the Congress continued with its tirade against EVMs.

Closer home, it is not surprising that Abdullah is now making loud noises against EVMs. He knows that his party has been exposed so badly that it stands no chance of returning to power if free and fair election is held. He doesn’t want to be held responsible for the decline and subsequent demise of the Abdullah dynasty in Kashmir. He wants the State to return to those days when his father, Sheikh Mohammed Abdullah, had pioneered the art of rigging elections since he wanted Jammu & Kashmir to be a “single party State” and abhorred the Opposition. Beginning in 1951, the NC and later its converted avtaar, the Congress, depended on rigged elections to remain in power.

The introduction of EVMs reversed the trend and sounded the bugle for NC’s decline. Unprecedented rigging by Abdullah and his alliance partner, the Congress, is considered as the raison d’etre for eruption of militancy in the State. Incidentally, Mufti Mohammad Syed, former Chief Minister and father of Mehbooba Mufti, was the Congress’ boss in the State. Wish EVMs had been introduced in 1987. The State would have been saved from the vagaries of ongoing militancy and a Pakistan-sponsored proxy war since Abdullah and Co would not have been able to rig the elections.

To ensure free and fair elections in Jammu and Kashmir, the NDA Government, under Atal Bihari Vajpayee, introduced EVMs in the 2002 Assembly elections. The NC got a rude shock when its seat share declined to just 28 from 57. Its vote share nosedived in every subsequent election. In 2008, its seat share remained unchanged but it managed to form the Government with the Congress’ support. Surprisingly, neither NC nor Congress found anything wrong with the EVMs though hey failed to read the growing unpopularity among the voters. In 2014, both NC and Congress were decimated but still they did not blame the EVMs.

Abdullah won a parliamentary election in 2017, polling seven per cent votes. Till then everything was fine. However, the conduct of the local bodies and panchayat elections in the State threw up an unpleasant surprise and Abdullah woke from a deep slumber. He realised that his party had lost its mass base and was no longer acceptable to the people of Jammu and Kashmir, particularly Kashmiris, its core constituency. It is this awakening that prompted Abdullah to term the EVMs as “chor machines.” Incidentally, Abdullah is under a wrong impression that voting with postal ballots will win back the mandate for his party. Kashmiris will not allow him to re-enact 1987.

Sensing the nation’s mood, Opposition parties are disheartened but are pretending to put up a bold effort with slogans like jo garajte hain who baraste nahi. People know that loud noises carry no meaning. They will just help them save their skins as most leaders are faced with judicial proceedings for corruption and misuse of authority. The electorate has matured over the years to not be misled by fake campaigns launched by them. Their defeat in the forthcoming elections is a foregone conclusion and, hence, they are preparing ground to justify their defeat by blaming the EVMs. Whether the machine is chor  or their niyat (intent), only time will tell. In a democracy, people are the ultimate deciders.

(The author is a Jammu-based political commentator and strategic analyst. The views expressed are entirely personal)