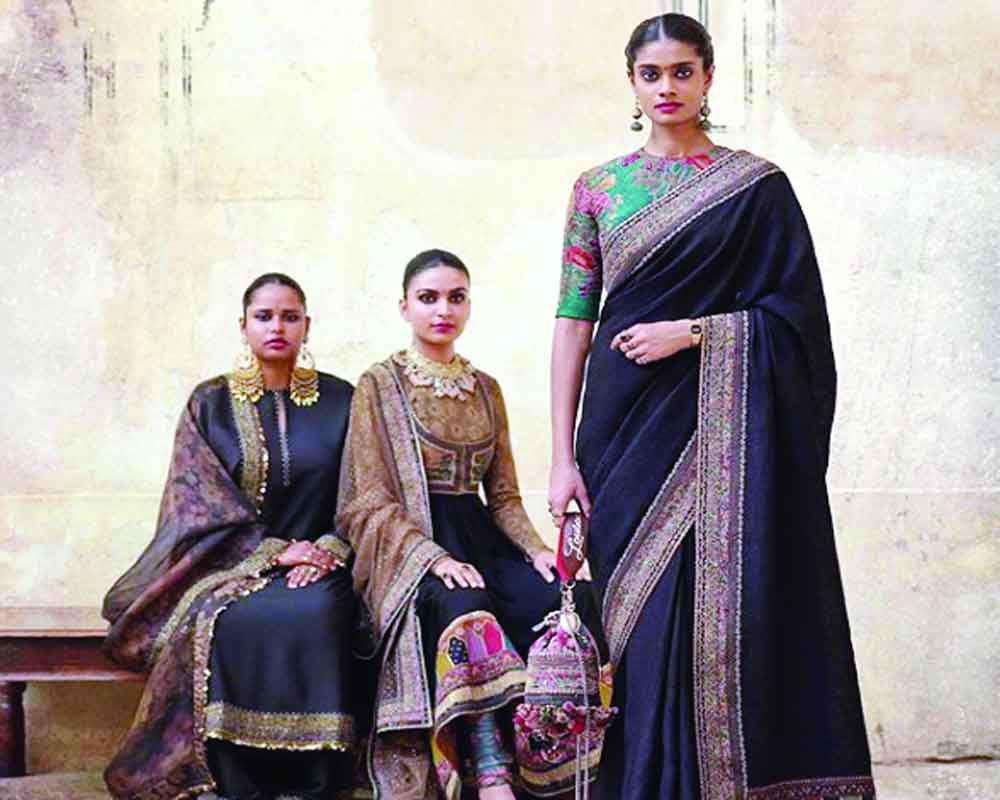 India’s new fashion mantra is not about ethnocentrism or muscularity. But yes, it is robust, meaningful and confident

A few days ago, a mass men’s label launched the Nehru jacket as an assembly line product, as regular as corporate wear, and not an ethnic fancy meant for festive or ceremonial rituals. This signals a shift from the formal code of the Western suit as the only boardroom qualifier and legitimises the ethnic identity as an equally driven negotiator. Latest brand campaigns of other labels show the young flaunting ethnic wear unabashedly and one significant advertisement has designer Manish Malhotra, the man who set the grammar of popular fashion through the porous matrix of Hindi films, advising a young woman on how to wash the zari in the traditional silks and saris that she has proudly stacked up in her wardrobe. The assumption is clearly of these not being just occasion wear or a one-time statement but meant to be worn regularly and, therefore, frequently washed at home. This attribute of everydayness is freeing up Indian fashion from the dictates that we have so long assumed as a given.

For long, fashion has been the most visible barometer of anthropological studies. And by that measure, India’s millennial story is to be found in what we wear, rather how we live our mindset. One that has come full circle after liberalisation and opened us to the world. Post-WTO, there was a rush to co-opt a Western standard of brand consciousness and grammar. And no matter what the unease or inhibition, there was a willingness to engage with the currency of globalisation, even open acceptance of it. There was a McDonaldisation process as well that brought us out of our stiffness and made casual Friday dressing a linking code of behaviour, both in formal and informal spaces. The open democracy and gender neutrality of the casual wear market had a lasting social consequence, that of looking good everyday and being comfortable in a crowd. The exposure to refined silhouettes and minimalism of boutique fashion houses meant that we could structure our appearances better. It further meant that we could define the global Indian by what s/he wore and the accessories s/he carried; the tags  could be identified anywhere. It was also the time when our designers sought international collaborations, using the luxurious heritage of our craftsmanship, to lend some accents to the ramps in New York, Milan and London.

Post-1990s, we were taking strides to be at one with the world. Almost three decades on, we are a significant player, our new-found politico-economical heft giving us the confidence to own our cultural identity. That’s why Banaras is not just about saris but has emerged as a concept and motif of one of our many identity markers. We have co-opted Western structures and silhouettes to the extent of blending them with our sensibility and becoming the Indian-global rather than the global Indian. Fashion today also has finally broken through the Western concept of seasonality of spring-summer and fall-winter and decided its own timeline. Free-flowing drapes are in, khadi is in the middle of an evolutionary explosion and the kurta-churidaar-wasitcoast ensemble has become the most androgynous and modernist statement there is. Our designers, too, now see a potential in the domestic market and instead of international collaborations, are taking their craftsmanship to high streets in fashion capitals of the world, choosing to be an ethnic Indian label that is not just about identity but about philosophy, of handmade skills and originality, sustainability, vibrancy, colour and people. In the neo-Indian assertion of why the world ought to be at our feet, we are literally wearing it on our sleeves. And doing so with a refined sense of style that has finally taught us how fusion ought to be, a cultural memory blended with functional grammar, the deep-rooted knowledge of both now defining our body consciousness.

According to a study by Technopak, India’s ethnic wear industry is expected to grow to Rs  1,26,210 crore at the end of this fiscal, 83 per cent of it in women’s wear. A survey by clothing brand Biba showed  that ethnic wear is a preferred outfit for women aged between 16 to 50 years, particularly in Tier II and Tier III cities.

This is significant since it reflects the empowerment of women in the social, economic and political space and their emergence as a sizeable chunk of the market. It also points to their greater buying capacity by virtue of their increased participation in the workforce. Particularly in the boardroom, where the woman had to be seen mannish in every aspect, be it in approach or power dressing to break the glass ceiling, the rules of appearance have changed completely. Women are keeping to their traditional preferences and body types with different cuts and drapes. The salwars have transformed to palazzos and long-flowing skirts, the embellishment streaks through short kurtis, the anarkali is becoming an asymmetrical cape, the kurtas are now long floor-length dresses while saris are being structured as cocktail gowns. Fusion wear, in fact, is now about day, casual and even evening wear. The Indo-Western genre has emerged as a good option for the youth who may still want the cool quotient of the university jeans and T-shirt routine and want to look ethnic at the same time.

A new consciousness about  where we come from has meant  a renewed interest in the sari, fabrics and our metals. Online sari-wearing challenges have translated into a revivalist search of the diversity of fabric and design and a rediscovery of cotton. This has helped designers and cooperatives rescue weaving clusters and organise the local market. India’s metal and mineral wealth has also fuelled a demand for tribal jewellery as standout avant-garde statements. The comfort with drapes and flowing lines has been directly proportional to a greater embrace of “otherness”, be it of the LGBTQ community or even men themselves, who have been strait jacketed so far by colonialism but are now at home with civilisational logic in sartorial choices, that we need to use organic and breathable fabrics and feel light and easy in a tropical land. Fluidity is in.

Fashion then has become the most accurate reflection of the empowerment of the mind beyond causes or politics. In fact, it has become a tapestry of our neo-consciousness. One that is proud of expressing personal experiences and narratives, localised contexts, embroidery and fabrics (like Bhagalpur silk and Assam muga) and even architectural motifs from our heritage sites and structures.

Of course, in climate challenged times, matching India’s initiatives in environment politics, Indian fashion has emerged as one of the most sustainable choices there is as creators reuse, re-engineer and recycle heirlooms. Be it zero-waste production processes, locally-sourced and woven linen or use of natural dyes, sustainability is gradually becoming the wardrobe mainstay. Particularly, fair-trade practices and the direct sourcing from and benefits to weavers’ and craft clusters have meant that social responsibility is dominating popular choice. Designers are now working independently with craft clusters, often picking out the under-utilised ones, value-adding to their dead stock and joining hands with other societies/groups that are known for mastering a particular craft. This Gandhian essence of the grassroots, that mirrors the primacy of rural India in the political space, has made our fashion industry truly inclusive in its sense of purpose.

In fact, India’s new fashion mantra is not about ethnocentrism or muscularity. But yes, it is robust, meaningful and confident.