The pulse of Indian agriculture

The pulse of Indian agriculture 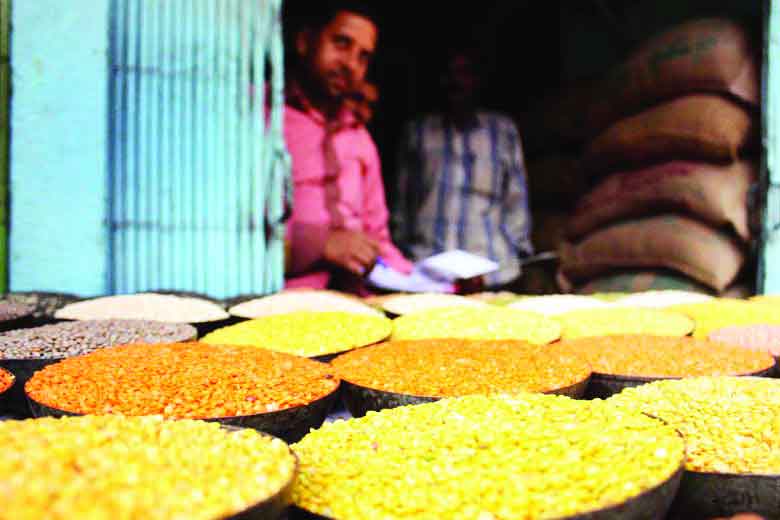 Government policies for the pulses sector have helped overcome multiple challenges. Effective implementation of an integrated module can solve most farm problems

Agricultural transformation is high on everybody’s agenda today. Various stakeholders, including experts, policy-makers and political executives, have expressed their views on how to move forward with agricultural policies so that our farmers can prosper. However, performance of policies and strategies that are already in their implementation stage will provide valuable guidance for the future. It is in this connection that it is imperative to analyse the results of India’s achievements in the pulses sector in the last two to three years that has surprisingly gone unnoticed. The annual production of pulses in India was stagnating at around 15-18 million tonne for several years while its domestic demand increased steadily. In 2015-16, against an estimated domestic demand of 23 million tonne, production stood at 16.35 million tonne. To meet the demand gap, India had to import pulses every year. It can, therefore, be concluded that the earlier policies were not successful in this important sub-sector of agriculture.

Domestic consumption in India forms a substantial share of the global demand. Hence, even a slight variation in the world’s pulses production leads to significant increase in its prices in the domestic market. A similar trend was witnessed in 2015 when there was a sudden spurt in the market prices of pulses, which caused hardships to the consumers and became a matter of serious concern for policy-makers. As an immediate relief, this challenge was met by increasing the import of pulses. But to ensure that such a situation does not arise again, it became necessary to implement a coordinated strategy. Based on the Prime Minister’s directives, the formulation and implementation of this comprehensive strategy was initiated at the level of the Cabinet Secretary. The key aspects of this strategy were to increase production/productivity, provide remunerative prices to the farmers for their produce, strengthen market mechanism and make pulses affordable for the economically and socially backward households.

While the increase in the production of pulses was encouraging, it was also necessary that the farmers, who were engaged in its production, got remunerative prices for sustained growth in income. High production in the absence of a strong price support mechanism can lead to depression of prices and fear of distress sales. Therefore, the Government decided to procure pulses through Central agencies at minimum support price (MSP). For the financial year 2018-19, the MSP of 21 major crops, including pulses, was fixed at one-and-a-half times the weighted cost of production. As a result, the support price of moong, which was Rs 4,600 per quintal in 2014-15, was increased to Rs 6,975 per quintal for 2018-19. Similarly, the price of gram was increased from Rs 3,175 to Rs 4,620; masoor from Rs 3,075 to Rs 4,475; arhar from Rs 4,350 to Rs 5,675; and urad from Rs 4,350 to Rs 5,600 per quintal.

Two positive outcomes are distinctly evident. First, farmers were able to sell their produce at remunerative prices and second, due to the strong buffer stock pulse, consumer prices of pulses have also remained stable and at reasonable levels since 2016.

Sustaining high production of pulses requires a continuous emphasis on ensuring remunerative price to farmers. Keeping this in mind, the Government recently launched a scheme, ‘Pradhan Mantri Annadata Aay Sanrakshan Abhiyan’ (PM-AASHA). Under this scheme, States have been given the option to provide price support to the farmers through procurement of pulses at MSP on behalf of the Union Government. Central agencies will be able to procure up to 25 per cent of the total estimated production. Necessary provisions for budget and Government guarantees have been made for this purpose.

States of Maharashtra, Madhya Pradesh, Rajasthan, Uttar Pradesh, Haryana, Gujarat, Odisha, Tamil Nadu, Karnataka, Telangana and Andhra Pradesh have started procurement of pulses under this scheme. In view of the encouraging production of pulses, the trade policy has also been oriented to encourage exports. A high production, coupled with successful procurement, will lead to the building up of stock of pulses. It was decided that while maintaining the minimum buffer required for price stability, the balance stock will be released to the States to be distributed under various welfare programmes run by the Government. The States have been given the option to distribute pulses at subsidised rates through welfare schemes, such as mid-day meals operated in primary schools, nutrition under Anganwadi centres and targeted public distribution system. The Union Government has been providing a subsidy of Rs 15/kg for this purpose. States of Maharashtra, Tamil Nadu, Tripura, Himachal Pradesh, Karnataka, Andhra Pradesh, Gujarat, Kerala, Jharkhand, Madhya Pradesh and Chhattisgarh have decided to distribute pulses at subsidised rates.

This initiative will also contribute in achieving nutritional security and prevent malnutrition-based trends like stunting and wasting. The multiple challenges of attaining self-reliance in pulses, providing MSP to the farmers, stabilising consumer prices and providing pulses at affordable/subsidised rates to the socio-economically weak families are being met through this coordinated strategy. The case described above illustrates how an effective implementation of an integrated policy can solve multiple problems.

(The writer is Additional Secretary, Ministry of Agriculture and Farmers’ Welfare)