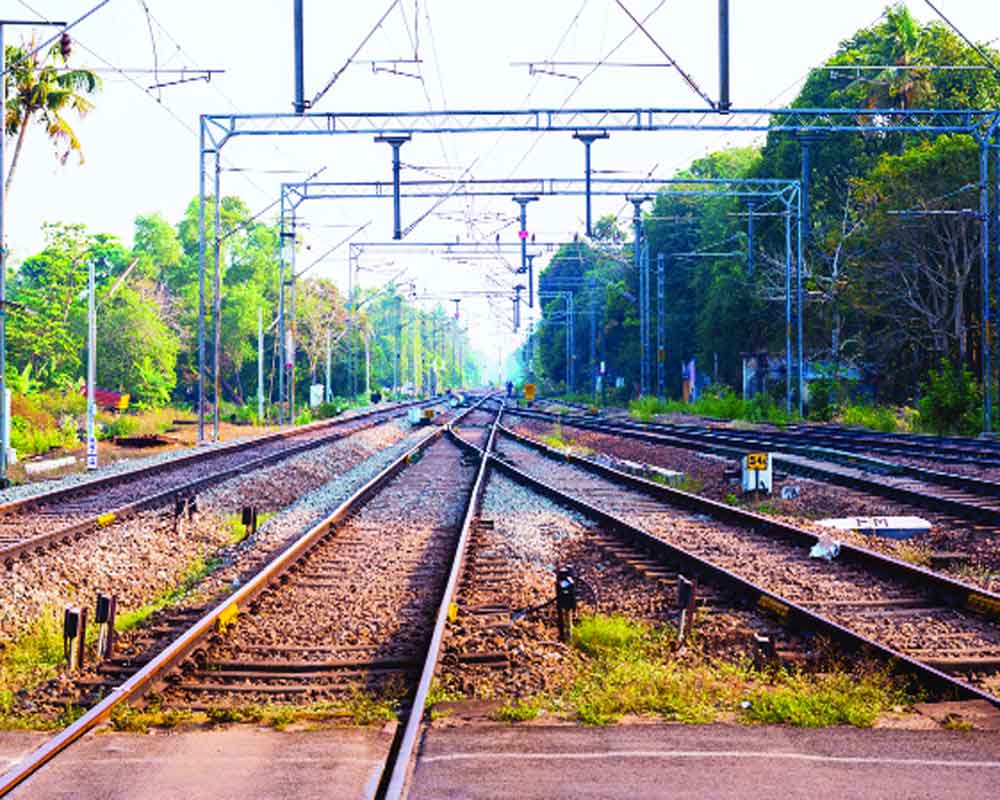 With more than half of the electricity being generated from coal, we may end up burning this dirty fuel in power plants rather than in the furnace of engines as previously thought

Cent per cent electrification of broad gauge, which comprises over 90 per cent of the network, is on the Indian Railways’ agenda. The goal, however, is not as closer as it is projected. “Electrification of the remaining length of the network” is the refrain used to describe the project. But the “remaining” portion is not even in the range of 10, 20 or 30 per cent. The aggregate length of railroads being 67,368 km, the electrified length is only 30,212 km; whereas unelectrified portion is 37,156 km (Lok Sabha unstarred question no: 1351, dated July 25, 2018). In other words, the electrified section of the network is not more than 45 per cent, whereas the unelectrified part is 55 per cent.

Why has the pace of electrification been excruciatingly slow in our country? The first electric train in India ran between Victoria Terminus (now Chhatrapati Shivaji Terminus) and Kurla on Harbour Line in Mumbai (then Bombay) on February 3, 1925. By March  1928, the suburban railway of Bombay (then Mumbai) had been completely electrified. But this early success of the mega city was not extended to whole of India. Until the time of independence in 1947, not more than 388 km of railroad had been electrified, which constituted even less than half a per cent of the network. Until 1980s, the pace of electrification was slow and uneven.

Reason for this is not too far to seek. India was deficient in electricity with competing claims on this scarce resource.  On the other hand, proven reserves of coal were in abundance. Electrification involved raising heavy engineering works, which implied high capital expenditure. It also involved using electric locomotives, which was not manufactured in our country. India had developed the technology for manufacturing steam locomotive since 1862 (when Jamalpur Locomotive Workshop was commissioned by the British). The establishment of Chittaranjan Locomotive Works in 1950 in West Bengal resulted in the manufacturing of modern steam engines. There was, thus, little incentive to electrify.

When steam locomotives started losing dominance in the mid-1980s, the vacated ground was occupied by diesel engines, not electricity. Choosing diesel obviated the need for raising heavy engineering work, necessary for electrification of the route. Electricity has come a long way since then indeed but the balance is still titled, even if slightly, in favour of diesel locomotives.

By the end of 2017, there were 5,868 diesel locomotives on broad gauge as against 5,590 electric locomotives. The numbers correspond, fairly, though not exactly, to the length of route electrified and still unelectrified. There are, however, certain railway zones which had been electrified the least. They are the North East Frontier, North Western and South Western railways, where electric locomotives are altogether absent. These are either due to their terrain types or environmental factors.

The drive towards complete electrification is a mid-course correction of the Modi Government. Even by the end of 2017, the Government had plans to procure 1,107 diesel locomotives for broad gauge and 25 for narrow gauge lines (vide Lok Sabha unstarred question no: 831, dated December 20, 2017). The contract agreement between the Indian Railways and GE Diesel Locomotive Private Limited, for the establishment of a diesel locomotive factory at Marhowra, Saran district, Bihar was signed by the Modi Government on November 30, 2015. On the same day, another contract agreement was signed between the Indian Railways and Alstom Manufacturing India Private Limited for the establishment of an electric locomotive factory at Madhepura in Bihar.

Would their locomotives be absorbed if, in principle, diesel was to be phased out as a dirty and expensive fuel? The Government decided to convert the entire fleet of diesel engines into electric ones. Technologically, this is eminently possible because there are not vast differences in internal workings. As against common misconception, a diesel locomotive does not burn fuel in internal combustion engine. Instead converts it first into electric energy. This makes a diesel locomotive far more energy-efficient than a diesel automobile.

The projected benefits of railway electrification are numerous. It will lead to an approximate saving of `13,000 crore in fuel bill, rid the railways of using 2.8 billion litre of imported diesel, speed up passenger and goods traffic, lend freedom to tap energy from renewable energy sources and curtail the carbon footprint. But are we overlooking a huge cost to the environment by complete electrification?

Around 54 per cent of electricity in India is still derived from coal, which is the major competent of thermal energy in our country. Other components are gas, lignite and oil. The railways may be replacing diesel with, figuratively speaking, coal. Instead of burning the coal in the furnace of an engine, as previously, we would be burning it in thermal power plants.

Does this really provide any relief for the environment? It is true that one-fifth of India’s energy is nowadays produced from new and renewable sources like solar and wind among others. But there is a long way to go before renewable energy can be harnessed for high-voltage railway traction. At present, its use in the railways is limited to power bulbs and fans.

As per the Indian Railway Year Book (2016-17), coal constitutes 48 per cent of its bulk cargo. Of the cargo traffic, 22 per cent is that coal, which is transported from collieries to power plants. If demand for coal increases to meet electricity supply for the Indian Railways, there is a fear that the tracks can get choked. While diesel is supplied through underground pipe nowadays, transporting coal will require mobilisation of more railway wagons. This may become self-defeatist for the Indian Railways.

Further, using only one kind of energy has certain security implications. Hacking of the grid, in a highly digitised world, can bring trains across a region to a standstill. The use of an energy basket will be a better choice.

(The writer is an independent researcher based in New Delhi; views expressed herein are his personal)