The right thing to do

The right thing to do 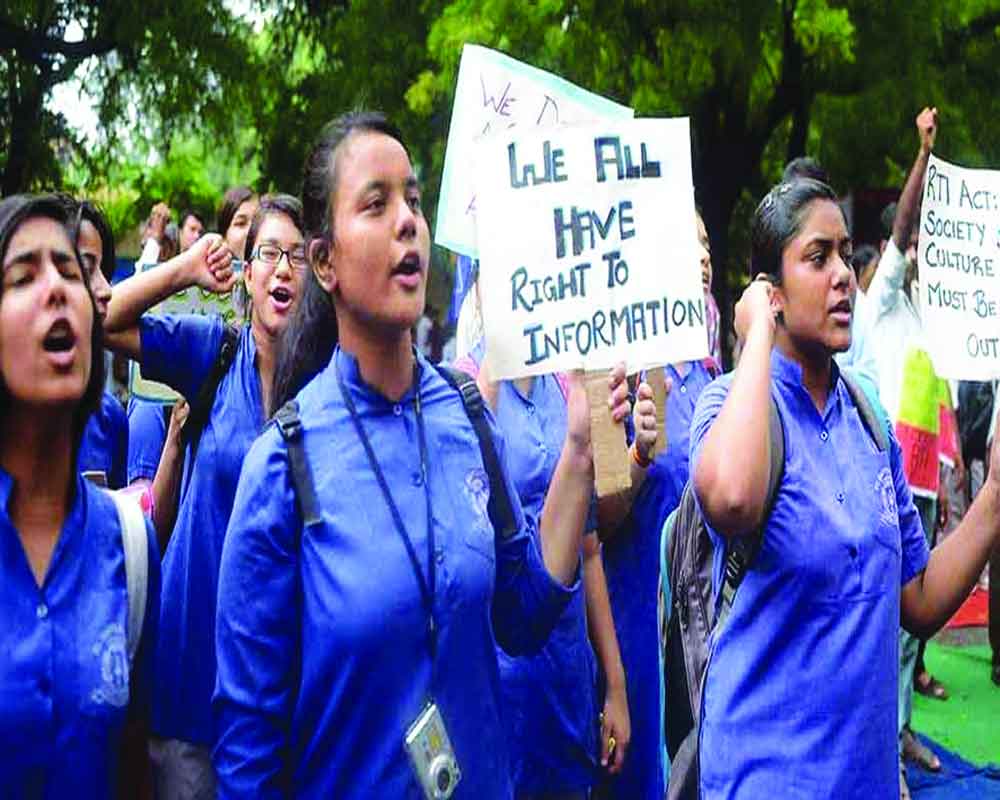 The  SC’s historic order, bringing the Chief Justice of India’s office under the ambit of the Right To Information Act, strengthened it and increased the scope for ushering in more transparency

A five-member Constitution Bench of the Supreme Court (SC), headed by the Chief Justice of India (CJI), has given a landmark verdict bringing the office of the CJI under the RTI Act. This ruling, delivered by the SC after dismissing an appeal by its own Central Public Information Officer (CPIO), added yet another milestone in an era requiring transparency. The judgment, coupled with another recent verdict by the apex court dated September 17, declaring the DAV College Trust and Management Society a public authority under the RTI Act because of substantial Government funding, will have far-reaching positive implications.

The order  set a precedent for bringing many such bodies under the purview of the RTI Act, something that they have been resisting for long. Some well-deserving cases are listed below:

NDDB subsidiaries: Earlier, the Central Government in a reply in the Parliament revealed that it had advised the National Dairy Development Board (NDDB) to abide by the Central Information Commission’s (CICs) April 15, 2011 decision, that was upheld by single-Bench of the Delhi High Court (HC), to bring Mother Dairy under the RTI Act. Mother Dairy has filed an appeal in the Division Bench of the Delhi HC against this.

While all NDDB subsidiaries should be covered under the RTI Act, most people, even public authorities, are unaware of the fact that NDDB has to provide information about all its subsidiaries under Section 2(f) of the RTI Act as it is the regulatory body.

IBPS: The then CIC chief RK Mathur in his verdict noted that the Institute of Banking Personnel Selection (IBPS) is not a public authority under the RTI Act, even though four million candidates appear every year for examinations conducted by it.

IFFCO: The cooperative giant IFFCO gifted prime properties worth hundreds of crores in New Delhi to its office-bearers. Even the Comptroller and Auditor General’s (CAG’s) report pointed out massive irregularities in its functioning.

BCCI: The Board of Control for Cricket in India (BCCI) challenged the CIC’s verdict declaring it as a public authority under the RTI Act at the Madras High Court despite the Union Ministry of Sports supporting the CIC’s verdict. It is noteworthy that even the Law Commission, on being approached by the Centre subsequent to the SC’s directions, was in favour of the BCCI being brought under the purview of the Act.

Land and Building Departments: These Central and State Government departments should study all cases of allotment of land or accommodation at subsidised rates or lease and declare all these as public authorities under the RTI Act. Plus, an undertaking should be taken from them in this regard.

Tightening scope of Section 8(1)(j) of the Act:

The SC, in its November 13 verdict, has laid down important principles for tightening the scope of Section 8(1)(j) of the Act regarding personal information. Undoubtedly, like all other legislations, the RTI Act is also being misused because of which the apex court had to be so elaborative. But principles laid down there should have been applicable to other wings of the democratic system also, rather than just the judicial system. For example, the verdict restricts misuse through surveillance only for the functioning of the judiciary. While all the public authorities, especially sensitive ones like the President’s Secretariat, the Prime Minister’s Office and ministries of Defence and External Affairs may also be facing misuse of the RTI Act for surveillance.

Fee uniformity fee can prevent misuse: Misuse of the RTI Act has become a big challenge for which the Centre can issue notifications without amending the legislation. Sections 27 and 28 of the RTI Act give power to competent authorities and State Governments to draft their own rules, which include fixing of RTI fee and mode of payment. Several competent authorities and States misused their power by charging high fees arbitrarily, aimed at discouraging its use. Several States also fixed a fee for filing first appeals. However, the SC in its verdict on a petition filed by Common Cause capped the fee at `50. India should be governed with the principle of “one nation, one rule” at least in respect of RTI fee and its mode of payment.

Make ID proof compulsory: The Railway Board has made it compulsory to attach ID proof with the RTI applications to curb fake pleas being filed in the name of others. The Department of Personnel and Training (DoPT) should issue a circular which makes ID proof compulsory with every RTI application, First Appeal and Second Appeal or complaint filed with Information Commissions. Odisha has already adopted this and those who do not want to disclose their identity can file applications through a post-box.

There is no logic in some NGOs and RTI activists opposing the move for attaching ID proof on the plea that the identity of applicants would be exposed. The identity as it is gets disclosed through the names and addresses given on the applications. ID proof is just a way to ensure the genuineness of the applicant. This will also prevent foreigners from filing applications because the RTI Act, 2005 is meant for Indian citizens only. In the absence of ID proof, authorities cannot distinguish between citizens, people of Indian origin and  those who have taken the nationality of other nations.

Need for RTI stamps: With public departments going totally cashless, many of them, like the National Green Tribunal (NGT) have stopped accepting money and are asking RTI applicants to enclose postal orders of `10 for the fee. Many post offices do not sell postal orders, while others, including the Head Post Office at Parliament Street, restrict the sale of postal orders till 4 pm, inconveniencing people. Plus, most public authorities require postal orders in different names even though the DoPT requires postal orders towards RTI payments to be in the name of accounts officer only, complicating matters further.

So, the best remedy is to accept the CIC’s recommendation that the postal department issue special RTI stamps (like the ones issued earlier for payment of licence fee of radio and TV sets) in denominations of `2, `10 and `50. These stamps should be made available not just at post offices and Government departments but also at other convenient sale points.

Auto-emailing of responses for applications filed online: The portal for filing online applications should be modified so that RTI responses and orders of First Appellate Authorities may be auto-emailed. This will save the applicants the trouble of going to the portal to view responses. SMS alerts regarding the emailing of the responses must also be sent.

Immediate repeal of Delhi RTI, 2001: This is in reference to an order in the Anil Dutt Sharma versus Government of NCT Delhi case, wherein the court has mentioned that the RTI Act, 2005 would override the Delhi RTI Act, 2001 (DRTI Act) as it would occupy the entire legislative field.

The demand to repeal the meaningless DRTI Act is being made as it has lost all relevance now given the 2005 Act and only a few applications are being filed under it. In fact, most Delhi Government officers are totally unaware of its provisions and the infrastructure set up to handle applications is a complete waste of precious public resources. Hopefully, the powers that be will take cognisance of this.

(The writer is a noted RTI activist and consultant)