The stellar logic of Kumbh

The stellar logic of Kumbh 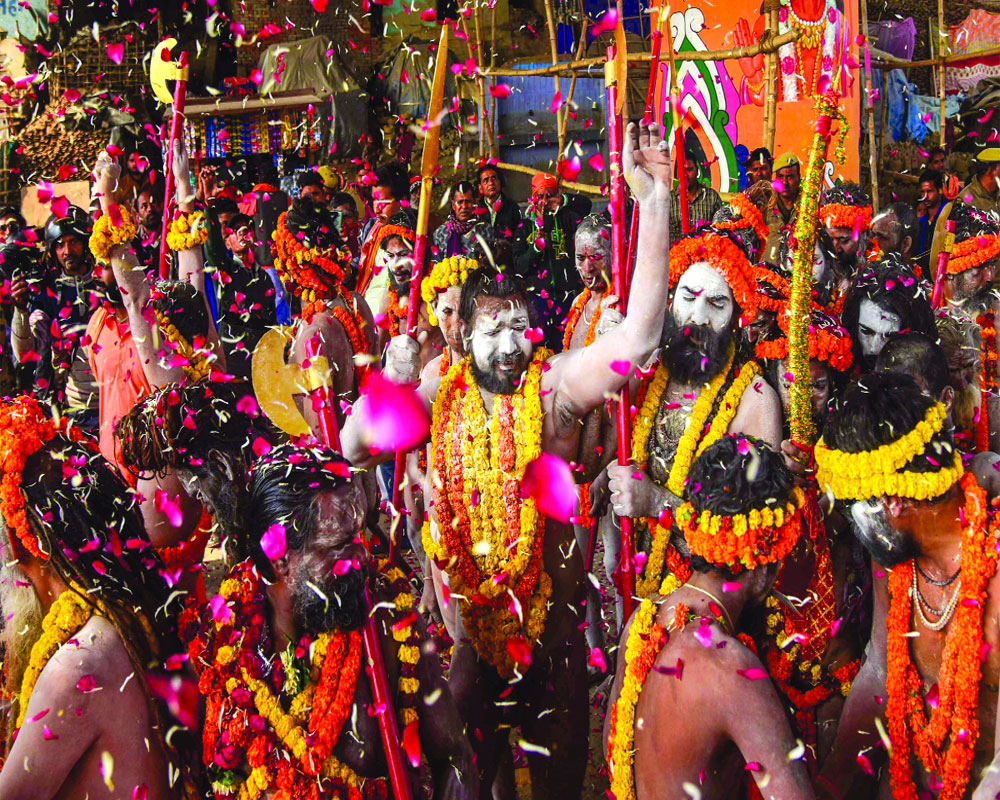 A perusal of the official website of Kumbh Mela, 2019 — hosted by the Prayagraj Mela Pradhikaran, Uttar Pradesh — reveals why this is not a kumbh at all. It mentioned two celestial alignments under which Kumbh can be held in Prayagraj (Allahabad). These are: a) When Jupiter enters the Aries constellation and the Sun and the Moon are in Capricorn constellation, the Kumbh festival is held at Prayagraj on the new moon day and b) When the Sun is in Capricorn and Jupiter moves in to Taurus, the Kumbh festival is held at Prayagraj.

Jupiter is nowhere close to either Aries, let alone Taurus at present. The bulky planet is residing in Scorpio (vrischik raashi) since October 11, 2018, and will move into Sagittarius (dhanu raashi) on March 30, 2019, seven-and-a-half months ahead of its usual residency period of 13 months in one sign. Throughout the year, it will travel back and forth between Scorpio and Sagittarius several times — an uncommon though not impossible phenomenon when a planet’s motion along its orbit is observed from the Earth against the backdrop of constellations.

Critics were quick to point out that the Kumbh Mela was organised in erstwhile Allahabad (Prayagraj) as recently as 2013. That was the time when Jupiter was residing in Taurus. The 2019 mela should, thus, be called Ardha Kumbh. But the Yogi Adityanath Government in Uttar Pradesh, in an image-building exercise, went overboard to describe it as Kumbh. Exhibitory Hinduism is not without its drawback. Ardh Kumbh no doubt is as conventional as Kumbh itself. However, on a theoretical premise, it militates against the concept of Kumbha Yoga. Either a planetary position exists, or it does not. Jupiter in Scorpio is Jupiter in Scorpio. It cannot be expressed in terms of half or one-fourth of Jupiter in Taurus or Aries.

The Kumbh Mela is held at four different locations in India viz, Haridwar, Prayagraj (Allahabad), Ujjain and Nasik, under four different kinds of planetary combinations. Their time is determined mostly by the position of planet Jupiter and Sun in different constellations. The name Kumbh is derived from the sign of Aquarius (kumbha raashi). But against popular misconception, no planet needs to be positioned in that sign for the mela to take place, except in the case of Haridwar.

The beginning of Kumbh or Ardha Kumbh  2019 coincides with Makar Sankranti. It refers to transition of the Sun into the sign of Capricorn (makar raashi). The event recurs annually since the Sun transits across the entire zodiac band once every year, residing in one sign for a month. Makar Sankranti is celebrated with fervour across India, marked by holy dip in rivers, including the Ganga and water bodies. Since the solar calendars in India are actually sidereal rather than tropical, the month’s beginning is marked by the entry of the Sun in a new zodiac sign. The transit point from one to the other is called Sankranti.

Traditional calendars used in eastern and southern parts of India are mostly solar. Those used in northern and western parts are mostly luni-solar ie lunar calendar with provision for an intercalary month (adhi-masa) to bring it at par with solar year. A luni-solar calendar like Vikram Samvat treats the months as sacrosanct but the year length as incidental. The months are coeval with lunation — from Shukla Pratipada to Amavasya. In sidereal solar calendars, months are as important as the year. The month changes as the Sun goes over each of the 12 divisions of the zodiac.

The Gregorian calendar, by contrast, is tropical by nature. The extent of the natural year, in a diagrammatic representation, is coeval with greatest limits of the Sun’s declination in the North and the South. These are Tropic of Cancer (230 26’12.5”N) in the North and the Tropic of Capricorn (230 26’12.5”S) in the South where the Sun is directly overhead on June 21 and December 22, respectively. For the northern hemisphere, the date June 21 is summer solstice, signifying the longest day and December 22 is winter solstice, signifying the shortest day. They are reversed, like the seasonal cycle itself, in the southern hemisphere. The days and nights are equal (Equinox) on March 21 and September 21 when the Sun is overhead at noon on the Equator. The Gregorian calendar functions without any reference to zodiacal background or phases of the moon. The two solstices and two equinoxes — all of them astronomical events — form the four pillars of the calendar. The proof of the calendar being in order is that these events should correspond to dates specified for them.

The Julian calendar (estd, 45 BC) had to be corrected by Pope Gregory XIII in 1582 AD by — dropping 10 days — because the Spring Equinox had gradually crawled up to March 11 (same with two Solstices) over a millennium and a half. The Pope brought in corrective rules of leap year to replace the ones formulated by Julius Caesar. The leap years were dropped from the beginning of the century (00 year) unless the year was perfectly divisible by four. Under the new rules, the Gregorian calendar can go wrong by one day maximum in 5,000 years, a flaw that can be rectified by further dropping of leap years once in 1,000 years.

This forms the point of departure of the Western (now called Gregorian) calendar from the Indian solar calendars. The Hindus have chosen to preserve the (reference to) constellation, whereas the West civilisation the reference to tropics. The entry of the Sun in the constellation of Capricorn (makar raashi) is celebrated as Makar Sankranti which occasions annual Magh Mela and at pre-determined intervals the Kumbh Mela. But what is the significance of Makar Sankranti, that we celebrate it out of 12 possible Sankrantis during a year? This is because it is observed as Uttarayan, when the Sun begins its (half-yearly) northward journey. It is the beginning of the day of gods.

But in reality, the Sun is overhead (at noon) at the southernmost point of tropic on December 22. It begins its northward journey on its apparent path soon afterwards.

It seems plausible that Uttarayan, which is a tropical phenomenon, and Makar Sankranti, which is a sidereal (related to stars or constellation) phenomenon, coincided in time more than 2,000 years ago. It was acceptable to describe them as being synonymous. But gradually, due to axial precession of the earth, they diverged. Thus, today, coinciding Uttarayan and Makar Sankranti implies the calendar is going wrong. This means that the seasons are shifting as per the Indian solar calendar. Restructuring is called for on the lines suggested by Calendar Reforms Committee, 1952.