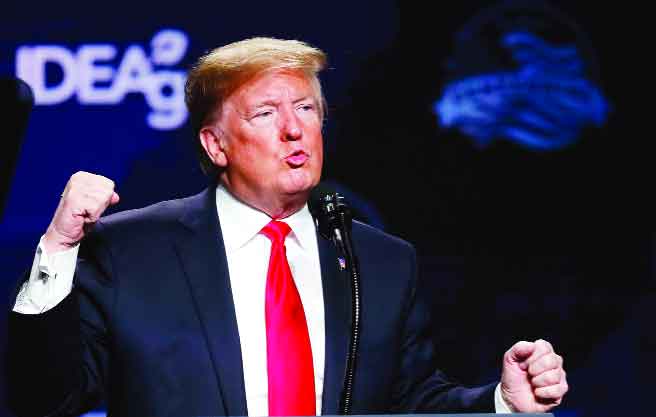 Aesthetically repugnant as he may be, many of the US President’s policies, if he walks the talk, represent an opportunity for India to further its national interest

Of all the speeches, tweets and off-the-cuff remarks which together constitute President Donald J Trump’s articulation of the US’ global policy priorities and ideological positions (or lack thereof), there has never been one that defines his presidency more than his address to the United Nations in end-2017.

It was the most unambiguous speech by a world leader to the globe’s most ambiguous institution in recent history. In a sense, it was a rather effective exercise in showing the mirror to the UN. He started off by putting the cat firmly among the pigeons by reminding the gathering that President Harry S Truman was instrumental in establishing the UN as an organisation specifically for post-WW II nation-states to help build democratic institutions in their respective countries that would strengthen member-states’ sovereignty and help them serve their citizens better.

It was a timely intervention. After all, someone needed to juxtapose what was intended with what the UN has become — a sinecure for the elite of various nations which passes ineffective and often unimplementable resolutions, an illiberal club which has ended up bestowing legal rights to groups at the cost of the individual and an organisation that happily tolerates grotesque aberrations of a Libya or Sudan finding a place on its human rights council, for example.

Trump also laid out his doctrine for America’s place in the world which, over the past year and a bit since his speech, seems to have been broadly accepted by the American establishment though his style of doing things is, perfectly understandably, unacceptable to many, including the simpatico. But let us not confuse style with substance. This doctrine emphatically underlines the supremacy of the nation-state in global interaction and/or cooperation while championing sovereignty, security and prosperity for them individually.

Crucially, he was careful to emphasise the demonstration effect of robust, liberal, democracies even as he iterated that Washington was not in favour of imposing a way of life on others and was accepting of diversity in governance models across the globe which may not albeit be ideal. Where he was explicit was in calling out Iran/Yemen, as corrupt, despotic (Islamist) dictatorships and Cuba/Venezuela as corrupt, totalitarian (Socialist) dictatorships. He did, of course, take a swipe at Russia and China, without naming them, for their expansionist moves in the Ukraine and the South China Sea respectively as well. But there was a qualitative difference in the latter criticism, rooted as it was more in fighting both countries as global power competitors as opposed to the “bogus internationalism” of the so-called Islamist/Socialist countries which are ideologically committed to undermining the global order premised on nation-states or blocs thereof as the primary unit of interaction. (North Korea and Syria, also attacked by Trump, represent proxy threats for the US and are a discussion for elsewhere.)

His definition of such rogue nations as the “wicked few” and his exhortation to “decent nations not to become bystanders” were just sound and fury signifying American strategic interests, so they need not detain us here. But his frontal attack on bogus internationalism and exhortation to all UN member nation-states to put their country first just as he was putting America first provides India the opportunity it needs to recalibrate its own place in the world at a time of geo-strategic flux.

In calling for a renewal of the founding principle of the UN, which is its member-states’ sovereignty, focussing on outcomes not ideology and adhering to what may be termed principled realism, the US, if it continues down this path, has opened up space for India to attempt and secure its strategic interests in a substantial manner. To be facile, all we need is to replace Iran with Pakistan in the countries listed by Trump at the UN and we are good to go! The reality, of course, is more complicated than that; for example, Saudi Arabia should in an ideal world make it to any list of despotic Islamic regimes but it is neither in the US’ nor India’s interest to proffer such a suggestion. The situation, however, is not so complicated as to not provide New Delhi enough leverage to make space for itself at the high table, provided we keep our domestic internal security situation under control, economic growth robust and democratic institutions ticking over despite the odd setback or two. Especially, given Washington’s targeting as articulated by Trump in his UN speech of those nations which support and promote the aims of “Al Qaeda, Hezbollah, Taliban and others”, the last-mentioned presumably keeping the door open for inclusion of terrorist tanzeems operating in the Indian State of Jammu and Kashmir in this list.

Of course, in isolating pseudo-socialist totalitarian regimes and repressive Islamic theocracies — though that does not mean one doesn’t deal with them in one’s national interest even if with a pinched nose — Trump is focussed on US interests; the trick for New Delhi to pull off is to see how far our interests align with Washington’s given this once-in-a-generation opportunity. It is not only about meta-narratives but also the smaller issues on which there is an emerging convergence of views.

For example, Trump was emphatic in telling the UN that pressure by its refugee organisation on the US to allow refugees stateside was in effect dictatorial, chipped away at sovereignty and untenable. At the cost of resettling one refugee in the US, we can help 10 make a better life in their own countries, he said. New Delhi, grappling with similar pressure despite not having the economic wherewithal of the US in regard to, say, accommodating Rohingya refugees, should obviously take note. It is the citizens of low-income neighbouring countries who bear the cost both of refugees fleeing conflict and oppression or plain economic migrants.

US emphasis on result/outcome-orientated global actions, however, does require a fundamental reform of the United Nations itself. That is where the real opportunity for India lies if it can find common ground with the US. For example, given his transactional approach, President Trump has been quick to articulate the long-standing grouse of the American conservative establishment that the US’ contribution to the UN budget is 22 per cent of the total despite the US being just one of the UN’s 193 member-states. But he was quick to add even while encouraging other members to contribute more that the investment was worth it if peace and global order could be delivered. The disproportionate military/financial contribution of the US in terms of the influence it has on the world body is a sentiment India is in a good position to exploit if it is adroit in the steps it needs to take to secure its strategic objectives.

The US President’s paean to the nation-state and advocacy of independent, strong, prosperous countries guiding the UN as the best way to secure peace in our time as opposed to letting far-off, faceless bureaucracies such as the UN have the deciding say is in consonance with the approach of the Indian deep state. It’s better to have people taking ownership of their future rather than be led by a paternalistic global elite that in the name of seeking mutual bliss-points ignores the oppressive nature of the regimes that push this line.

(The writer is an independent journalist and commentator based in New Delhi.)