The unending battle for statehood

The unending battle for statehood 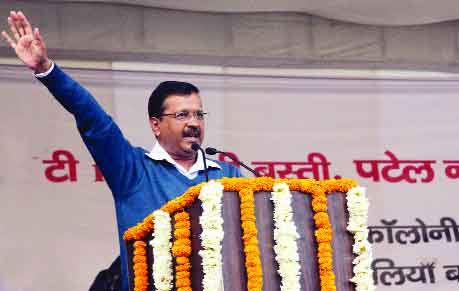 Arvind Kejriwal has, perhaps, chosen a wrong time to press for full statehood for Delhi as wounds of the Pulwama attack have not healed yet. It would be better if he highlights his achievements in health, education and power sectors

Delhi Chief Minister Arvind Kejriwal is back with his old game of street-level confrontation with the Union Government as a part of his political strategy. This time, his indefinite fast — that was supposed to start from March 1, but has been postponed — is to get full statehood for Delhi. Can he achieve this objective? It looks difficult because no party at the Centre wants to give full statehood to Delhi.

In the last two decades, both the BJP and the Congress have promised statehood to the capital city but when they came to power at the Centre, the issue took a backseat. Delhi being a special State, its land and law and order come under the purview of the Union Home Ministry. The Chief Minister wants them under his Government’s control but the Centre will never part with these powers as there are several hiccups — financial and political.

Like West Bengal Chief Minister Mamata Banerjee, Kejriwal is best at confrontational politics. There has been a constant tussle between him and the Centre ever since the Aam Aadmi Party (AAP) Government came to power in 2015. Earlier in his first term, he went on dharna and even held Cabinet meetings near the Rail Bhavan on the pavement.

Last week, Kejriwal declared in the Assembly: “From March 1, I will begin a hunger strike. I am going to fast till we get statehood. I am ready to face death.” The demand was one of the promises made by AAP in the run-up to the 2015 Assembly polls. “Ab aar ya paar ki ladai hai (this is going to be a decisive battle),” the Chief Minister said, announcing his decision. Prior to that, Kejriwal had declared in public meetings that if the AAP got seven out of seven seats in the Delhi Lok Sabha battle, his party would ensure that Delhi got statehood within two years. Kejriwal is also prodding the people of Delhi to come to the streets to participate in the agitation for statehood.

The immediate provocation for this decision was the Supreme Court’s verdict last week, which held that the Centre and not the Delhi Government had the power to order investigations against corrupt officers in the capital. The court also left the decision to a higher Bench as to who should control the officers. Prior to that, in July last year, a five-judge Constitution Bench ruled that Delhi cannot be accorded the status of a State but said the Lieutenant-Governor has no “independent decision-making power” and must act on the “aid and advice” of the elected Government.

Kejriwal is not happy with these judicial pronouncements. Therefore, he is building up this issue as a part of his campaign for the upcoming Lok Sabha poll and also to divert public’s attention from his Government’s failures. He claimed that statehood would provide two lakh jobs in the Delhi Government, pucca houses for every Delhiite, regularisation of contractual Government employees and new schools and universities.

Though Delhi is going for polls in 2020, Kejriwal’s compulsion is to raise the issue now because of the parliamentary polls. AAP has performed well on sectors like health, education, water, electricity and unauthorised colonies and is quite sure of support from the lower middle class and poorer sections but Kejriwal is not sure about prospects in the Lok Sabha poll. What better way than sit in dharna on behalf of the people. This way, he can impress on the people that he is the only one who is taking care of their interests.

Second, Kejriwal may also need a face-saving formula at some point of time later if he continues with the fast. He knows he can expect Banerjee and Andhra Pradesh Chief Minister Chandrababu Naidu, with whom he is on excellent terms, to come to Delhi and persuade him to end the indefinite fast. Are they not together in the proposed mahagathbandhan? He has come much closer to them and this is a part of taking on the Centre. They are all equally interested in embarrassing the Modi Government.

Kejriwal is not the only one fighting the Centre as Puducherry Chief Minister V Narayanasamy, too, has been locked in a turf war with Lt Governor Kiran Bedi over the latter’s negative attitude towards various proposals of his government. He had been sitting in dharna since February 13, outside the Raj Bhavan, demanding that the Lt Governor approve his cabinet’s proposals.

Kejriwal should realise that confrontational politics will not get him anywhere. The country is tense after the Pulwama terror attack and he has chosen a wrong time to press for his demands. What happens if a limited war with Pakistan starts before that? What is important is governance and this is where he is weak though he puts the blame on the Centre for his failures. Pressing for Delhi’s statehood is something that cannot happen in a day. Kejriwal should realise the difficulties on the road to it. As a Chief Minister, his mantra should be governance first.