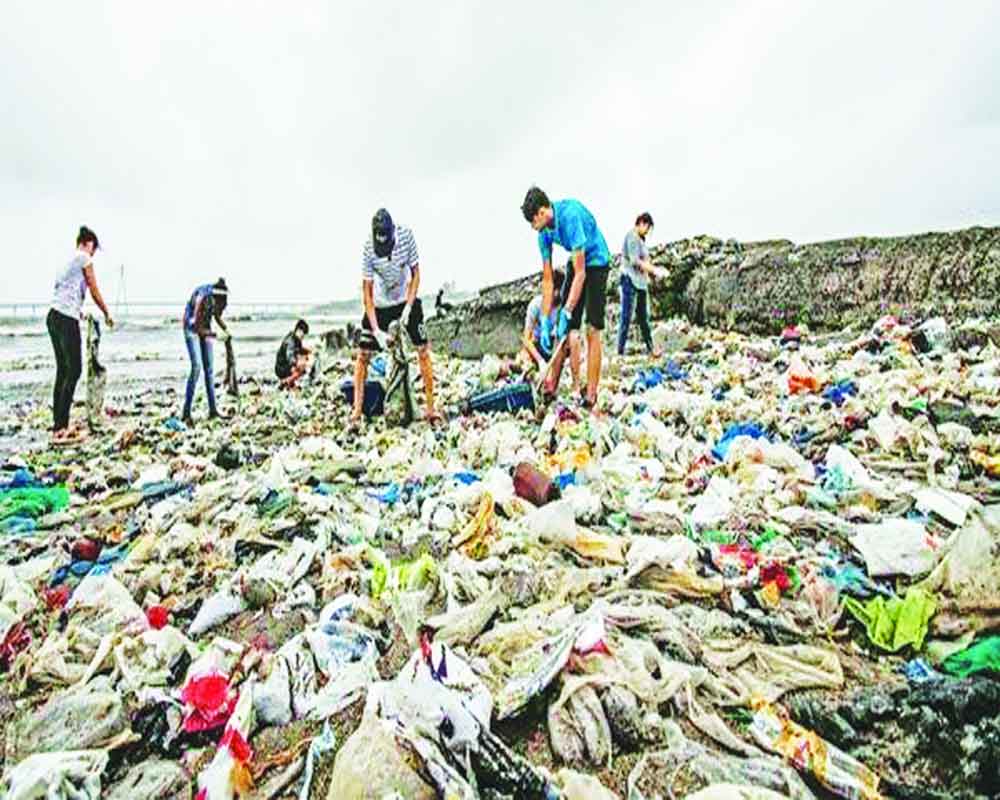 To win the war on single-use plastic, we need not just bans but scientists and entrepreneurs who can make technology a viable tool

Prime Minister Narendra Modi’s call to shun single-use plastic during his Independence Day address, which was reiterated at the 14th Conference of Parties (COP14) of the UN Convention to Combat Desertification (September 9), could fail to tackle the scale of the plastic menace unless scientists and entrepreneurs join the fight. Previously, in April 2011, former Delhi Chief Minister Sheila Dikshit had imposed a blanket ban on the manufacture, sale, storage and use of plastic bags but it soon withered away. In March 2016, the Union Government mooted the Plastic Waste Management Rules, 2016, to ensure that organisers of public functions (rallies, weddings) remove all plastic litter at the venue at the end of the function. It was hardly known among the citizenry.

India generates a staggering 26,000 tonnes of plastic waste daily; there are no reliable statistics about how much is collected and (hopefully) recycled; most probably end up in rivers and landfills. Some have begun to be used in making more sturdy roads.

National Geographic noted that 40 per cent of the plastic produced every year are single-use items like carry bags and food wrappers that are needed for just a few minutes or hours but linger in the environment for hundreds of years. Sometimes additives are used to make plastics stronger and durable, which increases their lifespan. The UN Environment Programme estimates that only nine per cent of all plastic waste is recycled; 12 per cent incinerated and 79 per cent dumped in landfills or the natural environment. Worldwide, plastic pollution has made its way into the oceans, where it is destroying marine life and coral reefs. Research published in Science Advances states that since the 1940s, the amount of microscopic plastics in ocean sediments has doubled every 15 years. In 2010, plastic pollution touched almost 40 particles per 10cm x 10cm patch of the ocean floor. On Henderson Island, an uninhabited atoll halfway between Chile and New Zealand, scientists found plastic items from Russia, the US, Europe, South America, Japan and China, carried by the South Pacific gyre, a circular ocean current.

Every year, nearly 12.7 million kg of plastic enters the oceans and this could double in the next decade, according to Ocean Conservancy. By 2050, almost every seabird on the planet will have plastic in its stomach. Oceans will have more plastic than fish, according to a World Economic Forum report. Plastic nano-particles ingested by marine animals are entering the food chain, affecting fish fertility and food security of coastal populations.

Scientists believe that human beings consume at least 50,000 micro-plastic particles every year, through food and water. The health impact of this intake has not yet been medically assessed but micro-plastics can release toxins that may penetrate body tissues and cause cancer and other afflictions.

India needs solutions now, before plastic pollution unleashes multiple health epidemics like those triggered by the green revolution, which experts are only now beginning to admit. The mega-solution is generating waste-to-electricity, the technology for which exists in countries like Singapore where no waste goes to the landfills or oceans. Strangely, Indian entrepreneurs have not entered this arena, which could be very lucrative. Perhaps the Government could consider asking medium enterprises to enter this field and hire experts to mentor this sunrise industry.

Biological solutions have been found but have not been adopted even on a pilot basis. In April 2017, Spanish scientist Federica Bertocchini accidentally discovered that wax worms eat plastic. The University of Cambridge, the UK, promptly began a study (published in Current Biology) wherein it discovered that the worms can degrade polythene, one of the toughest materials in the world. Waxworms (Galleria mellonella) are caterpillars, commonly used as fishing bait and are readily available. They love beeswax and often attack beehives; possibly they find plastic similar to beeswax; 100 wax worms can biodegrade 92 milligrams of polyethylene in 12 hours. Polyethylene is the most commonly manufactured plastic that is used to make shopping bags and food packaging.

Scholars are now searching for the single enzyme responsible for this chemical process, which, if reproduced largescale, could solve the world’s plastic problem. Indian scientists need to join this quest, especially as plastic retains utility in many areas (medical syringes, IV bags, surgical gloves, packaging, garbage disposal bags and bins among others). Above all, thousands of manufacturing units and lakhs of jobs are at stake, which is why a total ban is nearly impossible. Moreover, the Government must decide if the petrochemical-based shopping bags, which have entered the market in recent years and take the same time to degrade as plastic, should be allowed to aggravate the waste disposal crisis. Alternatives like biodegradable hemp-based or bamboo-based plastic should be promoted.

Previously, Japanese scientists found a bacteria (Ideonella sakainesis 201-F6) that ate polyethylene terephthalate (PET), the plastic used to manufacture disposable water bottles (Science, March 2016). Laboratory tests showed that Ideonella sakainesis uses two enzymes to break down the molecular bonds of PET plastic and consider it as a food source. The scientists believe that this happened because the bacteria were put in a place with only one food source and adapted to consume it, a heartening example of Nature’s resilience.

Recently, in the Greater Noida wetlands, scientists at the Shiv Nadar University discovered two strains of plastic-eating bacteria (Exiguobacterium sibiricum DR11 and Exiguobacterium undae DR14) that can decompose polystyrene, a key ingredient in single-use plastics. Both strains used polystyrene as a carbon source and created biofilms, thus paving the way for its natural degradation. Indian scientists must grow all such bacteria strains to industrial-strength so that small or medium enterprises could degrade plastic waste on a district-wide basis. Such solutions need little space and investment.

Recently, Irish teenager Fionn Ferreira won the Google Science award ($50,000) and funding for a promising invention to remove micro-plastics from water. Ferreira was kayaking when he saw a rock covered in oil from a recent spill, which had attracted tiny pieces of plastic. Using ferro-fluid (a magnetic, oil-based liquid invented by NASA in 1963), Ferreira made a more environment-friendly version with recycled vegetable oil and magnetite powder and removed 88 per cent of the micro-plastics in his test samples. This could eventually be used at wastewater treatment plants to filter micro-plastics before the water is released into rivers or oceans. With technology now offering multiple solutions, we need every one of them.