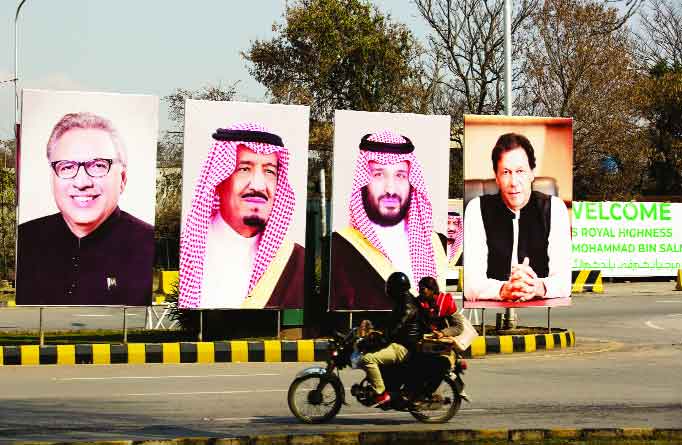 Given Saudi Arabia’s own priorities and strategic roadmap imperatives, Pakistan will remain a preferred ally as long as it does not harm Saudi interests directly

Saudi Crown Prince Mohammad-bin Salman (MbS) is touring the three most important capitals beyond Washington, DC, in his post-Khashoggi phase. The Western capitals were ultimately not amused by MbS’ ingrained feudal instincts in carrying out the rash internal purge, l’affaire Khashoggi and other unwarranted military interventions, after the initial hoopla surrounding the ostensible modernisation drive by the “real power behind the throne.” His initially feted socio-economic promises of “Vision 2030” and steps to liberalise and reform the society were soon undone by reports of increased human rights violations and clumsy interventions in Syria, Yemen and Qatar as also a purported kidnapping of the Lebanese Prime Minister!

However, the crude and brutal assassination of Saudi dissenter Jamal Khashoggi, attributed directly to the recklessness of the young Prince himself, was the last straw for the Western nations in condemning MbS openly. His style of management by intimidation, coercion and “buying out” became obvious as indeed his deep-rooted insecurities and ambition that saw him systematically “neutralise” all opposition.

Recent international opprobrium has led to heightened insecurities and the Saudis have, therefore, made a deliberate outreach towards the alternative global platform of the East as they hope to enhance their economic and geo-political stability with two of their top three export markets, namely China, the biggest, and India, the third biggest revenue generator. However, his pit-stop at Islamabad was, perhaps, the most significant for it addressed the perennial and foremost fear in the minds of the Saudi Royal family — regime change.

Historically, Saudi Arabia’s closest Muslim ally, Pakistan has been the trusted go-to nation for managing all internal and external threats to the vulnerable House of Saud. The role of the Pakistan Army’s Special Services Group (SSG) in overcoming the seizure of the Grand Mosque at Mecca in 1979 typified both the sort of domestic challenges that beset the rule of the Saud family as indeed the faith reposed on Pakistani soldiers.

In the 1970s and 1980s, up to 20,000 Pakistani soldiers were said to be deployed within Saudi Arabia to protect its sensitive spots. With the sixth largest military in the world, reasonable combat-exposure and even nuclear capabilities on Pakistan’s side, the Saudi-Pakistan relationship became more symbiotic, logical and mutually-gratifying.

Custodianship of the two holiest mosques and as the ready ‘investor’ in all domestic urgencies of Pakistan led a former Pakistani Ambassador to Saudi Arabia to famously state that the security of Saudi Arabia was a “personal matter.” It is often claimed that the Saudis had even secretly funded the Pakistani nuclear programme as it allowed them the plausible option of deniability as also ensured the requisite protection via Pakistan in the face of growing threats from its sectarian-nemesis, Iran and also states like Saddam’s Iraq and Israel.

The Saudi funding of the Pakistan-controlled Afghan mujahideen in the 1980s and 1990s is a matter of recorded fact. Today, a leaner Pakistani contingent in the form of “advisors,” trainers and even combat soldiers, ensures the continuity of this crucial comfort-factor for both nations. Deteriorating relationship with the US and parallel growing proximity of both nations with the alternate power centre of China is yet another matter of strategic option and convergence.

The influence that the Saudis can wield on the Pakistani state and also its powerful military was in full display when the Saudi brokered release and exit for the deposed Prime Minister Nawaz Sharif  in the 1999 military coup by the then Pakistani General, Pervez Musharraf.

Later, the Saudis were able to rope in the just-retired Pakistani Chief of Army, General Raheel Sharif, to head the controversial 41-nation Islamic Military Counter Terrorism Alliance (IMCTA), based out of Riyadh — without General Raheel Sharif completing the mandatory two-year “cool-off” period required before accepting any international assignment.

There was a minor bump in the relationship with Pakistan shying away from committing its military forces in Saudi Arabia’s misguided war in Yemen, owing to sectarian implications within the tinderbox of Pakistan itself. Soon, security desperation for the Saudis and the dire economic desperation for Pakistanis ensured that the two nations perpetuate and strengthen the umbilical cord of quid pro quo.

Expectedly, Pakistan pulled out all stops to roll out the red carpet for MbS and he did not disappoint his hosts with a slew of $20 billion investments for cash-strapped Pakistanis. More pertinently, the loaded statement, suggesting the dissuasion of “politicising the UN listing regime,” when India was in the midst of making international efforts to name and shame Jaish-e-Mohammad’s Masood Azhar, did not go unnoticed in New Delhi. Maturity, gravitas and nuanced diplomacy is not a known MbS strength, and particularly at this moment of vulnerability for himself, he would be driven by the urge to buy out Pakistani guarantees for securing the Kingdom’s worst nightmare — regime change.

No other country of the 41 nation IMCTA grouping has either the quantity or quality of readily-deployable military or is as deeply indebted to Saudi Arabia for its own economic survival (2.5 million Pakistani work in Saudi Arabia) as the Pakistanis — affording a win-win solution for both by deepening ties. Imran Khan’s charm offensives elicited a candid and spontaneous, “Consider me Pakistan’s Ambassador to Saudi Arabia,” from MbS.

Therefore, given Saudi Arabia’s own priorities and strategic roadmap imperatives, Pakistan will remain a preferred ally that will always benefit from a deliberate overlook for any of its misdemeanours as long as they do not harm Saudi Arabian interests directly.

India shares common ground with Saudi Arabia on religious extremism (finally) and on organisations like the Islamic State (IS) or Al Qaeda — though a similar aversion and clamp-down on the subcontinental extremist bodies like the Jaish-e-Mohammad or even the Pakistan-sponsored Taliban, may not be as forthcoming.

On the contrary, equity with the likes of the Afghan Taliban may actually give Saudi Arabia counter-leverage against the US in its battle of wits. Diminishing the Pakistani establishment, especially its military, would be perceived to be extremely counter-productive to Saudi interests, as it risks portents of regime-change in Saudi Arabia — a nightmare that Pakistan willy-nilly guarantees against.