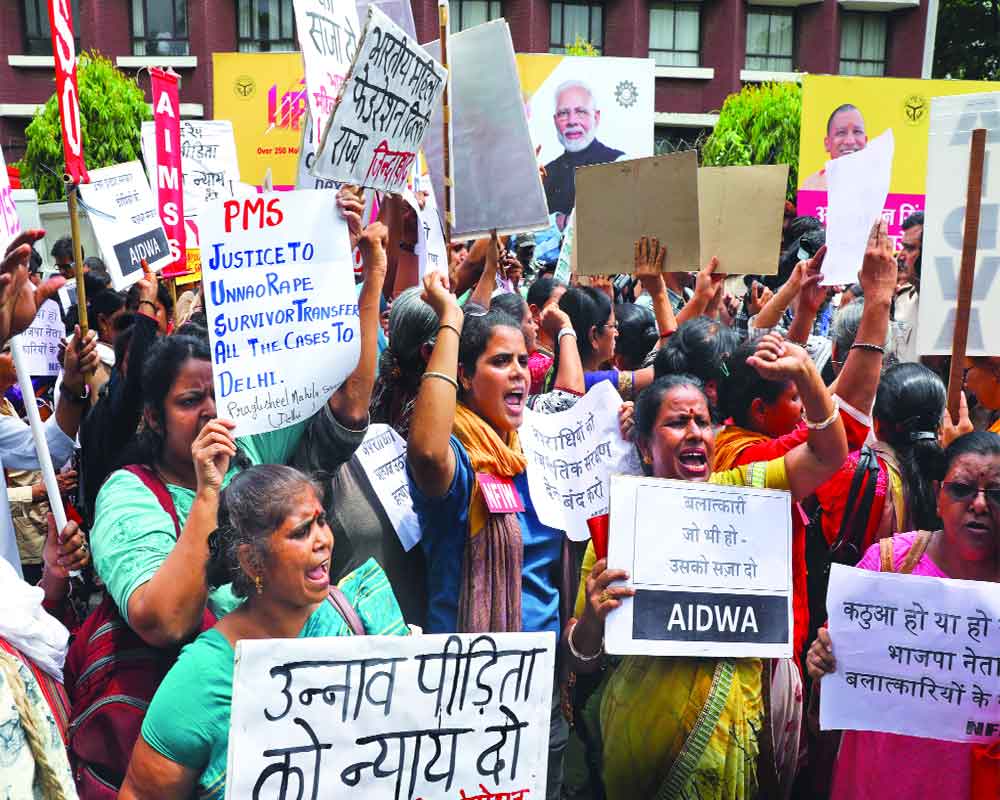 It would be easy to attribute such mindset to the resurgence of revisionism or a stoking of primal instincts. But male behaviour in this era is linked to political contexts

Enough has not yet been said of the brutality of the “One India” narrative and the brazenness with which it legitimises the lowest common denominator of societal attitudes and a viral thinking. Two incidents over the last few days embody a deeply disturbing and distressing fallout of the muscular leadership in the political space degenerating into gender triumphalism in the social space. One that automatically assumes muscularity and decisiveness as admirable male traits and everything else as supine and feminine frailties. Is “toxic masculinity” then the new national character? Now codified almost?

The first case was of the Unnao rape accused Kuldeep Sengar, now expelled by the BJP, wishing a speedy recovery for the survivor with not even a twitch of emotion or even betraying his predatory nature, one that he had used to hound, scare and subjugate her for two years. The girl, whose family was neutralised or eliminated through means foul and his intimidation, had to threaten self-immolation in front of the UP Chief Minister’s residence for her ultimate appeal to justice. And a national conscience. Sengar is in custody, booked under serious charges and now even guilty by evidence, but that hasn’t stopped him from squashing his female victim where it hurts the most. As she fights for every breath of her life in a hopeless situation, Sengar publicly insulted her effort by “wishing her well,” the final blow to her dignity, patronising in dispensing grace while being the perpetrator of her humiliation. Some distorted charity that he thinks will earn him clemency. Sadly, it has for the last two years.

The second instance was even more belly-churning. As the government road rolled its way into changing the character of Jammu and Kashmir by abrogating Article 370 and bifurcating the State into Union Territories, a majority of reactions on social media were about how every Indian male could now marry “fair Kashmiri girls,” buy property and settle down in the Valley, the implication reeking of feudal conquests of the darkest ages of civilisation, where women were traded as spoils of war. A forceful integration amounts to a war on people over land. Nobody even stepped in to condemn such irresponsible and crass humour, which was relished by many. And considering that a certain level of awareness, power and education can be assumed of online citizenry, this truly was a new low, no different from the mentality of an invading, occupation force of the medieval era. Since when were Kashmiri women prevented from marrying outside the State? Many have already done that out of free will, knowing full well that it would entail relinquishing claims to their family inheritance. Of course, to the avaricious male, she can now be entitled to her birth heritage. Is that the implication? Also did anybody ask why Kashmiri women would agree to marry outsiders, particularly in challenged circumstances as now? Or why they are not a voiceless tribe and just like other women in the rest of India? Yet there is a sweeping assumption of their acquiescence to a new order in this pernicious propaganda warfare that is deeply problematic. By denying them their equal, civil space and appropriating their human rights of choice and decision-making, it shows that political control is equivalent to a patriarchal social authoritarianism. Also, by equalising marriage with a Kashmiri woman and acquisition of land in Budgam for a summer chalet, the script-writers are blanking  out consent and will of the other side and force-feeding choices.

It would be easy to attribute such behaviour and mindset to the resurgence of revisionism or a stoking of primal instincts. But male behaviour in the millennial era has considerably changed organically, lending heft to the definition of metrosexuality. This then is not latent expression but an adjunct of hardening politics worldwide, where sexism and gendered violence are being redefined as a masculine privilege of power. In the Indian context, it is about inequality of political power and the way it is dispensed. It is about a certain male chest size which can be the nation’s armoured shield like no other. One has only to look at the way political decision-making process has converted the democratic process as a fait accompli. Nowhere is this totalitarian might more evident than in Parliament, where productivity is about steamrolling legislation and the consultative, cooperative process is seen as wasting time and energy, where opposition is about anti-nationalism and considered opinions are national deterrents to possibilities, where plurality is pointless and negotiation an extinct tool of trade. In a system, where monotheistic and simplistic decision-making is blurring out layers and complexities, and power flowing from an iconised perception of maleness, it must follow that society will react to it. For it is only real life conditions and forces that sustain popular culture, in our case a brainwashed sort. One where institutions and purveyors perpetuate the sentiment rather than political thought. This explains why the Hindi film Kabir Singh, which celebrates toxic masculinity and a subjugation of gender roles, finds crores of takers in the 21st century and is frighteningly endorsed by the youth in middle and small town India. This is so different from the “angry young man” of the 70s, who was fighting the establishment against such ruthless toxicity of power.

What confounds the discourse is attributing male superiority to our cultural DNA when fact is an eco-system has been created to foster an old construct for easier acceptance. A study conducted in the US on alcoholism may be cited here to explain the context. The alcohol industry there had funded research to deny the relationship between alcohol and violence and instead blamed “masculinity” and “cultures of drinking.” But the study uncovered strong evidence that the density of liquor shops in a given geographic area increased the local rate of domestic violence and recommended that  any serious framework for preventing violence against women would have to address alcohol availability as well as sexist mindsets. In other words, such a mindset is being engendered by systematic and selective blanking out of existing narratives and pushing convenient ones with brute force.

The problem with this approach in our society is that we have still not begun to respect women’s rights as evolutionary but as an imposition of grace by a male order. We have not been able to pass the Women’s Reservation Bill at a time when it was required to ensure proportional representation that would ensure inclusive participation and policy-making, not even now when a flurry of other Bills have made the cut. All women and child-friendly schemes of the government are bestowed rather than earned. The very act of “empowerment” assigns the agency to an external power of dole rather than claiming rights. And with so much muscularity of purpose on display, embracing the virtues and strength of femininity as a man upsets operable binaries. If reason, counsel and civility are now emaciating characteristics, then the idea of power automatically gets slotted in the privileged domain of a raw, hunter-gatherer masculinity. The otherness gets lumped in baskets of minorityism, liberalism or feminism. Of these, feminism is the easiest to target as the tide of opinion still favours men. Generations of women in India have worked tirelessly to rebalance the equation between sexes, often mistakenly acquiring masculine qualities and benchmarks to do so. Now they have a far tougher political context of endowment to battle, one where humaneness is predicated on the dehumanisation of others.