Two begums? No longer in Bangladesh

Two begums? No longer in Bangladesh 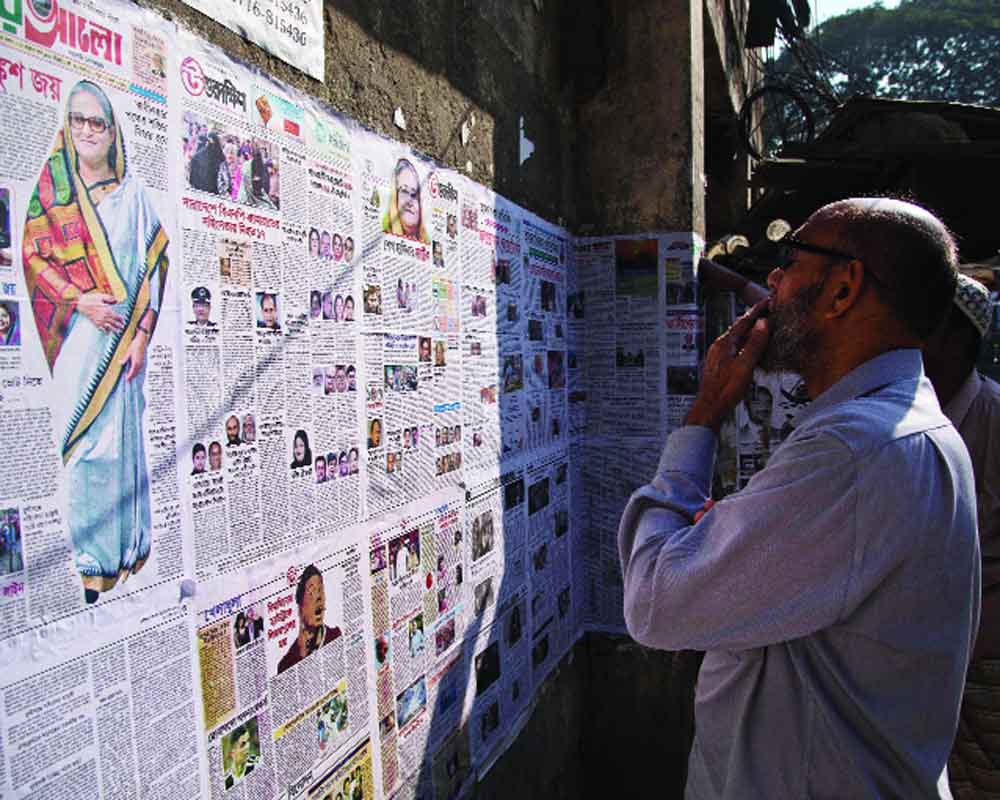 Bangladesh poll results have made it clear that triumphant Sheikh Hasina doesn’t have to face jailed and ailing Khaleda Zia in the political arena in near future. The ‘lady in charge’ in Dhaka needs to show she cares for democratic institutions and is ready to stomach healthy criticism

Bangladesh is no more the battleground for “Two Begums” — Sheikh Hasina and Khaleda Zia. It is crystal clear with the results of the general election concluded on December 30, 2018. Sheikh Hasina, the leader of the Awami League (AL)-led coalition, has decimated all Opposition forces in the country for the forth five-year term. The AL won 257 seats, and an alliance partner 22 seats with the total 288 in the coalition bag in the 300-member Jatiya Sangsad (National Parliament).

Political analysts say that this election definitely demonstrates Hasina’s growing power and popularity. She has improved her electoral tally by 25 seats. Also, it is imperative to mention that the last election was completely boycotted by the Bangladesh Nationalist Party (BNP) and even then Hasina’s electoral march had to stop at 263. But this time, despite countrywide protests, record violence that killed more than 15 people, and unity among Opposition parties could not stop Hasina romp home in the election. And Zia’s BNP-led Jatiya Oikya Front (JOF) or National Unity Front (NUF) just won seven seats. The JOF has managed to get about 15 per cent of the total vote share.

How Hasina has climbed this long ladder of “political prowess” is worth taking a note. She enjoys a rich legacy of political royalty of her father, Sheikh Mujibur Rahman, the founding father of Bangladesh and its first President. After Rahman’s assassination in 1975, Bangladesh politics took a queer turn and turned into a battleground. Ironically, both Hasina and Zia fought together to oust General Ershad, a military dictator, to bring democracy back to the country. But later, the two turned their arsenal to each other for the sake of political survival.

Hasina served as the Leader of Opposition during 1986-90 and again during 1991-95. But then her party AL captured power in 1996 and she became the Prime Minister of the country from 1996-2001. In 2001, Hasina lost power to Zia, but staged a comeback with a landslide victory in 2009 and since then she has been there at the centre of Bangladesh politics despite facing all odds, particularly encountering a sharp rise in jehadi terrorism.

However, what has been doing the rounds is that Bangladesh is soon turning into an autocracy. Hasina is in power since 2009. Throughout all these years she has been accused of crushing the Opposition, particularly her arch rival Khaleda Zia, but most of the media agencies have been accused of turning a blind eye to the blatant violation of human rights across the country. However, what is boding well for 71-year old Hasina is that she presides over strong economic growth.

Can we count Zia as a potent political force anymore? Many analysts say “yes”. Despite her ill-advised political priorities, she remains a hope for a large support base in Bangladesh. She was the Prime Minister of Bangladesh for two terms and happens to be the first such person to occupy that post in the entire Muslim world. This time just before the election, she was in jail and her party worked hard to free her from the prison. She was awaiting bail in two out of the 36 cases lodged against her. What has been noticed in Bangladesh politics so far is that personality cult, deep emotion and charisma of leaders generally trump facts and clear way for massive electoral gain. But unfortunately, that did not come true for Zia. Once dubbed the “Lady in charge”, Zia is now facing almost a bitter test for her relevance in Bangladeshi politics, though she still remains a very powerful figure.

What signals danger for her party, BNP, and the JOF is that they can completely be out of Jatiya Sangsad (Parliament) this time despite getting elected from seven constituencies. All their seven elected MPs have not taken oath so far. Interestingly, under the existing law in Bangladesh, MPs-elect should take oath within three days after publication of the Gazette. If anyone fails to take oath within 90 days of the first session of the Parliament, their seats will fall vacant. This will offer a golden opportunity for the AL to capture the entire Parliament.

Another serious implication for Zia can be her last jail term which extends up to five years. This will automatically disqualify her from contesting parliamentary election for another two years under the existing Bangladeshi law.

Again, Zia and her party have committed a grave mistake by anointing her son, Tarique Rahman, as the chairperson of the BNP. This shows the tendency of promoting family rule and indicates the denial of chances to the senior leaders of the BNP to take charge. The BNP sinks and swims only with Zia. Beyond her, there is no hope, no future for an entire flock of leaders. It was very much evident when the BNP announced its “Vision 2030”. It categorically failed to promote a picture for a future Bangladesh. The vision document clearly showed an absence of specific policies either for the outgoing parliamentary election or for a vibrant Bangladesh. This all is happening because of her charismatic influence and dominance of her persona over the party. Last but not the least, her decision to make an alliance with the Jamaat-e-Islami confused people what really she and her party stands for.

The recent rise in Islamist violence in Bangladesh is leading to a polarising political debate over the country’s secular credentials. From 2015 onwards, the country has been witnessing a sudden upsurge of jehadi elements, leading to terror attacks in public places, targeting individuals and particularly, media personalities. Tough Hasina has taken necessary steps in this regard, much more needs to be done to herald an atmosphere of tranquility.

What comes as a surprise from Hasina is that while taking oath as the Prime Minister, she urged her party colleagues to be humble. She said, “We are in power now, but remember that it is not permanent… If we stand by the people, nobody will be able to remove us. We have won three consecutive landslide victories. But do not consider yourselves more powerful now. Rather behave humbly with the countryman.”

And also she has asked her MPs not to be biased as they are elected by all and they have to work for everyone’s development. This signals little hope amid fear and violence created consistently by the supporters and sympathisers of her AL.

From the recent instances of charges and counter charges filed against Zia, it seems she has been left on the sidelines to simply live her life. Her political future is bleak. Ageing and ailing Zia might slide into political oblivion soon. This will bring an end to the two-party system, widely evident and grown over almost more than three decades in Bangladesh. When the court declared her last sentence in 2018, an upset but confident Zia told her relatives and party supporters, “I will be back, there is no need to cry.” Some political observers hope she will come back as it will offer the Bangladeshi people a credible Opposition to keep watchful eyes on the AL-led alliance Government.

Nevertheless, with her pronouncements and cautions to her party workers, Hasina has largely grown up as a democratic dictator. Having the popular mandate of the Bangla people, Hasina’s objective should be to continue building faith in all pillars of democracy so that people from different political shades feel safe and secure in the country. Being the longest serving Prime Minister of Bangladesh, she can take the country to the next stage of development, growth and democracy.

In 2018, Hasina was ranked the 26th on the Forbes’ list of “The World’s 100 Most Powerful Women”. But today, ordinary people in Bangladesh are increasingly seemed to be tired of the constant personal animosity between the two Begums as it fuels not only the political dynamics but also the public discourse in this poverty-stricken nation. While listening and implementing the dictums of Machiavelli, Hasina should not put a deaf ear to what Sun Tzu and Rousseau said. Above all, “popular sovereignty” matters the most. It is “vox populi, vox dei” after all. Hence, in her fourth term, it is good that she treads carefully.