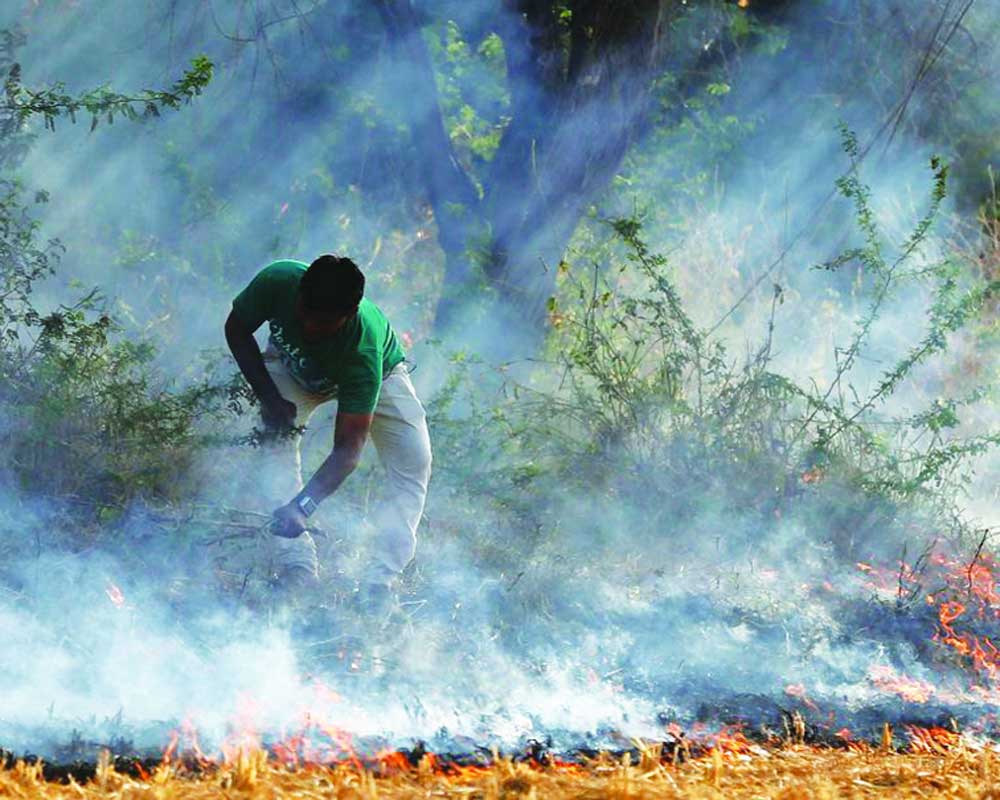 With a robust combination of the right policies, economic incentives and awareness campaigns, the problem of managing crop residue in an environment-friendly manner can be addressed

Delhi, one of the world’s most polluted cities, is in the news again for its worsening air quality as the Government has been forced to close schools and declare a health emergency. The much-loved winter months in other parts of the country are a nightmare for the residents of Delhi-NCR as the area gets enveloped in a blanket of toxic haze.

With the Air Quality Index (AQI) reaching new levels each year and going as high as 1,200+ (classified ‘Hazardous’) this month, the city is suffocating, literally. Apart from coal and construction dust, vehicular emissions and smoke from Diwali firecrackers, stubble burning by farmers in the States of Punjab, Haryana and Uttar Pradesh (UP) are cited as the primary reason for this crisis.

While the Delhi Government has been trying to bring down pollution levels through its vehicle rationing odd-even scheme and by closing polluting factories and coal-based power plants among other things, biomass burning is something it has failed to stop. For this, it needs the cooperation of its neighbouring States and has no control over the farmers there.

Crop residue burning is a practice where farmers set their entire fields on fire after harvesting the rice crop, to make way for the next i.e. wheat. The sowing of rice is timed such that its intense water needs are met by the monsoon rains in the Indo-Gangetic plains and the crop is harvested just before winter starts. However, the result is a whopping 23 million tonnes of paddy residue in the fields that need to be cleared in a short span of 10 to 20 days, before the farms are readied for sowing wheat. If the farmers had more time between crops, they could have just left this biomass lie in the fields and let it turn to mulch, which is an excellent fertiliser. However, with such a short gap between the two crops, setting fields afire seems to be the easiest way to get rid of the stubble. This however severely degrades the ambient air quality of Delhi-NCR.

Taking cognisance of the consequences of stubble burning, the Government banned it in June, imposing fines on those who defied the diktat and recently the Supreme Court (SC) even pulled up the chief secretaries of the three neighbouring States and ordered them to ensure that farmers don’t burn crop residue anymore.

Nevertheless, the practice seems to have continued as growers contend that feasible, affordable and scalable alternatives are lacking. In an effort to encourage farmers to find alternatives to burning the residue, the SC had also directed the three States to pay Rs 100 per quintal of paddy straw to growers, but it doesn’t seem to have worked.

The atmospheric factors at play: People often wonder how a practice followed a few 100 km from Delhi-NCR has big implications. Here is the science behind this phenomenon. During winter, the region sees low wind speeds and temperature inversion — an atmospheric phenomenon where the temperature of the air near the surface is lower than that of the air higher in the atmosphere. Hence, when the pollutants from vehicular emissions and crop burning are released into the air, they are not dispersed but trapped in the lower layers of the atmosphere. As a result, the air quality takes a deep dive.

“Air pollution in cities like Delhi may be attributed to the growth of the metro and the pollutants from sources far away that get carried to the national Capital by the moving air or environmental conditions, which are unfavourable for the dispersion of pollutants,” said Prof Vinoj V from the Indian Institute of Technology (IIT), Bhubaneswar, talking about his study published in 2018. The study, among other things, had found that crop burning has been increasing at an alarming rate of 25 per cent since 2000.

It isn’t Delhi alone that takes the hit; other tier-2 cities in the region also seem to be affected by biomass burning for similar reasons. A 2019 research, which investigated the source of pollutants in 20 Indian cities other than Delhi, found that in places like Amritsar, Chandigarh and Ludhiana, crop residue burning, along with emissions from power plants and seasonal dust storms contributed to about 50-52 per cent of particulate matter.

In essence, the timing of winter-related atmospheric phenomena, coupled with the surge in emissions when the fields are set on fire, is a perfect pollution cocktail.

The health and economic costs of stubble burning: It is well-known that inhaling polluted air can lead to severe health conditions like lung cancer, diabetes, cardiovascular diseases, asthma, bronchitis and dementia. Not just this, air pollution also adversely affects crop yields in India. But, what really is the economic cost of stubble burning in these maladies?

A study, published by researchers at USA’s International Food Policy Research Institute and Oklahoma State University, pegs that number at $30 billion, including the economic loss and associated health costs. It found that about 14 per cent of acute respiratory infections, recorded in Haryana, Punjab and Delhi in 2013, could be attributed to stubble burning. Researchers estimate that living in areas where there is intensive crop burning increases the chance of acute respiratory infections three-fold, with children under the age of five being the most affected.

Crippled policies adding to woes: As most studies have pointed out, a robust combination of the right policies, economic incentives and awareness campaigns are the need of the hour to curb the “burning” problem of air pollution. Badly-designed policies could have unintended effects on air quality, as shown by a research from the International Maize and Wheat Improvement Center in India and Mexico and the Cornell University, USA. It showed that groundwater conservation policies, introduced in 2009 in Punjab and Haryana, could have contributed to the rise in stubble burning.

Although rice is a lucrative crop for farmers, it is water-intensive. Hence, the ‘Punjab Preservation of Subsoil Water Act’ and the ‘Haryana Preservation of Subsoil Water Act’ banned the transplantation of rice before monsoon to conserve groundwater. As the monsoon arrives in these States in July, the crop is harvested in early November, forcing farmers to clear their fields as soon as possible for wheat sowing. Using satellite data, the study found that prior to 2009, about 40 per cent of rice was harvested by late October and this number declined to 14 per cent after the law was enforced. The number of fires went up from 490 per day during late October prior to 2009, to 681 per day, peaking around early November. The average daily PM2.5 concentrations in November were also found to be 29 per cent higher after the groundwater Acts were passed.

With the clamour for alternatives to stubble burning increasingly being heard, science may have solutions, as shown by a 2019 study. It analysed 10 alternatives to stubble burning and found that contrary to what farmers believed, these methods were not only environment-friendly, but also profitable. Among them is using Happy Seeder, a machine that can sow wheat despite the presence of rice straw in the fields. This yielded nearly 10-20 per cent increase in profits or about Rs 11,498 per hectare on an average. The profits come from lower land preparation cost and the reuse of the crop residue, which increases soil moisture and benefits the long-term health of the soil.

However, these benefits come at a cost of  Rs 2.4 billion — necessary to produce about 16,000 Happy Seeders to cater to 50 per cent of the rice — wheat cultivation areas. With a meagre subsidy of Rs 2,000 provided by the Government for purchasing machines to manage crop residue, machines like Happy Seeders are unaffordable to many farmers, leaving them with no options but to set fields on fire.

As most of these studies have pointed out, with a robust combination of the right policies, economic incentives and awareness campaigns, the pressing problem of managing crop residue can be addressed. It is about time that policymakers took note of such insights and acted to provide us all with clean air to breathe — a basic necessity of life.

(The writer expertizes on science and is associated with Gubbi Labs)