US law can’t usher in democracy in Hong Kong

US law can’t usher in democracy in Hong Kong 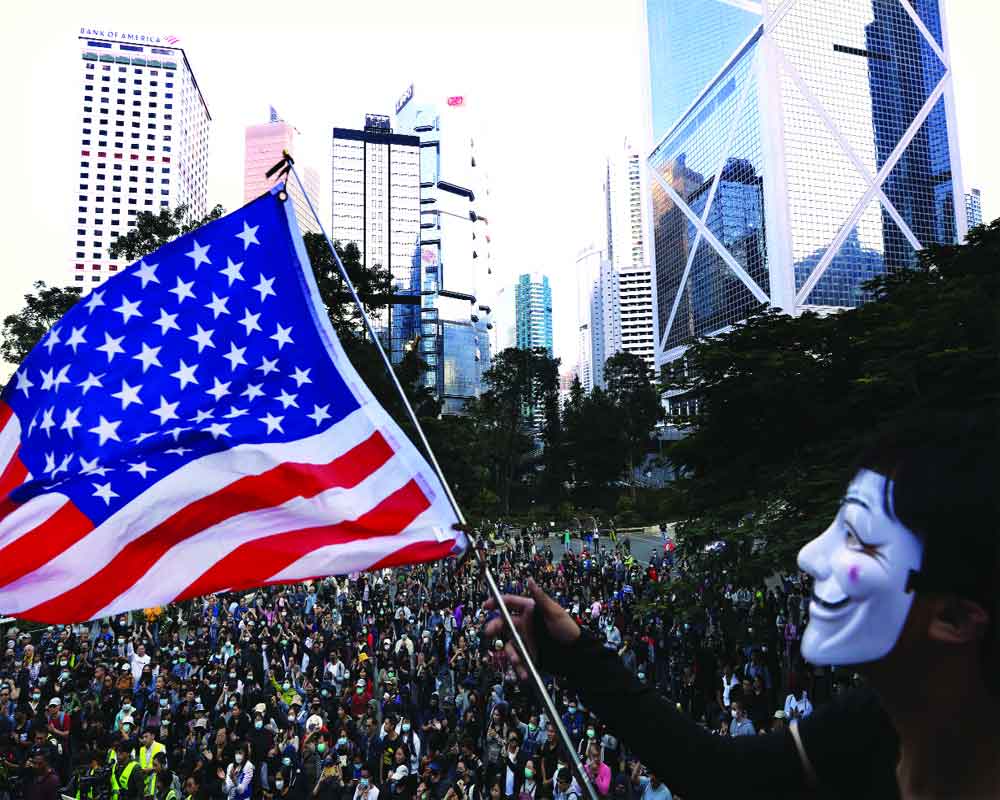 By enacting the Hong Kong Human Rights and Democracy Act, the Donald Trump Administration has thrown its weight behind the pro-democracy demonstrators of Hong Kong, and put extra pressure on China to redeem its year-1997 promise of autonomy for the region. However, the Hongkongers must realise that an Act passed by the US Congress can’t change the political system in the sovereign territory of the People’s Republic of China. A solution lies in taking a pragmatic approach, by perfecting, respecting and preserving the ‘One Country, Two Systems’ for Hong Kong

Hong Kong witnessed an unprecedented democratic exercise last week. The results of the just concluded elections for 18 District Councils in the city can at best be termed as an affront to China. The Opposition won 392 of the 452 elected seats in all the District Councils. The pro-Beijing parties could bag only 60 seats. And this happened to the Government allies despite having strong backing from the city administration and from the Central Government in the mainland China. Thus the election outcomes manifest a clear mandate for the pro-democracy groups and parties for a forceful say in the political-economic set-up in Hong Kong.

The results were recorded as a historic low for the pro-Government political parties as they fell from 300 seats to just double digits. It must be noted here that the pro-democracy groups have unbelievably rose over three-fold from 124 seats earlier. Moreover, the voter turnout in the District Council elections this year soared to 71.2 per cent, a whopping 47 per cent spike in comparison to the 2015 polls.

First of all, the election results will definitely add pressure on the embattled city chief Carry Lam. She has already admitted that public dissatisfaction with her administration virtually led the Opposition to win the majority of the seats in the local elections. But in order to justify her actions against the protesters, she claims that a silent majority is still supporting her Government.

Second, the results of the local elections do not matter much for both the city Government of Hong Kong and the Central Government in Beijing. It is so because these councils look after only local affairs, such as maintenance of public places, waste management, etc. But the way Lam is reacting to the results shows that she is nervous about the pro-democracy camp’s successful electoral march. This can be gauged from her statements released immediately after the declaration of the poll results. She said, “There are various analyses and interpretations of the results and quite a few are of the view that the results reflect people’s dissatisfaction with the current situation and the deep-seated problems in society.”

Further, without recognising the demands of the protesters, she simply said that the Government respected the results and wished the peaceful, safe and orderly situation to continue. And, she also aired her views: “The Government will humbly listen humbly to citizens’ opinions and reflect on them seriously.” But, it seems the Hongkongers are not going to believe her word. There is no iota of doubt among Hongkongers that Lam will always toe the Beijing line.

Third, it needs to be assessed why the local election results are seen as a referendum on the political life of Lam. It is so because these are the only political offices wherein the mainland and the Hong Kong laws allow a full universal suffrage to decide the fate of the candidates. When it comes to the highest political office in Hong Kong i.e. the Chief Executive, he/she is elected by a privileged committee, consisting of 1,194 members wherein 70 members come from Hong Kong Legislative Council (Legco) and the rest belong to a mix of businessman, professionals and trade elites. This committee is supposedly broadly representative as per the statutes of the existing Hong Kong Law, but critics view it as being unfairly lopsided towards representatives from business and trade. The critical point in these representatives is that they generally vote in favour of the diktats of the Beijing power elite. Thus, the demand for a full-fledged universal adult franchise continues in Hong Kong for the election of the Chief Executive.

Fourth, what do the poll results point to? This once again repeats the sheer rebuff from the Hong Kong protesters to both the establishments in Hong Kong and Beijing. This is not the first time the Hongkongers are staging protests against the city and the mainland administrations. Five years back in 2014, thousands had stormed the streets of Hong Kong.

Fifth, what kinds of reactions are pouring in from the Xi regime to this pointed rebuke in the form of emboldening democratic aspirations in Hong Kong? For now, the socialist establishment in Beijing is simply downplaying the poll outcomes. The Chinese state media has completely downplayed the local elections. The Communist Government did not comment directly on the election results, but President Xi Jinping’s office has blamed external interference in its domestic affairs. Geng Shuang, a Foreign Ministry spokesperson, said: “The most pressing task for Hong Kong at the moment is to stop violence and restore order. As Hong Kong is part of China, its affairs are purely domestic affairs. China is determined in safeguarding national sovereignty, security and development interests.”

And it has been highlighted once again that Beijing is determined to maintain the historic “one country, two systems” model in regard to the governance of Hong Kong. Besides, the Chinese Communist Party’s People’s Daily, without mentioning the results, reported that the month’s long social unrest in Hong Kong has severely disrupted the election process and that the patriotic candidates were harassed on the day of the election by those seeking chaos. The official news agency Xinhua blamed foreign forces and said the elections had fallen victim to the social unrest. What has been noted is that the major newspapers and party mouthpieces in the mainland China squarely accused the Hong Kong activists, particularly the young agitators, of sabotaging the entire election process and campaign activities of the pro-establishment candidates, and finally, prevening them from voting. This makes it amply clear how the opinions and narratives are divided on both sides of the territory.

For the mainland Chinese, Hong Kong is a mere piece of an area of the People’s Republic of China, like any other, and it should be governed according to the existing laws and regulations of the country. Maybe many of them would prefer to stress on maintenance of stability rather than chaos what Hong Kong has been experiencing for quite some time. Also, the rebuttal of the propaganda based solely on the nationalistic perspectives of the Xi regime and stern laws by the Hongkongers are not being taken lightly by the mainlanders. With continued machinations of the Communist Party and its various organs, both in public and in private, residents of the mainland may have developed a sense of alienation and apprehension about the very intentions of the Hongkongers.

Last but not the least, what is aggravating situation in Hong Kong is the new law passed by the US Congress and signed by President Donald Trump this week in regard to Hong Kong. The new law known as Hong Kong Human Rights and Democracy Act (HKHRDA) professes full support to the pro-democracy demonstrators in Hong Kong. This law aims to back Hong Kongers in defence of their autonomy promised by China way back in July 1997 when the territory was handed over by Britain to China under the Sino-British Joint Declaration. Also under the HKHRDA, the status of Hong Kong will be reviewed by the US State Department annually to justify continuation of favourable trading terms. The law threatens sanctions for human rights violations by the officials of the Hong Kong Government. In fact, with respect to US policy goals towards Hong Kong, it is believed that there is widespread agreement on the need for Beijing to abide by the 1984 Sino-British Joint Declaration and the “One Country, Two Systems” formula while resolving differences among various groups and political parties peacefully, and finally, respecting human rights. But China has warned the US for siding with the pro-democracy protesters. It has denounced the controversial US Act as gross violation of international law and a direct meddling in its domestic affairs. A Foreign Ministry statement directly cautioned that the Trump administration would shoulder the consequences of China’s countermeasures if it continued to act arbitrarily in regard to Hong Kong. This latest round of conflicts would fuel the animosity between Washington and Beijing, even as trade Cold War is going on.

The pro-democracy activists and their leaders seem to be gathering more confidence over massive public mandate showered on them in the District Council elections. Anchored in this conviction, the pro-democracy leaders and supporters may draw their future plans. But bringing the Chinese state under complete pressure is unimaginable for any foreign nation, including the superpower America.

However, crushing a democratic uprising in Hong Kong would be hard nut to crack for the Communists in Beijing. But then dragging it to an uncontrollable point like the current one could systematically erode the economic foundation of Hong Kong. Also, the series of protests have made it clear that the unrest may continue even on the face of extreme level of brutality either by the Chinese People’s Liberation Army or by the Public Armed Police (PAP).

The way forward is to sit and talk. And more importantly there is an urgent need to shun violence by both the protesters and the city administration. The Hongkongers must realise that an Act passed by the US Congress can in no way bring democracy to them, neither today nor in the near future. A real solution lies within, not outside the sovereign territory of the People’s Republic of China. The road ahead lies in perfecting, respecting and preserving the “One Country, Two Systems” for peace in Hong Kong as well as in the mainland.