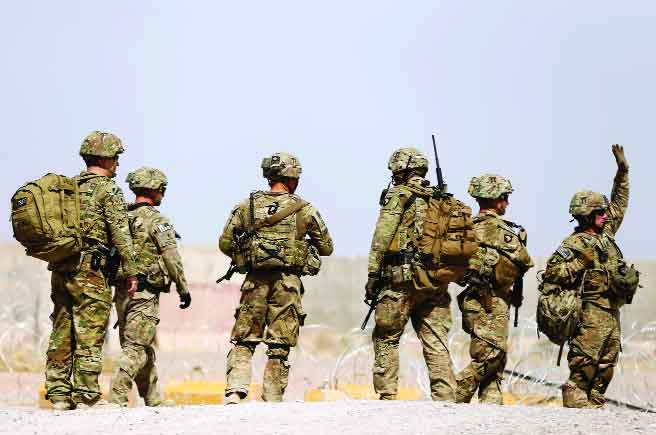 The intrigues, complexities and accompanying civilian atrocities in conflicts in Afghanistan and Vietnam have raised questions about words and action of US

There are eerie similarities in the genesis, proceedings and the ultimate fate of the US involvement in both Vietnam and Afghanistan. First, both — the Vietnamese and the Afghans — pride themselves on their fierce history of resistance to foreign invaders for centuries. In the case of the Vietnamese, it was the valiant repulsion of the Chinese, Mongols, French and the Japanese forces; whereas, the unforgiving battlefields of the Afghan swathes have been bloodied with forces of Alexander, Arab caliphates, Genghis Khan, Timur, Persians, Mughals, Sikhs, British empire and to the communist forces of the erstwhile USSR. Both races have a heightened sense of history and destiny that militates instinctively against any notion of a foreign “invader.” Both these lands have been at the forefront of the US’ efforts to counter the topical “ism” that threatened American interests. In the case of Vietnam, in the 50s and 60s, it was the Cold War fear of “communism” that drove US interest; whereas in the case of Afghanistan (post 2001), “religious extremism” replaced “communism” as the greatest security threat.

In both these conflicts, the US had played a covert, tactical and surreptitious role in inflaming the combustible ground situation. Insidious military and financial support was extended to the French forces in the 50s to re-colonise Vietnam, which later morphed into a full-fledged US military intervention by the 60s. Similarly, the less-than-covert military operations of the Central Intelligence Agency-Islamic State (IS), along with the Afghan mujahideen in the 80s, had lit the flames of religious extremism that ultimately morphed into the phenomenon of the Taliban. The pattern of sudden US disinterest is also common to both places as Vietnam would face in the mid-70s when the forces of Ho Chi Minh overran Saigon, as also in the essential US disinterest in the 90s as Pakistan-supported Taliban entered and butchered their way into Kabul. The genesis of both conflicts had unmistakable fingerprints of the US handiwork prior to the full escalation of the crisis. In both cases, the US had erred in its initial judgement as it had twice spurned appeals by the nationalist, Ho Chi Minh, before he turned a staunch communist; whereas, the American desperation to dislodge the communist Najibullah regime in Kabul had led them to honour and fete the Afghan mujahideen in the White House, who later turned on their original benefactors.

Signs of American “shock-and-awe” military tactics to bludgeon enemy lines were visible in the killing fields of Vietnam, where the Americans dropped more than three times the tonnage of bombs that the entire allied forces dropped in World War II. Today, Afghanistan has replaced Vietnam as its longest war and a record high number of bombs dropped in a year were registered in 2018. The definitive imagery of 388,000 tonnes of napalm bombs dropped in Vietnam was mirrored with the unabashed dropping of the GBU-43/B (also known as “Mother of all Bombs”) in Afghanistan — the most powerful non-nuclear weapon in American arsenal. However, despite the colossal commitment of weaponry and military might, the Afghan extremist groups today control more territory than at any point ever since the removal of their regime 17 years ago. The Vietnam War had led to over 58,000 American military casualties and the technology-enhanced Afghan war to yet another 2,400 American military casualties. The “cost of war” to the locals (civilians, soldiers and insurgents) was an unprecedented three million in the Vietnam War and over 111,000 in Afghanistan. From the official start date of the Vietnam War (November 1, 1955) to the signing of the peace treaty in January 1973 for facilitating the withdrawal of American troops, the realisation of an unsustainable “no-win” stalemate took 18 years. Today, nearly 18 years into the Afghan War (started in 2001, following 9/11), the Americans are walking the talk of another American withdrawal, this time from Afghanistan, following yet another stalemate.

Unfortunately, the looming fears of the imminent future are also similarly aligned as the Americans are negotiating with the Afghan Taliban (under the nudge and aegis of the equally unreliable ally, Pakistan) to facilitate the American troops’ withdrawal. In 1973, a similar face-saving treaty was signed by the representatives of the US, South Vietnam, North Vietnam and Viet Cong to ‘reunite’ Vietnam peacefully – even though the signatory north Vietnamese were knowingly violating the terms of ceasefire and agreement and by 1975, the entire South Vietnam territory had fallen to a full-scale invasion by the North. It is this doomsday scenario that has fuelled concerns in the Ashraf Ghani-led Afghan Government in Kabul as they fear the impact of an emboldened Taliban. From 1,50,000 foreign troops defending the beleaguered Afghan Government till 2016, to just about 7,000 (after the current US withdrawal plans), along with the well-known aspiration of “strategic depth” in Afghanistan for the Pakistani state – the military ability of the current Afghan Government in Kabul to withstand the IS-Taliban combined onslaught is extremely suspicious. The sudden vacuum following the US withdrawal in Vietnam in 1973 had led to the ultimate fall of the South Vietnam defences; the US “withdrawal” from Afghanistan in 1991 had led to the creation of the Taliban; and now the insecurity in Kabul is one of history repeating itself.

While history is yet to record its final verdict and victor in Afghanistan, in Vietnam, the Americans can technically claim to have “withdrawn.” However, objectively, the anti-US side overran the US protectorate and they rule till date. Thousands of insurgents were killed in US military operations and multiple more of the same were borne out of the sense of revenge, hatred and retribution against the US. In both cases the human, economic, military and the political “cost of war” became unsustainable and the common feature of “stalemate” wore out the largest military in the world. The intrigues, complexities and accompanying civilian atrocities in both conflicts have also led to serious questions on the morality, trust and confidence on the US’ words and actions. Afghanistan is still an unfolding saga, yet portents of a possible repeat of a Vietnam stare in the face.

(The writer, a military veteran, is a former Lt Governor of Andaman & Nicobar Islands and Puducherry.)