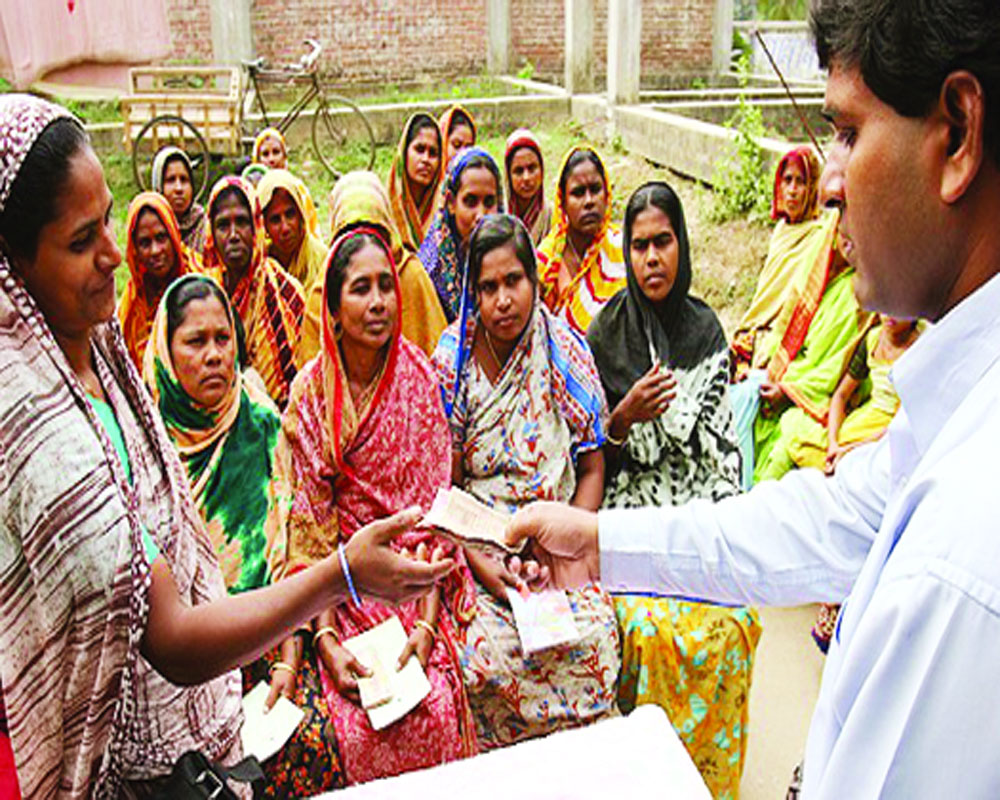 The role of microfinance in financial inclusion, poverty alleviation and woman empowerment is proven. The industry needs to find a balance between commercial goals and social good

Microfinance now seems to be in a buoyant mood. Having fully emerged from the shadows of demonetisation, it showed rapid, regionally-balanced and resilient growth during 2018-19 with the industry’s Gross Loan Portfolio (GLP) standing at Rs 1,87,386 crore at the end of March — up 38 per cent year-on-year. This was reported by Microfinance Institutions Network (MFIN), a Reserve Bank of India (RBI)-recognised self-regulatory organisation and industry association of the microfinance industry.

Compared with the financial year 2017-18, there has been a year-on-year increase of 28 per cent in the number of loans disbursed and 44 per cent in loan amount disbursed. The total number of microfinance accounts was 9.33 crore at the end of March 2019, showing a growth of 21.9 per cent. The growth of the staff of non-banking financial companies (NBFC)-micro-finance institutions was also heartening at 34 per cent, now totalling to 1,04,973 people.

Microfinance is basically the distribution of small loans to the impoverished, who otherwise do not have access to loans, to enable them to raise their income levels, cope with financial shocks and attain a meaningful livelihood. These small-denomination loans are often used for a variety of purposes. It could be for small business or for coping with unpredictable incomes by making funds available to meet basic needs and manage shocks, such as death or illness. Utilised fruitfully, these loans have often enabled borrowers to build sustainable livelihoods. Despite huge growth, microfinance reaches only a tiny fraction of the people, whose lives would be better with access to these basic services. To use a common phrase: “It just scratches the surface.”

However, there are several concerns related to microfinance. Recent studies show that the notion that microfinance has the potential to spark sustained economic growth is misplaced.  In several cases, microfinance activities can damage the prospects of poor people. Microloans do create opportunities for people to utilise “lumps” of money to augment incomes and mitigate vulnerability. But that doesn’t necessarily mean investing in businesses can lead to sustained income growth. Not all microloans produce beneficial results, especially for those engaged in low-return activities in saturated markets that are poorly developed and which are prone to regular environmental and economic shocks.

A growing body of research suggests that microfinance doesn’t work for all communities. It may have worked well in Bangladesh in the 1970s, but failed to keep pace with changing needs and behaviours of the client at the lower socio-economic pyramid. The poor take loans with crippling interest rates or sell their tools and possessions and, hence, lose their basic means of sustenance. Borrowers have been saddled with multiple loans at exorbitant interest rates, often having to borrow from loan sharks to make their microcredit payments. It cannot allow them to vault themselves out of poverty; at least not on a scale large enough to be visible.

The biggest problem is that people, who get these small loans, usually start or expand a simple business. The most common business for microfinance is retail-selling groceries, where there exists fierce competition and people don’t really earn enough money to get out of poverty. Not only are borrowers often innumerate, illiterate and unfamiliar with interest rate calculations, but usually, they have little or no awareness of local demand for goods and services. Consequently, they fail to establish successful income-generating ventures.

High rate of repayment success trumpeted by the microfinance industry don’t necessarily mean customers are doing better, nor does it reflect the struggles faced by clients repaying debts through rigid installments. Inflexible contracts and unrealistic and stiff repayment terms fail to meet the investment needs of poor borrowers, whose income is irregular and highly volatile. It fluctuates over the year, susceptible as it is to economic and environmental factors — the microfinance institution does not provide grace period and demands fixed weekly repayments starting immediately after the loan disbursement. This means one cannot use all the money and will have to retain some portion to make sure he/she can meet the repayments before generating income. This adds to the borrowing costs. All these discourage risky investment.

In the world of microfinance, women borrowers are viewed as autonomous individuals, who make independent choices in the marketplace. But this is not the reality. Rural women live in extended family structures. These women’s identities are relational, shaped by factors such as marital kinship, ethnic and tribal allegiances. They negotiate complex kinship and social obligations. Husbands, sons and fathers-in-laws often take control of women’s loans. Depending on the family’s dynamic, it would be hard to know how much a husband may be influencing or forcing a wife to sign off on something she doesn’t agree with.

One concern is that as micro-finance becomes more commercialised and increasingly concerned with the large-scale impact, profits take precedence over the social mission. Anything not strictly financial is cut in the name of “efficiency.” Profit-minded shareholders see training of entrepreneurs, financial literacy and counselling, skill training, or even the extra five minutes a caring loan officer might spend with a client as a cost rather than as an investment. Since most microfinance clients have little or no security or collateral to pledge, providers instead turn to what is called “social collateral,” which is built through groups of borrowers, who guarantee each other’s loans.

Debt may not be the appropriate tool to alleviate financial woes of low-income communities. It is one thing that has both the greatest promise and, perhaps, the gravest peril. Debt or credit, the cash that we borrow from lending institutions, exists for a reason. Before you apply for it, you should ask yourself if you have a valid reason for it, or are you taking it just because people are lining up the way pollsters queue up for freebies?

The second question one should ask is whether it is part of his/her financial plan. If it is, are you sure you are going to get a return higher than what you will pay? This financial return should also cover your own effort that will go into generating that return. With their dominant presence in rural and semi-urban areas, micro-finance institutions are well placed to bridge this gap. At the same time, the social connect established through financial literacy campaigns helps in developing and enlarging client base. Financial literacy also inculcates the habit of savings and healthy credit culture, thereby ensuring timely repayment of loan.

The role of microfinance in financial inclusion, poverty alleviation and woman empowerment has been proved all over the world. But the industry needs to moderate its appetite for high profits and aim to find the balance between commercial goals and social good. The industry and the Government will have to walk the extra mile. Right policy measures from the Government and regulators and strategic tie-ups with banks will hold the key for micro-finance institutions to serve the people.

The microfinance sector must convince impact investors that micro-finance institutions are professionally governed, efficiently managed and staffed with high talents. They have reliable access to capital markets, diversified product range and unique penetration in the BOP sector. That they have a unique understanding of the complex and sophisticated financial lives of the poor people.

(The writer is Member, NITI Aayog’s National Committee on Financial Literacy and Inclusion for Women)