What Pak stands to lose

What Pak stands to lose 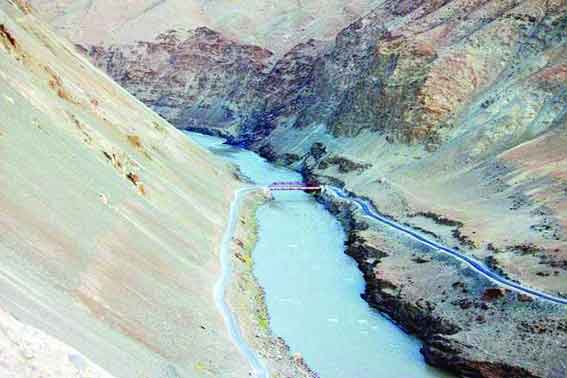 There was a basic difference in the approach of Pakistan and India vis-à-vis keeping the river waters issue alive. Pakistan was the downstream riparian state in a weaker position

In 1948, Pakistan’s Ambassador to the United Nations, Sir Muhammad Zafarullah Khan, declared that on April 1, 1948 India turned off the water of the Indus river which used to flow into Pakistan… India exercised this control upon the waters of rivers flowing through its territory…India turned off every drop of water which Pakistan had formerly received.

Surprisingly, no one in the audience had the presence of mind to ask how can the flow of rivers be suddenly switched off like a tap in the kitchen? The Indus river system issue was, thus, raised first with a thunderous lie. Negotiations between India and Pakistan began thereafter but years were wasted in wrangling as to where, between officers of what qualifications and rank should be involved in the talks.

The river waters issue was dramatically articulated again by former Prime Minister of Pakistan, Huseyn Shaheed Suhrawardy, in 1957. In his words, quoted from the Dawn by Prof Shashi K Gulhati in his book, ‘The Untiring Indian’, “Canal waters and Kashmir are the two prongs of India’s grip on us. There is nothing we can do. India is so powerful that everybody wants to be its friend, including America. If Bharat decides to cut off water, Pakistan would be within its rights to fight for water supply but stopping of water will be greater aggression than our fighting.”

The distinctive feature of irrigation development in this basin, during about 100 years preceding the Partition, was that a development of 26 million acres of intensive irrigation, by far the largest irrigated area on any one river system in the world, had been based entirely on the run-of-the-river with no storage at all, rightly earning the compliment of being one of the proudest achievements of human endeavour. The first four years after Partition had been marked by abortive bilateral discussions between India and Pakistan, leavened with threats and recriminations. Then major developments took place in 1952. First, the World Bank, interested in the economic well-being of both countries, offered to serve as a mediator to help solve the dispute.

A working party of engineers of India, Pakistan and the World Bank was constituted. The World Bank team consisted of Lt General Raymond Albert Wheeler, former Chief of the US Army Corps of Engineers, Pakistan nominated Mohammad Abdul Hamid and representing India were Ajudhiya Nath Khosla, Chairman of the Central Water and Power Commission, and ND Gulhati, who assisted him.

The working party had begun its work long before. Everyone agreed on its ultimate objective. In the words of General Wheeler, it was to develop a comprehensive long-range plan for the most effective utilisation of the total water resources of the Indus river system for the development of the region. Pakistan wanted the discussions to be limited to the three eastern rivers only, keeping the three western rivers totally for itself; India wanted to consider the flow in all the six rivers. The Pakistani plan comprised largely a statement of its irrigation requirements, which added up to three times the total supply of the system.

On February 5, 1954, General Wheeler presented the World Bank’s proposal. But not necessarily from the same source as before. It divided  the six rivers into two parts. All the water of the three eastern rivers would be for the exclusive use of India. And all the water of the three western rivers (Indus, Jhelum and Chenab) would be for Pakistan except for some specific withdrawals allowed to India.

The World Bank proposal presented in February 1954, stipulated that: (1) The entire flow of water of the three eastern rivers would be for the exclusive use and benefit of India after a brief transition period during which Pakistan will construct link canals that would bring water from the western rivers to replace the water then being supplied to its canals by the eastern rivers and India would contribute funds for the construction of these link canals; and, (2) the flow of water of the three western rivers would be largely for the use and benefit of Pakistan.

Six years later, when the Indus Waters Treaty was signed, India could irrigate annually 70,000 acres from the Indus, 400,000 acres from the Jhelum and 231,000 acres from the Chenab, over and above the uses as on April 1960, and, according to Gulhati’s book, could impound, for specified purposes, 3.0 million acre feet on the tributaries of the western rivers and 0.6 MAF on the Chenab main, apart from storage in small tanks and for flood control in the Jhelum main. This is the maximum quantity of water India’s latest decision can cause Pakistan to lose.

Pakistan never wanted that a solution to the Indus waters dispute should emerge through negotiations. It was not inclined to view the problem as a technical one. It wanted to take the issue to the International Court of Justice and seek adjudication. If not that, then it would try to push India into seeking a solution through arbitration. India, however, did not wish anyone or a group, least of all those who were not familiar with the technicalities of river basin development, to thrust a solution upon it.

It soon became apparent, however, that bilateral dialogue with Pakistan was not making any progress and so when the World Bank offered its good offices to assist the two countries to negotiate a settlement, it accepted that offer.

The key point in accepting the Bank’s offer was that it would serve as a good officer that is a facilitator and not assume the role of an arbiter. The World Bank most admirably stuck to this role for many years and went through very difficult times. Even when it seemed that negotiations were on the verge of a breakdown, it urged the two sides to continue the dialogue. After six years of playing such a role, in early 1960, the Bank began to see the light at the end of the tunnel.

There was a basic difference in the approach of Pakistan and India vis-à-vis keeping the issue in the public eye. Pakistan was the downstream riparian state; rivers flowed into it from India. It was, thus, in a weaker position. It felt necessary to arouse sympathy for itself from the international community by maintaining a public posture of a country that was at the mercy of India. From the very outset, it established a publicity front, one that followed its leaders’ populist stance of making little distinction between, on the one hand, an Indian action actually taken or planned and, on the other hand, the extremes to which India, as an upper riparian, might go.

After the Treaty had been signed, some leaders felt that in signing it, India had appeased Pakistan by yielding too many concessions; that the division of waters was much to the advantage of Pakistan. In a reply in the Lok Sabha, Pandit Jawaharlal Nehru asked: “How is this House now to judge the quantum of supply or the quantum of money to be given? I confess I cannot judge it offhand. I am distressed that a matter of this importance, an  issue that concerns not only the present but the future should be treated so lightly and casually and in such a narrow minded spirit.”