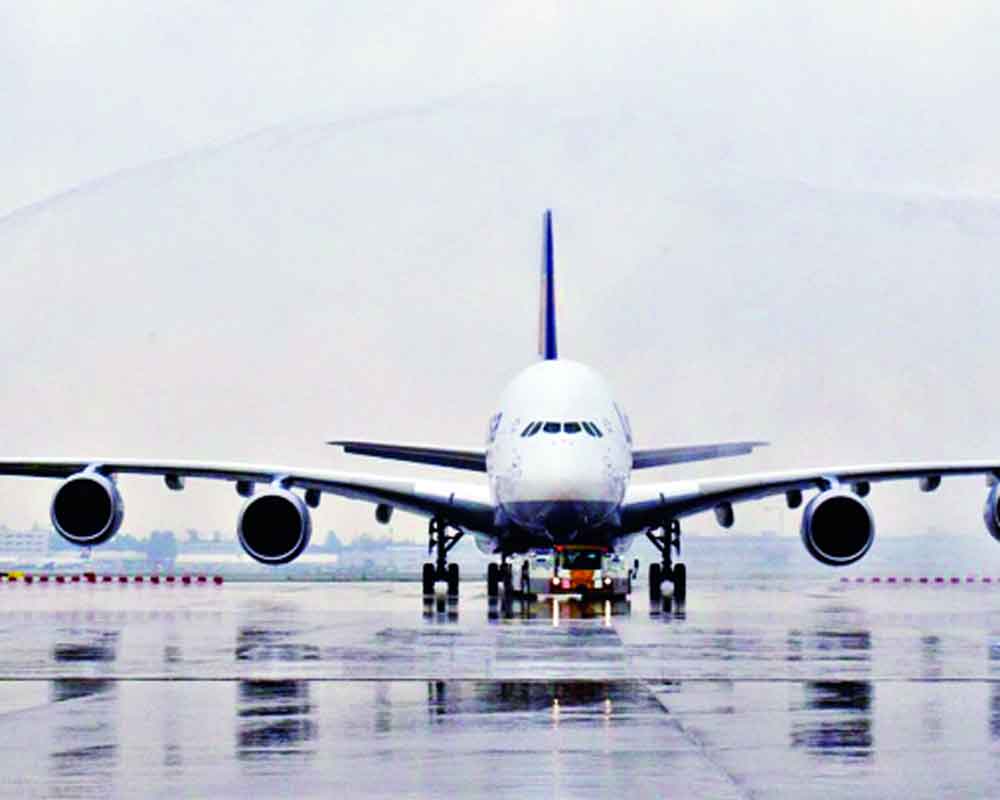 A dramatic change in the manner of flying doomed the superjumbo which some believed was the future of air travel. But it’s not an end for this engineering marvel

Make no mistakes about one fact: Airbus A380 is an engineering marvel, a plane unlike any other that mankind has ever produced. A fully-loaded Airbus A380 weighs 575 tonnes and the very fact that such heft can rise off the ground seems to defy the very law of physics. As someone who professes to be an aviation geek, every time this writer sees an Airbus A380, he feels rather awestruck. Flying on one of these aircraft is an amazing feeling. True, this writer admits, that the older Boeing 747 certainly looks more graceful with cleaner lines and in some paint jobs, is absolutely stunning. While the A380 is undoubtedly a remarkable feat of engineering, it is not what one would describe as a “looker.” But as the European aircraft manufacturer, Airbus, announced that it is about to pull the plug on producing A380 by 2021, one felt a bit sad. In fact, it was an irony that Airbus announced the impending closure of the A380 line just as when Boeing 747 celebrated the 50th anniversary of its first flight. Indeed, the old queen might even outlast the behemoth on the production line as demand for Boeing 747 freighters has kept up slow with steady production.

But that does not answer the question as to why Airbus A380 failed in the pile of Airbus’ marketing hubris? Part of the answer is Airbus’ own manufacturing issues around the plane. Given the way Airbus is structured — it is a pan-European company with factories across France, Germany, Spain and the United Kingdom — different sub-assemblies of the aircraft were brought from different parts. This is standard practice for Airbus, which ferries fuselage sections between France and Germany and the wings are brought from Wales on a fleet of outsize and specialised airborne freighters. This works fine for the Airbus’ money-maker, the A320 family of narrow-body planes that power low-cost travel across the world, but A380 is a different scale. Even sub-assemblies are so huge that they have to be brought in on river barges and on oversize trucks through narrow passages. In order to keep various nations of the consortium happy, this was needed instead of the more logical solution of making everything at one place.

Of course, this is a logistical issue and even Airbus’ American rival, Boeing, went down this route when it came to Boeing 787 Dreamliner, which sees its parts flown from all over the world and across oceans on modified Boeing 747s. Logistical issues can be dealt with but engineering problems are a lot tougher and Airbus’ engineers made a huge mistake when they used two different versions of the same 3D modelling and simulation software to design the plane. While one may think that two different versions of the same software might not be a critical issue, think of it more on the lines of operating systems like Windows and MacOS. Things were completely incompatible and when translated into the real world, it meant that wiring harnesses and floor panels did not quite align perfectly.

For very good reasons, aviation is a safety oriented industry. Jugaad solutions elevated in India cannot work in a safety-oriented environment and fixes had to be made. Particularly, when you consider that Airbus A380 has over 530 km of wiring, this wasn’t easy at all. Although much of the wiring was not flight-related as Airbus managed to produce and fly prototypes by 2005, the wiring was essential for creature comforts of passengers for things like lighting, entertainment systems and for galleys  where the food is prepared. While A380 was certified as a perfectly capable flying machine by the end of 2006, albeit with almost a year’s delay, deliveries were nowhere on the horizon.

Slippages happen on many major engineering projects — whether they are in civil, software or an aircraft. Even Boeing suffered multi-year delays on the 787 Dreamliner because it did not anticipate the scale of problems that it would face while moving  from aluminum to carbon fibre. But delays also give buyers a second thought. When Airbus launched the A3XX, as it was called in 2000, it was surrounded by too much hype — it was this big, new, shiny aircraft that airlines just had to have. Think of it like when a car company launches a new product, the marketing machine hypes it up and even manufactures a case for one to buy that car. This was the case with airlines and A380. But if there is any delay, and there are minimal or no penalties for cancelling the order, airlines began, like normal consumers would, to sit back and think about the order.

Airbus’ logic was that A380 would be a perfect replacement for Boeing 747 and would continue with the airline’s policy of flying from one major city to another from where passengers could take connecting flights to their onward destinations. A few years, ago when one wanted to travel from New Delhi to Madrid, for example, he/she would have to fly to a major European hub, such as Frankfurt or London, transit through a massive airport while sleepy or dragging a child and then connect to a new plane. But that sort of travel vanished quickly, partially thanks to Boeing 787 Dreamliner; although the change had begun a few years before the Dreamliner entered production. Because twin-engined aircraft are so much more efficient and easier to maintain — their smaller size being perfect for what airlines call ‘thinner’ routes where demand is more limited — it can easily fit in a plane like Boeing 787 and this is what started happening. Today, for example, one can fly directly between New Delhi and Madrid on a Boeing 787.

Then there was another problem: Boeing 777 and Airbus’ new A350 aircraft, whose larger versions can carry almost 80 per cent of the Airbus A380’s load in terms of passengers and cargo, could do so at half the cost. Airbus A380 is a big, large plane with four engines while others are smaller (only just) and have just two engines. This in itself makes it more efficient. So, for the same cost of operating one A380, airlines could operate two flights on a 777 or A350, carrying half as many additional passengers. Also, these new planes could fly very far. While a flight between Mumbai and New York would have meant a stop or two a decade ago, today, there are two non-stop flights between the two cities. The same reason is also applicable to Boeing 747, whose latest passenger version has also stalled on the sales front. But since Boeing 777 and 787 are doing so well and because the latest version of 747 was a cheaper (relatively speaking) re-engineering job than the estimated $25 billion that the A380 cost to develop, it survived.

For sure, the end of production of Airbus A380 will not mean that the plane will stop flying. In some slot-restricted airports, such as Heathrow Airport in London, where one can see multiple A380s from different airlines, it will continue. Also Dubai’s Emirates airline, which is the largest operator of the plane with 110 flying and most of the remaining 20-odd deliveries going to that country, will continue to be a huge operator of this plane as that airline builds up its massive hub policy. It is very likely that some later-built A380 aircraft will easily fly on till 2030, so there is no rush to get on a A380 just yet.

In fact, Emirates flies A380 into Mumbai and Lufthansa and Singapore Airlines fly the beast into New Delhi. All the three airlines are expected to fly these aircraft into India in the foreseeable future. That said, as someone who has flown on the big plane, on demonstration flights when Vijay Mallya had brought one to India for the longest-scheduled A380 service in the world between Dubai and Los Angeles, and experienced the wonderful bar at the end of the upper deck, flying on this plane is an experience that one must put on his/her bucket list.