Why Cong owes an answer

Why Cong owes an answer 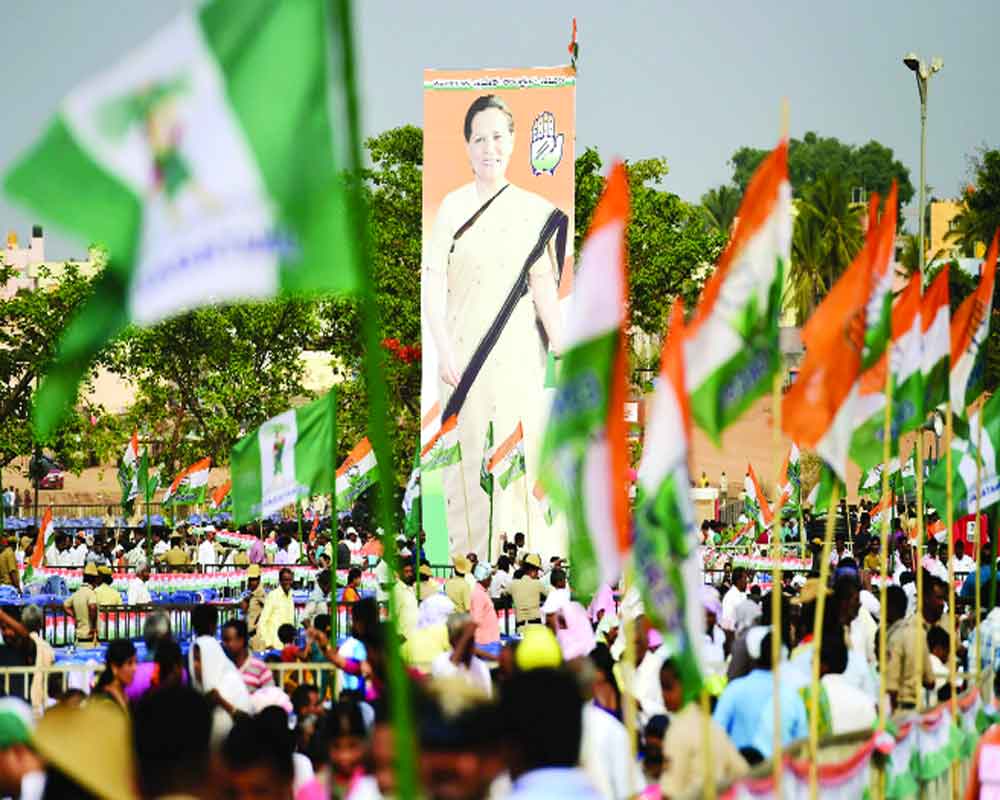 The Congress minus Sonia-Rahul-Priyanka is thinkable but Indian politics without it is unthinkable. The grand old party may be critically weakened but not wrecked as yet

Political parties are central to the functioning of a representative democracy because a multi-party system generates different policy options for the public. The options thus considered are aimed at fulfilling the interests and aspirations of the electorate. The Opposition, especially inter-party coalitions, is a key concept in a liberal democracy. However, interestingly, political parties have one function in common: All of them seek political power to form a Government or to take the role of the Opposition.

The 2019 Lok Sabha elections are over. While the Bharatiya Janata Party (BJP)-led National Democratic Alliance’s (NDA’s) roaring success in both 2014 and 2019 parliamentary elections has made it the largest party, the Congress has been facing debacle after debacle in successive elections. In this year’s general election, the BJP won 303 seats and along with its allies, the NDA took its tally to 352 seats. The United Progressive Alliance-led Congress was reduced to 91 seats with it barely crossing the half-century mark with 52 seats. With the BJP’s winning percentage reaching 70 per cent (it contested in 437 seats and won 303 of them), the main Opposition party, the Congress, stared at a major existential crisis. The BJP’s spectacular win has left the Opposition, the Congress in particular, weak, clueless and irrelevant.

But why is the Opposition so significant? Its importance lies not just in providing a means to express negative reaction to the Government’s decisions but to also tirelessly hold the ruling party to account, offer constructive criticism and project a progressive alternative to the Government. On this front, the Congress lacks comprehensive strategy and stamina to take on the might of the BJP’s power duo of Prime Minister Narendra Modi and Home Minister Amit Shah.

It’s true that people are often accused of seeing the world the way they want it to be rather than how it is. But do we really need  binoculars to see the fall of a once great political party? Leaders from the top-level to the low-rung as well as legislators have been quitting the Congress. The prominent among them are airing their views against the party line. Indications are also there of deep intra-party disputes and conflicts. On a close look, however, one will find the real reason why the leaders took the decision to leave the party/air views. And it wouldn’t be surprising for those who have a grasp of the reality.

Last April, I had mentioned in an article titled, Congress Needs to Make a Comeback for Democracy to Sustain Itself: “In the world’s largest democracy, the shrinking political space of a 133-year-old national party is as disconcerting for the party as it is for democracy itself. And, therefore, the Congress’ revival is crucial for the nation and challenging for its party leadership. The task is made tougher as sub-optimal leadership faces the task of rebuilding the party and restructuring its shattered image and appeal.”

One and a half years later, the Congress’ state of affairs is even worse than what people had feared. I had earlier explained the to-do list for the grand old party, which remains prerequisite till date.

Change is as constant a feature in politics as it is in life, it is said. Those who resist such a change will find themselves pushing against a sea of opinion and positioned on the wrong side of history.

Most relevant for present-day Congress is an observation by Mohammed Ayoob, Professor, Michigan State University, who writes that even after two major electoral debacles, the dynasty refuses to give up control and deliberately fails to realise that it is destroying the chances of the Congress bouncing back. The equation of the party with the family has destroyed any possibility of its renaissance.

Buoyed by its stupendous victory in this year’s parliamentary elections when the BJP is gearing up for the 2024 general election, targetting 333 MPs, the Congress is seen as a small, snivelling, struggling party. As a matter of fact, the Congress’ decline began years ago but accelerated in 2014 with the election of Narendra Modi.

It’s not that the BJP-led NDA Government is running flawlessly. Apart from the economic mess, the political culture born out of the personality cult, ultra-nationalism and hate politics concerns the common man the most. Besides, the Government has failed to address other critical issues: From agrarian distress to unemployment to dissatisfaction among the urban middle classes and the poor. India’s rank in the Global Hunger Index (GHI) has slipped further — from 95 in 2010 to 117 this year.

So, for the Congress, there are enough political opportunities. It’s just about how to make an opportunity fit, not the other way around. It’s about seizing opportunities in right earnest and at the right time.

By giving the reins of the party again to a family member, the Congress might have arrested disintegration within but it will commit a grave mistake if it thinks that it can emerge stronger anytime soon. The party leadership must recognise that something far bigger and deeper is at work in the intra-party realm of politics. In the prevailing political culture, for the Congress, if it wishes to be an alternative to the BJP, even disintegration would be a better option if a wider acceptability of the younger generation eludes the party rank and file.

INC, minus Sonia-Rahul-Priyanka, is thinkable but Indian politics minus the Congress is unthinkable and if indeed it happens, it would be sad and may be the most unfortunate turn, which may forever change who we are. The Congress may be critically weakened but it is not wrecked as yet.