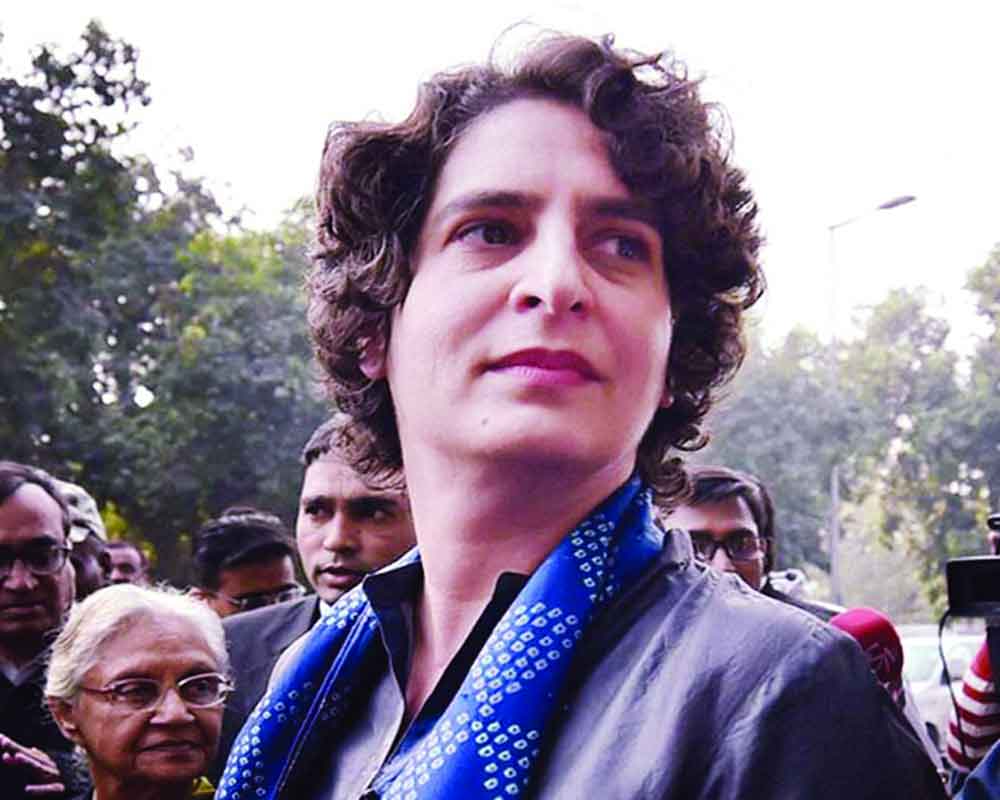 The Congress has put on hold all talks about pre-poll alliances for the 2019 Lok Sabha Elections, for the time being. Sources in the party say discussions will resume after the Budget Session, by when the BJP’s alliance scenario will also be clearer. The BJP is trying to forge tie-ups in many States, but without much success, which is why the Congress has also stopped working in that direction. Sources say the Congress has changed its strategy after Priyanka Gandhi’s plunge into active politics, and is biding its time to see the effect of its latest move. Priyanka is expected to take charge as the party’s General Secretary on February 4, and will then address a join press conference with Rahul Gandhi in Lucknow. The Congress leaders are of the view that Priyanka’s entry will create a buzz in the political arena and the party will reach out to possible allies after gauging people’s reaction towards Priyanka. In fact, the Congress wants to exhibit Priyanka’s popularity in front of probable allies.

Till now, almost all allies of the Congress have reacted positively. The National President of the Samajwadi Party, Akhilesh Yadav, has openly praised the decision of the Congress, and congratulated Rahul. A major impact of the decision is that Tejashwi Yadav is saying what the DMK’s Stalin had been saying till now. So, the Congress believes a positive environment is being created for the party. Although, the party is still waiting for a reaction from Mamata Banerjee and some other leaders. If leaders like Mayawati, Mamata, and Arvind Kejriwal take this well, then the Congress can start afresh. There was news that the Congress has already finalised its alliance in some States, such as Maharashtra, Bihar, and Jharkhand. But the truth is that the party is only meeting various leaders and preparing for elections.

Is there a secret consensus between the Congress and Samajwadi Party?  Akhilesh Yadav’s positive reaction over Priyanka’s entry into politics has surpassed any other political reaction so far. He has shown full support for Rahul and Priyanka. That is why it is being said that though the Congress is not a part of the SP-BSP alliance in UP, Rahul and Akhilesh might reach a hidden agreement for some of the seats and keep in mind each other’s interests at the time of selection of candidates. If this happens, the BSP will face a big loss.

Sources say the Congress firmly believes that the SP can transfer some votes to the party. Yadavs are in full support of the SP. Muslims are also with the SP, but they are the common vote bank of the SP and Congress. It is being said that the SP leaders think it is better to strengthen the Congress vis-a-vis the BSP. They think that if the BSP strengthens its position, it could pose problems at the time of seat-sharing in the Assembly Elections. On the other hand, Yadav voters are still not confident about the BSP.

So, there is still a possibility of indirect or behind-the-curtain alliance between the SP and Congress. The Congress claims around 10 seats as its stronghold, and some of these seats will go to the SP. Barring Raebareli and Amethi, the other A-grade seats for the Congress are Jhansi, Prayagraj, Padrauna, Sultanpur, Kanpur, Muradabad, Saharanpur, and Farrukhabad. Apart from these, the Congress is also eying Barabanki, Lucknow, and Ghaziabad seats. For these seats, an agreement can be reached between the SP and Congress.

There is no way the Congress can have the same relationship or agreement with the BSP as it does with the SP. In fact, the Congress leaders are of the view that a large chunk of the BSP’s core vote bank, ie Dalits, will automatically come towards the Congress. At the same time, wherever Muslim voters will have to choose between the Congress and BSP, they will pick the Congress as they don’t have much faith in Mayawati’s party. Muslim voters think that after the elections, the BSP might either extend support to the BJP or take support from it.

That is why it is being said that Mayawati finds herself in a tricky situation after Priyanka’s recent political foray. She thinks that her Brahmin and Dalit vote bank might shrink and could go to the Congress. In that case, Mayawati will be left nowhere as Muslims have not believed her much at any point of time. So some say Mayawati’s problems have gone up, and to solve them, she wants to talk to Akhilesh. Sources say Mayawati will talk to Akhilesh once Priyanka starts her campaign. In fact, Mayawati wants to see people’s response to Priyanka’s campaign.

On the other hand, Mayawati must be aware of the secret agreement between the SP and Congress. She will definitely talk about that as well and then both parties might discuss about including the Congress in their alliance. In the present scenario, if the Congress fights alone, the BSP will be the biggest loser as the Congress will only dent its vote bank. The Congress will focus on Muslim voters of Western UP, which is the stronghold of the BSP. The Congress will almost certainly clinch most of the seats of the region with the SP’s help.

The Chief Minister of Delhi, Arvind Kejriwal, has alleged that names are being selectively removed from electoral rolls, which is a direct attack on the Election Commission. He claimed names of AAP supporters are being ticked off the voter list. Similar allegations have been levelled by Leader of the Opposition in Andhra Pradesh and the YSR Congress chief, Jagan Mohan. Jagan said the ruling TDP is removing the names of his supporters from the voters list. Though this is almost impossible to prove, if particular castes or the supporting areas are identified and names are removed, then it can prove damaging for the Opposition parties.

Contrary to these allegations, in Madhya Pradesh and Rajasthan, the Congress had earlier alleged that the Government was adding extra names in electoral rolls. The party had complained to the EC against the then BJP Government in both States. The EC had looked into the matter and removed many names. Though the Congress had complained about 30-40 lakh “extra” names, the names removed were far from the figure.