Word duel for UP

Word duel for UP 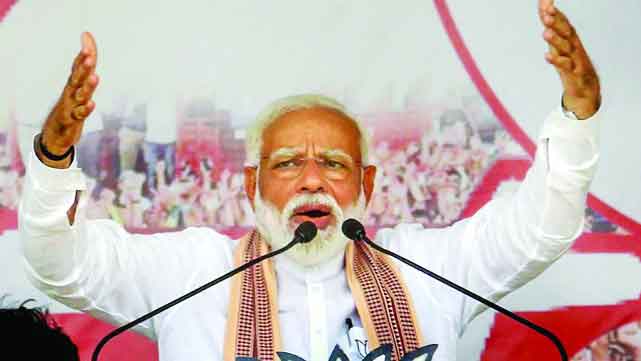 By attacking Mayawati, Modi hopes to split the dissension within the BSP in UP and dent the Opposition alliance

The recent sparring between the Bharatiya Janata Party (BJP) prime ministerial hopeful Narendra Modi and Bahujan Samaj Party (BSP) supremo Mayawati over Dalit atrocities indicates why this disadvantaged section will continue to be considered only good enough as a votebank, the USP of its otherness far bigger than that of its compositeness. So it is that Modi called out Mayawati for being in a tacit electoral understanding with the Congress despite the gangrape of a Dalit at Alwar in Rajasthan — a State ruled by the Congress — and not feeling outraged enough to pull it up or withdraw support to the State Government. Mayawati retorted, reminding him of his misplaced morality when it came to the assault on Dalit youths at Una in his home State of Gujarat. And it ended in a competitive tussle of trading charges over who was the better champion and protector of human rights and whose ethics were diluted by convenience or strengthened by conviction. One would wonder why Modi chose to rile up Mayawati at a time when his government’s tenure has actually seen a spike in Dalit violations. Be it the case of Rohith Vemula, the beating of Dalit youths at Una in Gujarat, the demolition of the press of Babasaheb Ambedkar, the riots in Bhima Koregaon or the reinterpretation of the SC/ST Act, this community has had more reasons to be agitated with the BJP than Mayawati’s sluggishness. In fact, in Maharashtra, which has 48 seats in the Lok Sabha, Ambedkar’s grandson Prakash Ambedkar has been leading a convincing charge against the current regime and is spearheading a renewed movement for legitimacy. But with Mayawati’s own declining fortunes in the north, with no MP now and barely 19 MLAs in the Uttar Pradesh Assembly, Modi has probably found an easy soft target. Despite the Dalit outrage, he seems to be drawing sustenance from the BSP’s falling vote pie and BJP’s doubling the share in it in 2014. Considering nearly a fourth of Dalit voters voted for the BJP back then, Modi believes that he can still chip away at the Dalit base as welfarism and increased opportunities have meant the ascension of the educated youth and the upwardly mobile among them. This same category had in 2014 bought into the idea of Modi’s development and economic growth. This migration of the Dalit vote has cost the BSP chief badly as she is left only with the most backward among the community. The second reason for Modi’s attack on Mayawati probably is easily attributable to vote-catching traps in Uttar Pradesh, where the mahagathbandhan has really taken shape with her bending backwards to align herself to the common cause of entrenching her relevance along with that of the Samajwadi Party (SP) and the Rashtriya Lok Dal (RLD). So the BJP is trying to shatter her base there further by playing on anxieties and insecurities of sub-groups within the Dalit basket. It has quite successfully propagated that the BSP is prioritising the interests of its dominant Jatavs over non-Jatavs, a sub-caste that the BJP has nurtured and amassed to its side. By attacking Mayawati, Modi hopes to split the internal dissension within the party and dent the Opposition prospects.

The Dalit vote is critical for the BJP in the heartland States where it had swung towards it the last time. But after Rohit Vermula’s suicide and the attacks in Maharashtra, it is the new-age Dalit voter who is questioning his/her choice and is at the forefront of new assertive agitations. However, it is still scattered and for all practical purposes, Mayawati is still the pan-India face for the Dalit movement. Attacking Mayawati for failure to stand up for the Alwar rape, therefore, is a calculated ploy to hurt her image as a worthy champion of rights and depict her as a number-hungry politician. If not in Maharashtra, then the BJP feels at least this derision of Mayawati could work in Uttar Pradesh. As for Mayawati herself, with an organisational matrix in tatters, she is finding it difficult to swing the rising discontent among Dalits in other States. That is why she is trying for alliances, like she did with the Janata Dal (Secular) in Karnataka and the Indian National Lok Dal in Haryana. Probably, she could escalate Modi’s diatribe as one of hurt pride and attempt a fightback.