Yes to reservation, no to women

Yes to reservation, no to women 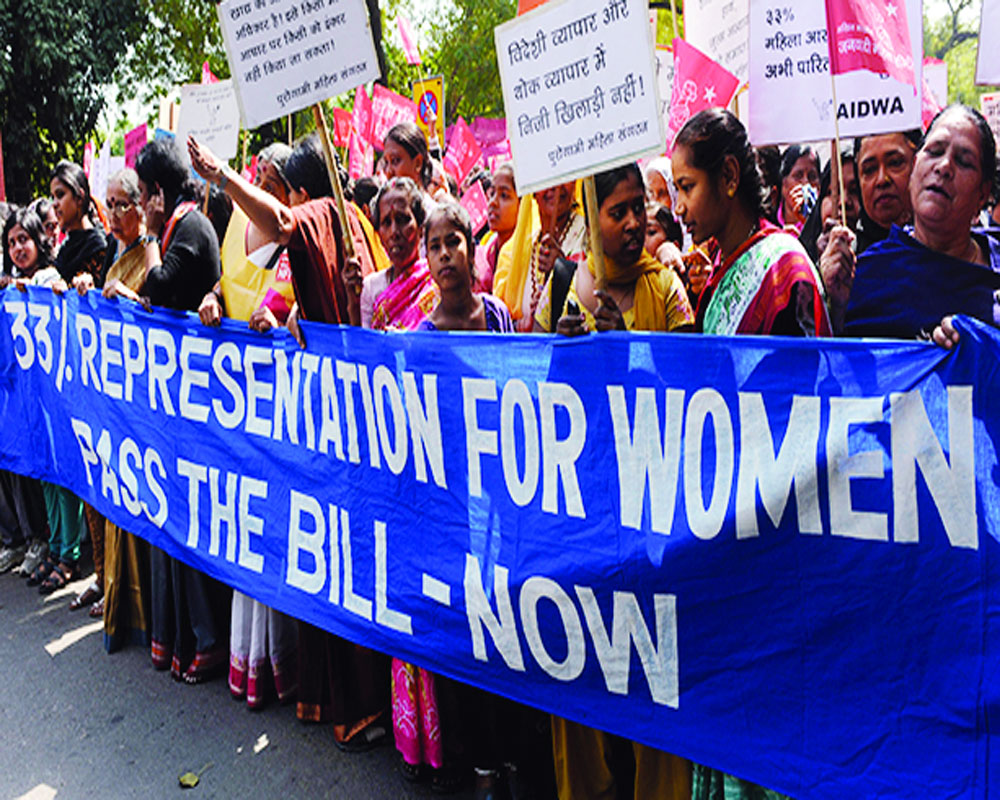 Even as the Government is hastily drafting the quota Bill for the EWS section, like most predecessors, it has orphaned the Women’s Reservation Bill

The recent Bill, reserving 10 per cent quota for the economically weaker sections (EWS) among the upper castes has been intensively debated over its utility, propriety and Constitutionality but discussions have roundly ignored the group that has once again been given the short shrift in prioritising the policy of reservation. The obvious reference here is to the Women’s Reservation Bill or the Constitution (108th Amendment) Bill of 2008, which seeks to reserve 33 per cent of the seats in Parliament and all State legislative Assemblies for women. Although the Bill was passed by the Rajya Sabha in 2010, it is still not a law as the Lok Sabha is yet to ratify it.

The Bharatiya Janata Party (BJP) had in its 2014 election manifesto promised to ensure its passage as part of its commitment towards women’s empowerment and welfare. In fact, in a chapter titled, ‘Women — The Nation Builders’, the BJP’s manifesto had highlighted the crucial role of women in the development of society and growth of the nation. It had claimed that one of its first tasks on assuming power would be to ensure one-third seats would be reserved for the women in both Parliament and Assemblies. This commitment, forgotten through almost the entire tenure of the Modi Government, has ostensibly lost out to political exigency and the need to appease a significant section of the electorate ahead of a ‘do-or-die’ election.

While the jury is still out on the actual benefits of any reservation policy for intended beneficiaries, there is widespread consensus that an affirmative action to empower women, politically, does yield desirable results. And there is data to back this belief. With less than 12 per cent representation in Parliament, as compared to a corresponding global average of 22.4 per cent, Indian women trail their counterparts in many parts of the world.

While Nordic nations lead the way with an average of 41.5 per cent, as many as 42 countries in the world have 30 per cent or more women MPs. Among these, Sweden leads the way with 50 per cent reservation for women. It is not a mere coincidence that these nations are symbols of not only economic prosperity but also progressive social policies. Many others such as Rwanda (30 per cent), Nepal (28 per cent), Pakistan (20 per cent) and Bangladesh (13 per cent) have quotas for women in Parliament. Even sub-Saharan Africa has an average female representation of 22.6 per cent in Parliament.

Research published by the United Nations University World Institute for Development Economics Research (UNU-WIDER) in May, 2018, found that Assembly constituencies in India helmed by women representatives show significantly higher economic growth than those under men. Based on data for 4,265 State Assembly constituencies across four election cycles spanning the period 1992-2012, the authors of the study found that women legislators in India enhance economic performance in their constituencies by about 1.8 percentage points per year, more than their male counterparts. The study also noted women’s efficiency in creating vital infrastructure, especially because they are less likely than men to succumb to corruption, temptation for self-aggrandisement and criminal tendencies.

These figures are substantiated by another 2017 research study by Guilhem Cassan, University of Namur, Belgium, and Lore Vandewalle, The Graduate Institute of International and Development Studies, Geneva. Using two data sets collected by the National Council of Applied Economic Research (NCAER), the 2005-06 edition of the Rural Economic and Demographic Survey (REDS) and the 2011-12 edition of the India Human Development Survey (IHDS), Cassan and Vandewalle document gender norms in variations across castes and how mandated political reservations for women lead to path-breaking changes in their lives.

The REDS data from rural India, which lists respondents’ preferences for public goods such as water, sanitation, roads and electricity, shows that gender quotas enable women to rise to the position of president in gram panchayats — 95.4 per cent of the presidents in gram panchayats reserved for women were female. The IHDS data, on the other hand, provides quantitative evidence of restricted mobility and stricter gender norms among high-caste women, underscoring the need for policy to bring more women into the political mainstream.

In an Employment Policy Paper of 2017 on MGNREGA and its impact on women, the ILO, too, highlighted the gender dynamics of affirmative policies. Using both waves of IHDS data (2004-05 and 2011-12), it shows that work provisions under MGNREGA have helped shift social and economic outcomes in favour of rural women engaged in wage labour, thereby contributing to transformative equality.

Coming back to the quota Bill for the economically backward upper castes, unlike gender-based findings, there is no substantive evidence that preferential treatment based on financial status has the desired effects. While assessing the redistributive effects of affirmative action on poverty in 2010, which they claim is the first such study, Aimee Chin and Nishith Prakash of the National Bureau of Economic Research aver that policies aimed at improving socio-economic outcomes for poor sections are not only highly controversial but also inconclusive in indicating any real benefits. “It remains an open question whether affirmative action policies successfully reduce poverty,” they concluded.

Significantly, a major roadblock in putting the new quota into effect on the ground could be the legal tangle. In the 1992 Indra Sawhney judgement by the Supreme Court, a majority (six) of the nine judges on the Bench averred that economic criteria cannot be exclusively used for deciding on reservation. The court consequently barred such reservations based on poverty alone, arguing that social and educational backwardness should also be addressed to counter the historic injustice faced by several generations of the country’s population — here again women literally fit the Bill.

Irrespective of its eventual denouement and fate on the legal front, it is clear that the hastily drafted quota Bill, which arguably has little data to support, has the weight of the Modi Government behind it; whereas the long-pending women’s reservation Bill, which is rooted in extensive research, remains the orphan that nobody wants to adopt. Does this indicate another opportunity lost, both for redemption of past neglect and for improving the metrics of performance in a nation riddled with low-performance outcomes?

(The writer is, Editor at the National Council of Applied Economic Research. Views expressed here are personal)