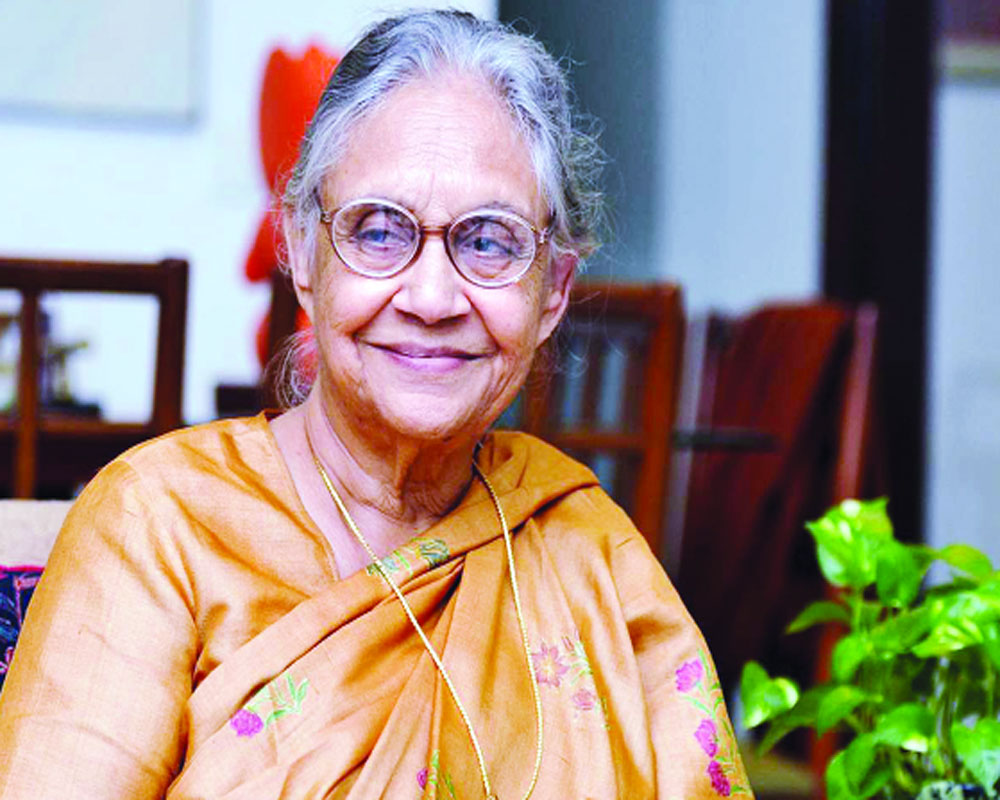 Elections are also much about chemistry than arithmetic. Given that she certainly has a past history of working magic with Delhi, her big challenge will be consolidation of votes

The first thing that 93-year-old Mahathir Mohamad said when voted back as Malaysian Prime Minister was, “Yes I am alive…and the country’s youth voted for me.” The grand patriarch’s return by an electorate, 40 per cent of which is young, was an endorsement of his past experience as a robust builder who had made modern Malaysia as the world knew it, enough to overlook the ghosts from his past. Voters may not have forgiven his autocratic and monolithic ways of functioning but realised he was still worth placing a bet on for the greater good. This analogy perfectly fits the return of former Delhi Chief Minister Sheila Dikshit as president of the state Congress to steer it in mission mode for the general elections.

Yes, she is 80, in good health having recovered from her heart condition, and is back in the familiar saddle. Of course, she has the “Mahathir” advantage if one may call it that. Having been the Delhi Chief Minister for 15 years, winning three rounds of elections between 1998 and 2008, she is undoubtedly responsible for reshaping Delhi as a world capital with her brand of development politics. In fact, much of the template of Delhi’s governance has frankly been reset by her. Whether it is road safety, which she pioneered with the “wear the seat belt” campaign, clean air, which she committed to by changing the city’s traffic fleet to CNG, the engagement and stakeholdership with locals, which she started with the Bhaagidari scheme, prioritising education in government schools and improving their performance, cleaning up the city and taking advantage of the Delhi Metro’s progress, she did give the city a reloaded version of the post-Asiad makeover. Her grandmotherly image cut across sections of society. To the lesser privileged, she appeared as one they could commiserate and share their burdens with, to the upper crust, she was the erudite thinker who could rationalise her priorities and to the young, she was the aunt who could be trusted to address their concerns and more importantly, had the farsightedness to factor in their future. And despite the faction fights and competitive voices in her party unit, she did manage to hold it all together. Even earn a tacit acknowledgement from the Opposition parties then. Whatever the shortcomings in her last term, it is this legacy that has held her in good stead, enough to be called back to the only political turf that worked for her.

Track record shows she could do it with elan. While current AAP Chief Minister Arvind Kejriwal laments how his hands are tied in executing his vision and his public spats with the LG are common knowledge, Dikshit wrapped her head around partial statehood issues with equanimity. She conducted herself without making a public spectacle of her problems but working within limitations. As she writes in her memoirs, “This cumbersome process of requiring so many levels of approval was unique to Delhi. But the bottomline was that full statehood or not, to the people of Delhi, the Chief Minister signified the face of governance. They would not have much patience for a chief minister trying to explain an underwhelming ‘report card’ by enumerating all the areas that fell outside her jurisdiction. There are two ways of dealing with such situations. One can throw up one’s hands and say it is impossible to perform under these circumstances or negotiate one’s way through innumerable minefields in the belief that the primary aim is to deliver on the promise of governance.”

True, Dikshit had not seen success as a politician in UP, where she was aided by her illustrious father-in-law and veteran Congress leader Uma Shankar Dikshit. But the aura never worked for her electorally. Till she sought to rescue it in 1998 with Delhi. Within the state unit, she had to do a tough balancing act with several aspirant leaders. Many claimed that she survived because she had the party high command’s endorsement and never quite heeded the grassroots cadre. But even that relationship, though some might have taken for granted, has had a rocky run with highs and lows. Yet Dikshit was able to get beyond her gubernatorial assignments post-defeat and find her way back to relevance, with the party naming her as chief ministerial candidate for the Uttar Pradesh polls. But sensing she could be a scapegoat here given the Congress’ dismal voteshare and saffron tide, she was wise enough to bow out of the race. This time she has the trade winds in her favour. The recent victories of the Congress in the Assembly elections in the three crucial heartland States have proved again that leaders with a depth of grassroots experience, deft political management and readiness to plunge deep can deliver the goods. Even make the Young Turks sit up and take notice. Besides, Dikshit has an added advantage. Delhi voters, tormented by the endless power tussle between the AAP government and the Centre, are now tired of the stasis when it comes to civic issues plaguing the city. Many neutral voices have even compared the present scenario with the better times of Dikshit’s Delhi. So she has an edge in perception, something that she had worked on in the early years with deft media management.

This time, Dikshit too refuses to be a foregone conclusion and is itching to claim her relevance. But there is the shadow of corruption charges over the conduct of the Commonwealth Games during her regime. And had it not been for the scale of the scam, where Central party leaders like Suresh Kalmadi were directly implicated while she managed to stay inside the ring of fire without singing herself too much, Kejriwal would not have spiralled to legitimacy the way he did. Little wonder then that soon after the announcement of her anointment as Delhi Congress chief, Kejriwal raked up her tainted past, saying the party clearly had a “leadership deficit.”

However, Dikshit is up for the challenge. Yes, there’s the Kejriwal barrage, his claims of slum development and reducing power bills, but the more important one is tying up the party together. Present party president Ajay Maken may have bowed out citing ill-health and publicly given her the vote of confidence but Dikshit’s job will be to keep him in the scheme of things, considering he did helm the party during troubling times and solidify an anti-AAP narrative. She needs him and other stalwarts to pull up the Congress votebase, make an electoral difference and at least get a bargaining advantage.

There is a lot of talk in the power corridors about Congress and AAP having a broader understanding to defeat the BJP in the Lok Sabha polls. Maken has been a known opponent of this formula for short-term gain and hates risking a long-term revival of the party. And though many predict that Dikshit has been brought in to ease this arrangement, considering the combined voteshare of both parties can indeed squelch the BJP for Lok Sabha, she herself has been blowing hot and cold over AAP given her own tumultuous history with it. However, she is known to fall in line with the high command and given the AAP’s irrelevance outside Delhi and the resurgent Congress in states, this may not yet be a priority.

Dikshit’s big challenge will be consolidation of votes. Can she break into the larger community of businessmen, traders and Poorvanchalis, which is strongly in the BJP’s grip? Can she, most importantly, win back the crucial Dalit and Muslim votes, which have happily migrated to the AAP? Can she “broom” them back and become the mohalla queen? If we go by the 2017 municipal polls, AAP’s vote share is down to 26 per cent while the Congress is up to about 22 per cent. But elections are also much about chemistry than arithmetic. And Dikshit certainly has a past history of working magic with Delhi.

Besides, she is not alone in surviving and winning. Octogenarians around the world, from politics to performing arts, are delivering and still going strong. So much so that trend forecasters are wondering if 80s are the new 40s for 2019.