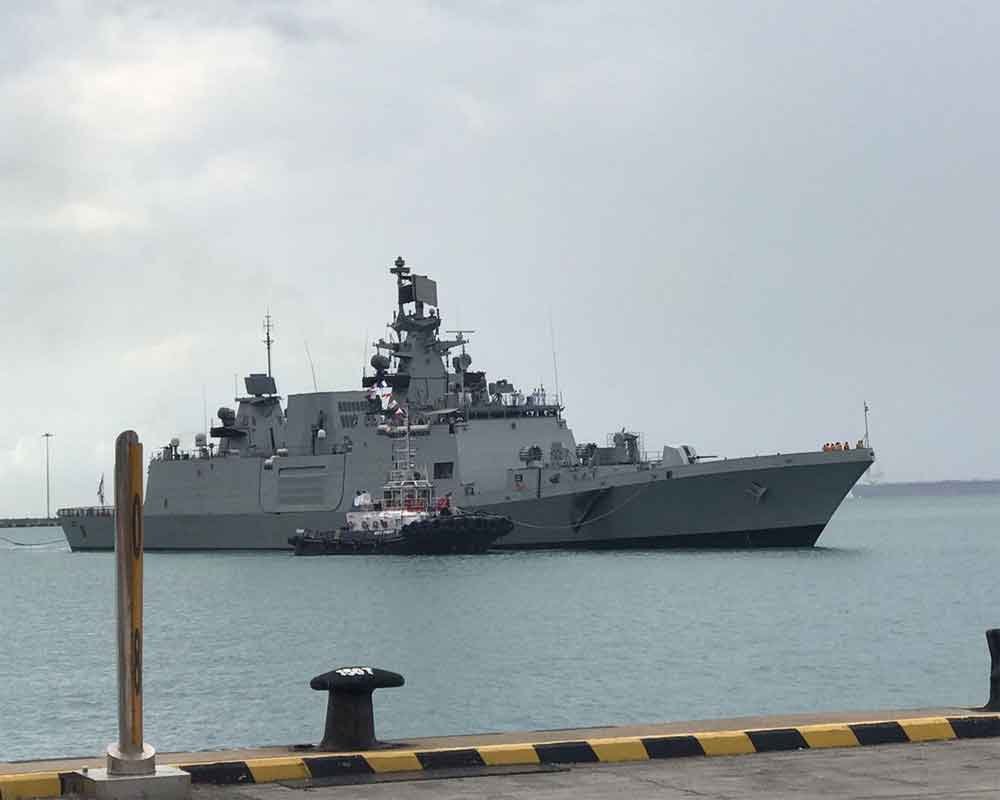 Two warships of the Indian Navy--INS Kolkata and INS Shakti--are participating in a three-day Asia Pacific naval and maritime event being held here, according to an official statement.

The International Maritime Defence Exhibition Asia (IMDEX Asia-2019) commenced on May 14 and will also witness the participation of some of India's leading engineering and ship building firms, including Larsen & Toubro and BrahMos, which makes the state-of-the-art air, sea and ground launch cruise missiles.

INS Kolkata is an advanced stealth destroyer capable of engaging multiple threats from the air, sea and underwater and has been designed and built in India.

INS Shakti is a fleet support ship to provide fuel, provisions and munitions to warships at sea.

Following IMDEX, Indian Naval ships together with an Indian Navy surveillance aircraft P8I will participate in the 26th edition of Singapore India Maritime Bilateral Exercise (SIMBEX) scheduled from May 16 to 22, 2019.

SIMBEX is the longest uninterrupted naval exercise that India has with any other country, the statement said.

“Regular participation by the Indian Navy in the IMDEX and SIMBEX reflects the importance India attaches to the exercises and the broader strategic partnership with Singapore and it also reaffirms our Act East Policy,” it said.

The 26th SIMBEX is taking place 6 months after the last edition that took place in the Andaman Sea and Bay of Bengal from November 11 to 21 last year.

It involved live weapon firings and complex military maneuvers, including those of aircraft and submarines.

The Indian Army and the Singapore Army recently held their 12th edition of the annual exercise Bold Kurukshetra, an annual joint training exercise for Armoured Units from April 8 to 12, 2019, at the Indian Army training facility at Babina in Utta Pradesh, the statement said.

Likewise, Air Forces of both countries will exercise together later this year in India, it said.

India and Singapore share a strong and rapidly growing defence relation which is the key pillar of India Singapore strategic partnership based on deep mutual trust and goodwill and shared interest in rules based order, maritime security and an open, inclusive and peaceful Indo-Pacific region.