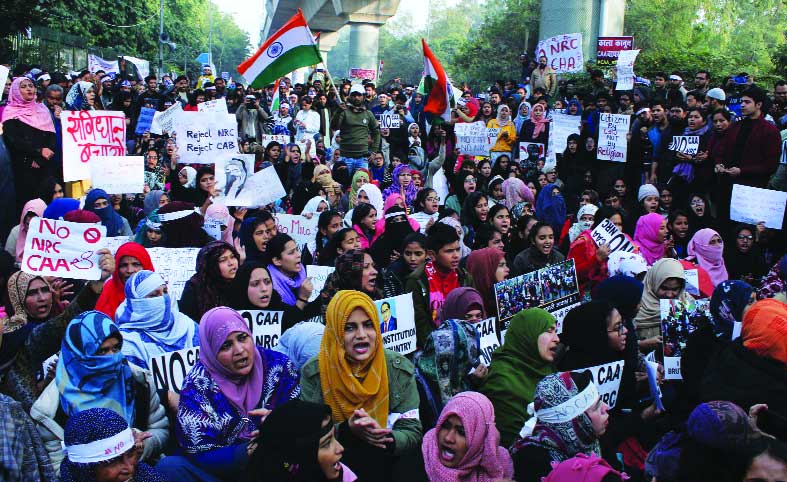 The national Capital on Saturday witnessed multiple peaceful protests throughout the day. The situation in Old Delhi and Seemapuri areas which were hit by violence during protests against the Citizen Amendment Act (CAA) saw heavy deployment of security personnel in the area.

Thousands of students of Jamia Millia Islamia on Saturday staged a demonstration yet again outside the campus.

The protesters were joined by women, Jamia alumni and local residents. Some protests against the CAA were also observed at India Gate, Jantar Mantar and Rajghat.

“Police had detained five outsiders from the neighbouring areas of Seemapuri. Subsequently, they were arrested. Six more persons were also arrested on charges of rioting, causing damage to public property and using force to deter police personnel from performing their duty,” said the senior police official.

Police said all the 27 accused were produced in court and the court has sent them to 14 days judicial custody.

On Saturday, the area surrounding Jama Masjid, where a large number of protesters gathered on Friday evening, was also quiet and businesses ran as usual. Manish Seth, secretary of Daryaganj Traders’ Association, said all shops in the area opened on Saturday morning and there’s no unrest. He said police have been keeping a tight vigil.

A bookseller near Delhi Gate, where a car was burned on Friday evening as protests turned violent, also lamented the ill-effects of the contentious citizenship law, saying people were not to be blamed for the agitations. “If I tell you I will take away your home tomorrow, and you know I am capable of doing it, will you sit quietly? Violence is not the answer to anything, but you cannot expect people to not be upset when their future is uncertain,” he said.

Meanwhile in Seemapuri, where the Additional Deputy Commissioner of Police (DCP), Rohit Rajbir Singh suffered minor injuries after protestors turned violent on Friday, police said that they arrested 11 people for the violence. A senior police officer from Shahdara district said situation was under control in the area. “Delhi Police personnel have dominated the area and are conducting flag marches since Friday evening to ensure that no untoward incident is reported,” the police officer said.

In order to ensure that the situation remained under control, the police conducted flag marches in northeast Delhi and appealed to the locals to maintain peace. Senior police officers also interacted with the locals.

The police also reached out to the members of the peace committees in the area in order to maintain law and order.

Stone-pelting and incidents of violence were reported from Daryaganj in Old Delhi and Seemapuri in northeast part of the national capital on Friday. On Friday, a clash between police and protesters had ensued in Daryaganj, prompting police to use water cannon on the agitators, some of whom had turned violent and set ablaze a car.