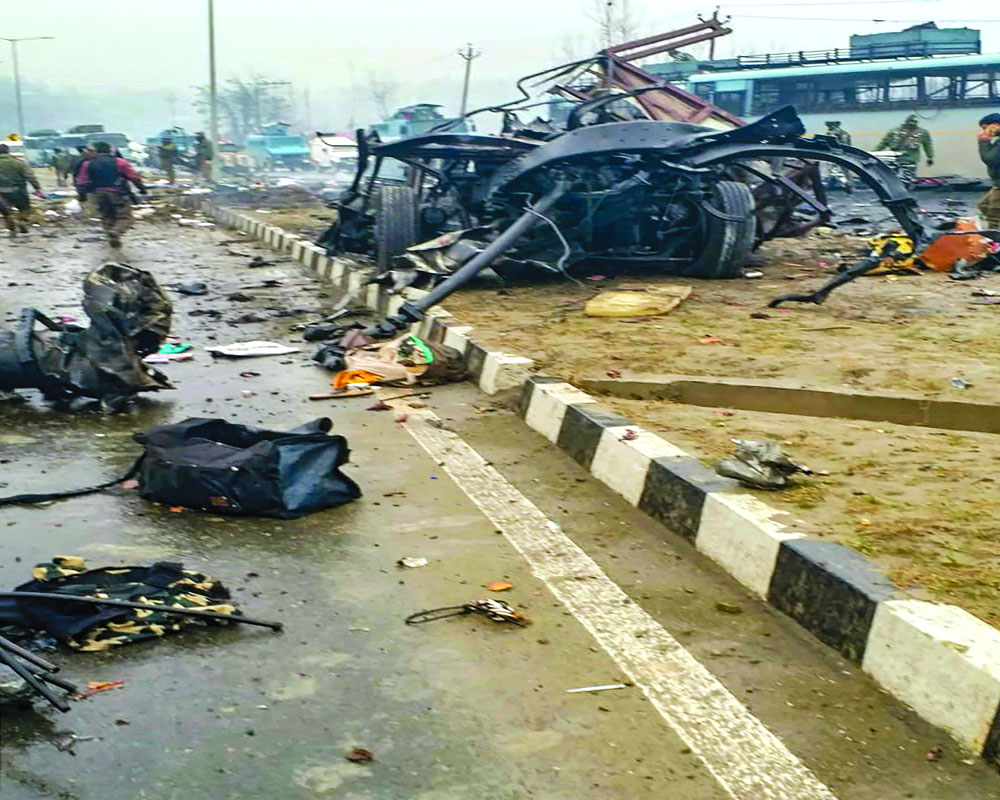 Asuicide attack killed 43 Central Reserve Police Force (CRPF) personnel in highway village of Lethpora in south Kashmir on Thursday as a suicide bomber rammed an explosive-laden SUV into a Srinagar-bound paramilitary convoy. This is the biggest attack on security forces in three decades of insurgency in Kashmir. Pakistan-based Jaish-e-Mohammad has claimed responsibility for the attack saying 21-year-old local terrorist Adil Dar carried out the attack.

Gory pictures of splattered body parts of the slain troopers, blood-soaked tattered clothes and mangled vehicles went viral soon after the afternoon attack that signals major shift in terrorists’ tactic in Kashmir. The all-time high fatal casualty figure even surpassed Uri attack on Indian Army on September 18, 2016 when 19 soldiers were killed by a group of LeT fidayeen.

Large scale condemnation has poured in against the attack. Home Minister Rajnath Singh is likely to visit Kashmir on Friday to assess the situation in the aftermath of the attack. Official sources said that an alert has been sounded in the Valley to check the escalating situation.

Sources said that 21-year-old local Jaish cadre Adil Dar rammed the explosive-laden SUV into a convoy of CRPF buses at Lethpora, 17 kilometres from Srinagar around 3.15 pm. The major impact of the blast was on a bus packed with off-duty troopers while four other buses in tow were also badly damaged. At least, two personnel deployed for road safety and not part of the convoy, were also killed. Sources said more than a couple of dozen personnel were wounded in the attack.

Most of the personnel died on the spot even as many injured were evacuated to hospital for treatment.

Attacker Dar hails from Kakapora village, 5 km from the blast site. He had joined the JeM in April last year. He is second Kashmiri suicide bomber who carried out attack on security forces. Afaq Shah, 21, had blown himself off outside the XV Corps HQ in 2000.

Sources said that Dar had recorded a video before embarking on the suicidal path and it was uploaded by his outfit almost simultaneously with the attack’s timing. Such was the bang of the blast that it shattered windowpanes of the houses in a diameter of 5 km and it was heard in many parts of Srinagar city. Sources said that more than hundred kg of explosive was used in the attack.

The attack was carried out at a time when security forces had upped the ante against ultras in the Valley especially in the south Kashmir region. The attack is also significant in the wake of preparations for the upcoming Assembly and parliamentary polls. Several top officials of the State led by Chief Secretary BVR Subramanyam are scheduled to hold a crucial meeting in New Delhi on February 18 to decide poll possibilities in the embattled State.

The security forces blocked traffic on the national highway after the blast leading to major chaos on the highway.

Sources said the convoy of 78 battalion was on way to Srinagar from Jammu. The convoy had started off the journey from Jammu at 3.30 am despite inclement weather and worse road condition. The Srinagar-Jammu National highway remained closed for most of the time during past three weeks.

“It was a large convoy and about 2,500 personnel were traveling in multiple vehicles,” CRPF DG RR Bhatnagar was quoted as saying. Sources said it was a convoy of 78 vehicles.